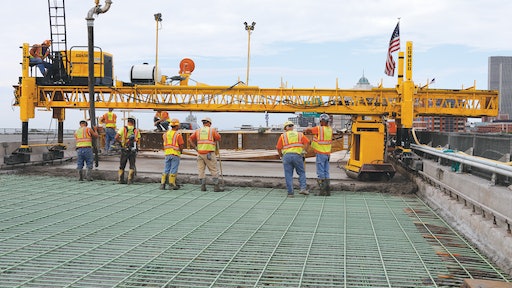 The C-450’s undercarriage is equipped with a 36-in. lowering kit, dual augers, 5-ft.-long externally-vibrating double cylinders and double float pans with a double burlap drag.

Placing a 350,000-square-foot concrete overlay on bridges and interchange ramps on I-787 in New York while working around tight clearance conditions, immense traffic and a tight completion deadline

“It’s a New York State Department of Transportation (NYSDOT) job that has to be done while we maintain traffic, very tight deadlines, very small windows to do the work in so we have a very rapid pace schedule,” Ken Blizzard, Project Superintendent for D.A. Collins, explained. “We’re using hydro-demolition to take 4 to 4.5 inches off the deck, remove all of the old rebar and remove all of the full depth joints, basically four feet wide by the width of the bridge. Once we get all of that done, we put our rebar back in and pour the new concrete overlay between 5 to 5.5 inches thick.”

The company, who has always used GOMACO C-450 cylinder finishers for their bridge deck work, added a new C-450 to its inventory at the start of the project two years ago. Last year, to help further accommodate the aggressive two-year completion schedule, D.A. Collins purchased another new C-450 for the I-787 project.

“We’ve been working with C-450s for a long time, so we’re very comfortable with them,” Blizzard said. “The new models are really nice. They have a little longer drum so it touches the concrete surface a little more. The new legs have the screw jack type legs versus the old hand crank and they work a little nicer.

D.A. Collins was only allowed a 6-inch wide granite curb to place their rails on. The curb was butted up against a concrete safety barrier further minimizing their working area.

The main bridge decks on the project average five to six lanes wide with a 10-foot shoulder. The on and off ramps to the bridge are roughly 25 feet wide. One reason D.A. Collins likes the C-450 is because it can easily be converted to the different widths each bridge requires. Framework sections can be added or removed to reach the required width. Also, the C-450s are equipped with self-widening capability allowing up to 10 feet of on-the-go adjustment.

During one phase of the project, D.A. Collins had just 76 days to remove and replace 90,000 square feet of bridge deck. The clock started ticking as soon as the first barriers were placed on the roadway separating out the construction zone from the live traffic traveling by at speeds up to 70 miles per hour.

The new C-450 at work on a 2,200-foot-long bridge was set up to finish three lanes of deck, 38-feet wide in each finishing pass. A concrete pump truck worked from down below, at street level, placing concrete in front of the C-450. The concrete was a NYSDOT required Class DP mix design created for overlays and high-performance decks.

“The Class DP mix uses smaller stones for the thinner overlays,” Blizzard explained. “It has a lot of microsilica in it and a lot of cement in it so it’s very sticky concrete to work with. Since it is extremely sticky, it makes it very hard to finish and seal up.”

To counteract the sticky issue, D.A. Collins asked the DOT if they could outfit their C-450s with an optional fogger system. A set of misters mounted to both sides of the undercarriage, ahead of the finishing cylinders, kept the concrete from sticking to the cylinders and helped create a smooth, sealed finish.

“The foggers are absolutely awesome, and I don’t think we’ll pour another bridge deck without them,” Blizzard said. “Before them, the concrete liked to tear open, and with the foggers the concrete just seals right up.”

The C-450’s attachments and finishing capabilities have allowed D.A. Collins to reduce the number of laborers they have on each bridge deck pour. The foggers were just part of the equation. They also liked the float pans and double burlap drag to help them achieve just the right finish that NYSDOT requires on their bridge decks.

“We’re about as lean as you can get on a concrete crew and we have some automation things we’ve hooked up to the C-450 and let it do the work,” Blizzard explained. “We place the concrete, the C-450 knocks it off and finishes, and the double turf drag gets the right texture that the state likes to see. They’re very happy with it and it eliminates a guy off our crew. It also gives you a nicer finishing job because you’re not pushing and pulling manually. It’s all mechanical and once you get it set up, it’s very efficient and does a nice job.”

On an overlay project, average production isn’t measured by yardage, it’s measured by the length of the pour.

“I’m pretty happy if we’re pushing 60 feet an hour with the machine,” Blizzard said. “Sometimes we get a little faster, but if we’re doing a 360-foot pour for the day, from start to finish which is set up to clean up, we’ll do it in about 7 to 7.5 hours. Our guys are working smart up there, they aren’t having to work too hard. The GOMACO C-450s make it easy.”

Ten feet behind the C-450, workers used a GOMACO Spanit Work Bridge to place wet burlap and soaker hoses for a seven day wet cure. After curing was completed, saws were brought in for a longitudinal grooving. Once it’s grooved, the whole deck was washed, cleaned, dried off and a waterproof seal was applied before the newly overlaid lanes were opened to traffic again.