How to Cool Concrete During Placement

When project specifications required cooling of the concrete during the curing process for a high-profile construction project in downtown San Diego, the contractor was unfamiliar with the process and needed technical support. 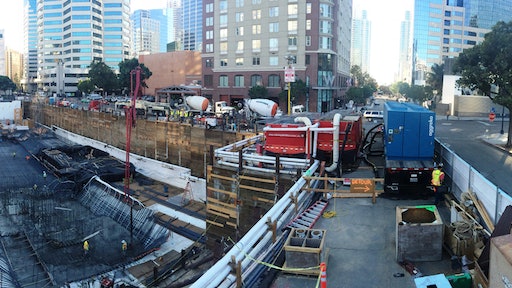 Aggreko provides temperature control solutions for the construction industry; a project for the San Diego County Superior Court is shown above.

With 6,800 cubic yards of concrete to be placed, enough to cover two-thirds of the full-city-block site, the contractor could not afford a misstep. Even the smallest error could compromise the building structural integrity and would be detrimental to the contractor’s reputation.

Placing concrete at a lower initial temperature reduces the tendency of concrete to form micro fractures. The chemical reactions occurring as concrete is curing and hardening creates a considerable amount of heat.  This hydration reaction causes the concrete temperature to rise by as much as 45-degrees Fahrenheit during the curing process increasing concrete volume. After curing, the concrete cools down, reducing its volume, causing the concrete to crack.

The contractor needed a cooling solution to reduce the initial concrete pour temperature by 30-degrees Fahrenheit. The temporary equipment would need to fit within a very limited space at the jobsite.

Aggreko teamed up with the contractor to develop a solution that consisted of one 300 ton chiller and a pump to cool the water in the contractor’s 10,000 gallon tank. Aggreko also provided a 1,000 GPM pump with a VFD (Variable Frequency Drive) to circulate the chilled water. The VFD allowed the contractor to adjust flow for the smaller jobs or to shut down the flow when needed.

Aggreko was able to design, deliver and install a custom cooling system that complied with the required specifications. As a result, the contractor was able to successfully complete the foundation cement pours within the temperature specification.

Steps you can take to pour flat and level floors under the unique challenges of working three, four – or 25 – stories up
Jonathan Kozlowski
May 26, 2021
Follow Us