Contractors were faced with the challenge of placing concrete in an underground shaft for a subway expansion project in North Toronto. Read how Aggreko was able to provide a solution without further delays to the project. 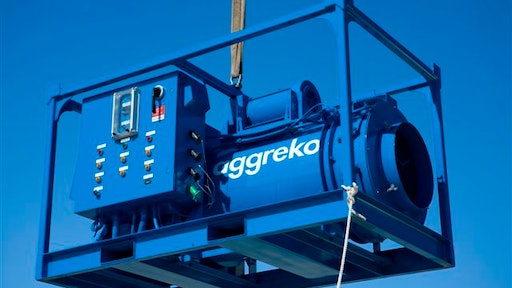 There were a number of significant challenges for this project, the biggest being the sheer size of the jobsite. There were nine different areas where they were placing concrete, covering one-half mile. There were also some challenges placing the heaters 150 feet below ground. Once underground, there were also issues with hanging cable to avoid placing too much weight on them. The generators encountered problems starting and stopping due to the cold weather.

Aggreko was able to provide a solution that consisted of nine 150 kW heaters and three 300 kW generators with auxiliary fuel tanks. Each generator was capable of powering two of the 150 kW heaters. The remaining three 150 kW heaters were powered using site utilities. Since the heaters require 480 V, step-down transformers were used to reduce house voltage from 600 V to 480 V.

Aggreko craned the equipment down the shaft and then ran hose/cables between the generators and heaters. The customer used their own electricians to perform all final connections and grounding. Duct work was routed to provide heated air at strategic points throughout the shaft. Once in the shaft, the heaters were put on skids so a fork lift truck could move them around as required.

Aggreko was able to design, deliver and install a custom heating system that complied with the required specifications. As a result, the temporary heaters sped up the curing process which allowed contractors to complete the expansion project with no further delays.