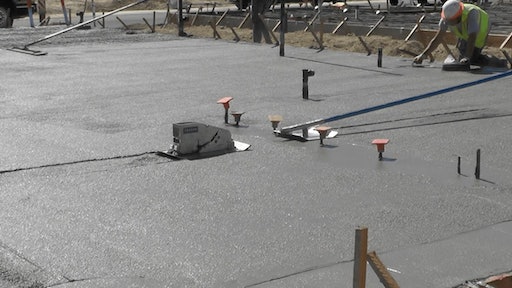 Trak Joints was named the World of Concrete Most Innovative Product in 2018.
Aaron Hilbert

A California-based consultant with 52 years of experience in the concrete industry has invented a device that, he says, makes installing ground slab joints easier, cheaper and safer than using traditional saw cuts.

“The kind of work that I do as a concrete consultant has a lot to do with concrete cracking problems and concrete slab cracking problems,” says Harvey Haynes, inventor of Trak Joints. “Quite a few years ago, I realized there's got to be an easier method, a better method of putting joints in concrete that's going to be so much less expensive.”

After a few years of trial and error in his garage, he came up with Trak Joints, a contraction joint system for residential concrete slabs. Compared to saw joints, contractors can install more joints with Trak Joints, he says. 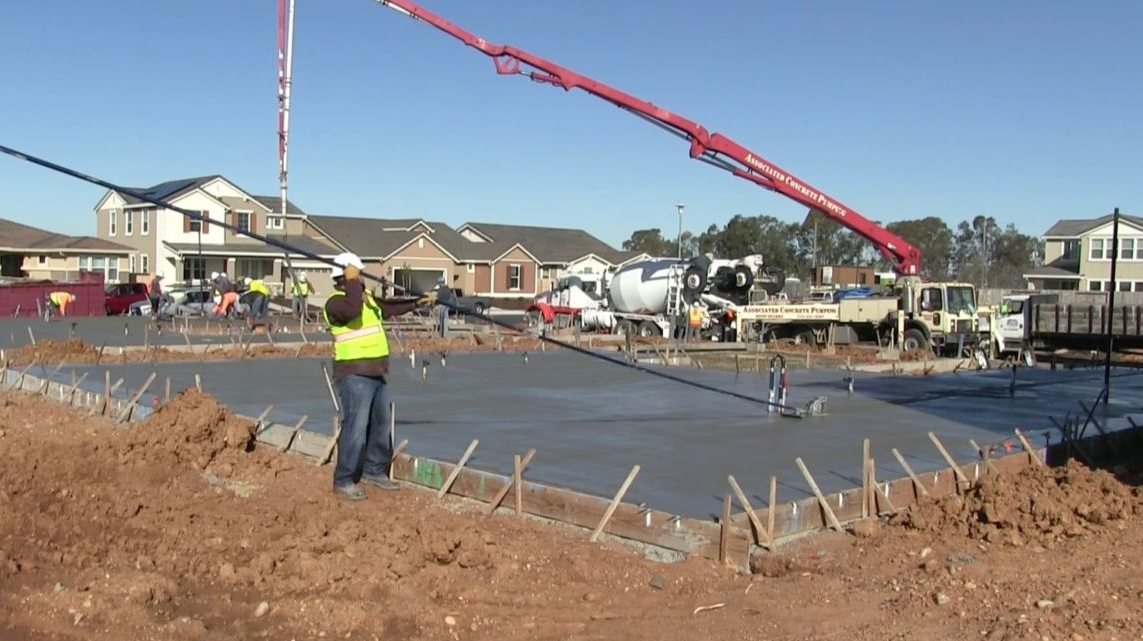 “That's one of the things that happens today, when you're doing saw cuts, they’re expensive,” says Haynes, who has earned 15 patents. “So you try to minimize the amount of saw cuts you put in and the spacing of the joints can get too far apart; where the closer together the joints are located, the better chance you have of not getting random cracking. The spacing of joints is really critical, is really important.”

“Joints are needed in concrete slabs in the ground because when concrete dries out — not hardens but when eventually whatever water is in concrete during the mixing process when that starts evaporating and leaving from the concrete — the material shrinks,” Haynes says. “It gets a volume decrease, and cracks are going to occur in the slab randomly; and people tend to not like the random cracks. A way of minimizing the random cracks is by intentionally installing these contraction joints.”

Haynes and his son, Benjamin Haynes, created the company Aaron Hilbert (a combination of their middle names) to sell Trak Joints. The first product model was completed in 2011, and a patent was granted for the design in 2014. Trak Joints was named the World of Concrete Most Innovative Product in 2018.

How Do Trak Joints Work?

Trak Joints are installed using a manually-operated tool, called the Traker, to embed a strip of plastic tape into fresh concrete, earlier in the process than saw cuts.

“The product is the whole tool, it's actually a whole method of installing contraction joints in concrete slabs in the ground,” Haynes says.

When the Traker is in operation, a roll of tape rides on an insertion disc. As the Traker moves forward across a slab, friction between the insertion disc and concrete causes the disc to rotate. A strip of tape is spooled off the roll and folded as it is embedded into the concrete.

The tape remains in the slab to create the weakened plane where the crack will occur. Slab finishing operations are performed over the embedded tape.

Concrete slabs typically experience shrinkage of 1/8 inch for slab sections 20 feet long. If joint spacing is 10 feet, then each joint would open 1/16 inch wide. Comparably, saw cuts are typically the width of the diamond blade at 1/8 inch, plus the shrinkage amount at 1/16 inch, for a total 3/16 inch. If joints are to be filled with epoxy or polyurethane, less material is needed to fill Trak Joints, Haynes says.

The Traker can install contraction joints from 1 to 2 inches deep. This relates to slabs 4- to 8-inches thick. The depth of the insertion disc is adjustable to allow for the different contraction joint depths.

Typically, one or two workers operate a Traker on a worksite, he says.

Slabs containing radiant heating tubes are another application where the possibility of a saw blade nicking a tube is eliminated.

In the pavement field, Trak Joints can be used in lean concrete bases and city/county roads.

When used in roads, an advantage is minimizing rainwater entry into the joints, where flooding the sub-base area can create pumping problems. The tape prevents rainwater from getting to the base. When residential slabs are exposed to weather, the tape also keeps the base dry. This is important in minimizing later problems with water vapor emissions under floor coverings.

“A big thing these days is it doesn't produce any dust,” he says. “Silica dust is created when you saw cut concrete, and that dust has a health hazard. OSHA (Occupational Safety and Health Administration) has come in and recently, within the past couple of years, put some strong stipulations on contractors on how they have to capture that dust and can't let their employees be exposed to too much dust. Our method kind of avoids that ,and it's a real advantage."

The final rule on Occupational Exposure to Respirable Crystalline Silica was published in 2016 to curb lung cancer, silicosis, chronic obstructive pulmonary disease and kidney disease in America's workers by limiting their exposure to respirable crystalline silica. The rule is comprised of two standards — one for construction and one for general industry and maritime. 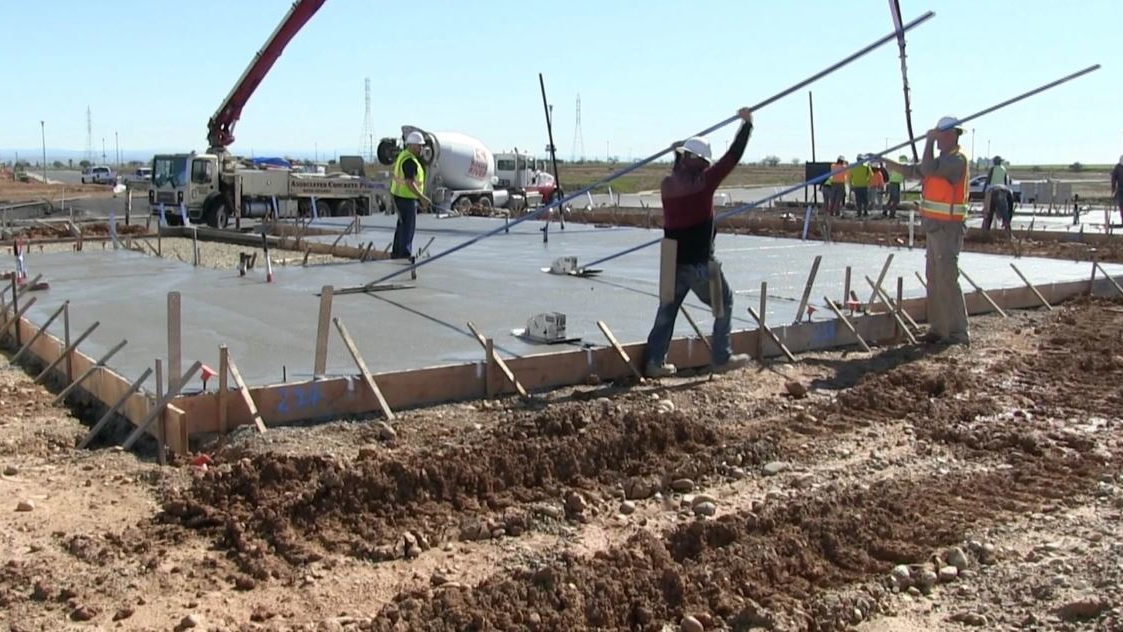 One to two workers typically operate a Trak Joints system on a site.Aaron Hilbert

Challenges of the New Product

So why don’t you see Trak Joints on every shelf at your hardware store?

Haynes says the joints can, at times, be a hard sell because they involve a change in procedure at sites.

“Usually there's about 10 late finishers and laborers on the jobsite,” he says. “And they each know their job. Timing with concrete is really important, depending if it's a hot day or a cold day, how they move, when they have to get back on concrete to finish it. Everybody just knows their job, and it becomes a sequence. So, to interrupt that sequence throws things off for awhile.”

“For the first slab that has been cast, once that concrete is on the ground, you want to put the Trak Joints in, if it's a hot day, within a half an hour,” he says. “So somebody, one of the workmen, one of the finishers, needs to stay with that first slab or go back to that first slab and put the joints in it. That would be a break from the way they're doing it now. If it's a cold day, where you don't have to worry about the concrete stiffening up very quickly, well then you don't have to come back to the slab. You can come back to the slab two hours later and still be able to put the joints in.”

Another hurdle for the inventive family is marketing. The small company built a website and recorded videos of how the Trak Joints work, but driving people to the site is not an easy task.

“We don't have that kind of response,” Haynes says. “When we were at the World of Concrete, it really was phenomenal the number of contractors we had around our booth just saying, 'Oh, this is incredible. What an invention,' you know, so people get it right away.”

Trying to sell it on an every day basis is tough, he says.

“What we're encountering out in the field is contractors have their crews, they're used to doing it a certain way and now to change and start doing it a different way is really disruptive to the production work,” Haynes says. “There are some contractors out there that have made that transition, and when they make the transition, it's like, ‘yes, wow.’ They really liked the tool and then the method and they're staying with it,” he says. “But it's getting that initial transition, that change, is what we're encountering.”

Haynes says he and his son will travel to demo how the Trak Joints work.

“That is something we are really open to do because of the importance of somebody seeing this in action,” he says. “We will come out and we will do a demonstration.”