Putzmeister reached a world record vertical concrete pumping height of 1,988 feet during the construction of the world's tallest building. 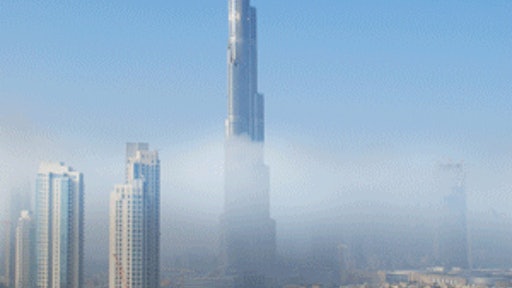 "This extreme pump height was possible due to the trust and cooperation developed between the Samsung-led team, the concrete supplier and pumping service for the project, Unimix, the local Putzmeister agent German Gulf Enterprises (GGE), as well as Putzmeister Concrete Pumps GmbH," says Christian Stirm, application engineer at Putzmeister's global headquarters in Aichtal, Germany.

To achieve the concrete record-breaking height for the three-winged tower located in central Dubai, both Putzmeister Aichtal Works and GGE started preparations in early 2005.

"We conducted extensive tests with the BSA 14000 HP-D pump and delivery line on site," says Stirm. "The tests were conducted with horizontally laid pipelines to simulate the pressure behavior and expected friction of the concrete in the pipeline based on concrete mixture breakdowns, as well as converting it to the high-rise pumping."

Putzmeister was faced with the challenge of creating a new, super high-pressure trailer pump, the BSA 14000 SHP-D, specifically for this project. The pump's frame and hopper were reinforced in order to withstand the enormous forces of the concrete mixtures. Other characteristics of the new pump include: adjusted S-Valves and S-Valve bearings for the expected pressures and a high-tech filter system.

BSA trailer pumps were combined to create one pump station for this project. The pumping station pumped approximately 5,826,920 cubic feet (165,000m3) of high-strength concrete during the 32 months of operation.

Three of the trailer pump delivery lines were connected to the three MX 28-4 T placing booms, which were secured on platforms of an auto-climbing formwork and stood on 52-foot-high (16m) tubular columns for the structure's wing sections.

Throughout the entire project, only high compressive strength concrete mixtures were used and pours were only done at night because of hot temperatures during the day. Concrete was chilled in the concrete plant prior to preparation and part of the water was replaced with shards of ice, allowing the concrete to be transferred at 82°F (28°C) (nighttime temperatures in Dubai usually reach 104°F) to the project site.

"Each batch of concrete was monitored and logged in the plant," comments Stirm. "Before transferring the concrete to the pumps, the temperature and flowability were checked regularly and sample cubes of the batches were poured to check pressure.

"Putzmeister engineers developed a unique delivery line system where the line's wear behavior, its compressive strength and routing throughout the structure was considered."

As fireworks adorned Burj Khalifa from top to bottom at its grand opening on January 4, 2010, there was much to celebrate:

Billed as "a living wonder," "stunning work of art" and "incomparable feat of engineering," there is no doubt that Burj Khalifa has pushed Dubai into the international spotlight. As thousands of workers brought to life the world's tallest building, Dubai's innovative spirit was also born.

About Putzmeister
A division of one of the world's most well-recognized and respected heavy equipment manufacturers, Putzmeister Concrete Pumps GmbH, Putzmeister America, Inc. manufactures a complete line of truck-mounted concrete boom pumps, separate placing booms, truck-mounted telescopic belt conveyors, and trailer-mounted concrete pumps as well as mortar, grout, shotcrete, plaster and fireproofing pumps and mixers, industrial pumps, tunneling machinery and pipeline systems. Some of the industry's best known brands such as Allentown Shotcrete Technology, Esser Pipe Technology, Thom-Katt, Powercreter and Telebelt are part of the Putzmeister America family. The company's workforce is dedicated to hands-on customer support and advancing the industry in design and technical innovation.