Home of the Green Bay Packers requires pumping more than 6,000 yd. of concrete as part of an expansion project to add 7,000 seats 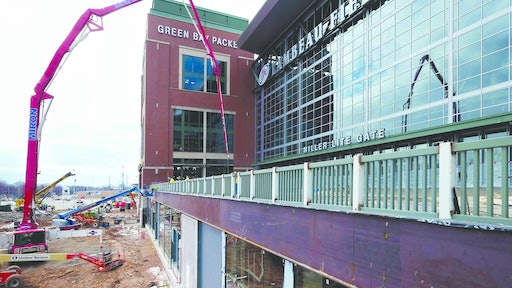 Putzmeister’s 52Z-Meter Truck-Mounted Boom Pump was used on all phases of the Lambeau Field Development project.

Known as “The Frozen Tundra,” Lambeau Field, home to the National Football League’s Green Bay Packers, has sold out every single game since 1960. Demand for tickets remains high, with more than 112,000 names on the season ticket waiting list — an average reported wait time of more than 30 years. Thus, adding seating capacity to the stadium has been a high-priority initiative. A plan was developed and put into motion in early 2012 to add 7,000 more seats for eager fans. To place the more than 6,000 yds. of concrete for the project and to reach the highest elevation of 152 ft. on the South End Zone, Neenah, WI-based Miron Construction Co., Inc. (Miron) utilized a Putzmeister 52Z-Meter truck-mounted boom pump.

In addition to the South End expansion, over the past few years, Lambeau Field has undergone numerous upgrades, including adding a new team area and expanding an entrance. Over the past year, the facility added a new east gate – the American Family Insurance Gate - built a new Harlan Plaza and Packers Pro Shop and will complete a build-out of a restaurant and Hall of Fame. Miron has used, or will use, the 52Z-Meter on each of these phases.

“The expansion and renovation of Lambeau Field is a project that has improved the game day experience for all our fans,” said Packers President/CEO Mark Murphy. “It was important to not only improve the experience, but we also were able to bring more fans to games with the addition of the South End. It’s improved our home-field advantage and makes the environment even more electric.”

After the old scoreboard was removed, structural steel was erected in five different sections. Because the new scoreboard had to be installed by a certain date — much sooner than the rest of the project would be complete — the center section of the steel that would hold it had to be erected first. The crew worked with engineers to put in temporary framing on levels seven and nine, and poured concrete prematurely on level seven in order to get the scoreboard up on schedule.

“Logistically, it was a challenge to erect the massive scoreboard before the rest of the structure was in place,” said Murphy. “It took a lot of planning and coordination, but the end result was a success.”

The crew knew it would be a challenge to add the weight of the concrete on top of the massive 5,500 tons of steel required to support the new structure. A lightweight concrete mix would prove essential.

Level by Level, Seat by Seat

After reinforcing the structure, the crew prepared to place concrete for the seven stories of seating areas and concourses they were adding to the top of the South End. They were on a tight schedule, as certain parts of the project needed to be operational for the Fall 2014 football season. This part of the project was also built in sections, so the Packers had access to them, even while the rest of the project was still under construction.

The structure and beams for the seats were set up for Miron; now, the concrete just needed to be placed. The boom of the 52Z-Meter was able to reach all the way from ground level up to level nine, nearly 120 ft. in the air.

“The 52Z-Meter’s long reach worked out perfectly for this project,” said Murphy. “We were extremely happy with the pump’s performance at that great height.”

“We knew the project and the timing was going to be a challenge in many respects,” the Packers’ Murphy said. “We needed to continue to play games and work in the stadium, and the construction team did a phenomenal job making that happen. We really appreciate everyone’s professionalism. It was seamless from our end.”

The existing weight of the stadium structure being added onto made the use of a lightweight concrete mix essential. Miron worked closely with the team at Carew Concrete & Supply Co. for months to develop a special mix, plus admixture called ELEMIX, that would work for this application.

“Not only did the concrete mix need to be lightweight due to the mass of the structure, but it also had to be adjusted to enable it to be pumped to high elevations for the seating areas,” said Murphy.

ELEMIX is a concrete additive made of specially engineered polymeric spheres (lightweight synthetic particles) that disperse uniformly throughout a concrete mix to replace a significant volume and weight of both normal and lightweight aggregate. It evenly disperses throughout a mix to ensure uniform strength. When designing low-density concrete, ELEMIX can assist in the controlled reduction of concrete density, an essential component to this project.

“As far we know, ELEMIX has never been pumped to these heights — a maximum of nearly 120 ft.,” said Murphy. “It was quite an accomplishment to have created just the right mix for the height and weight of this project.”

The South End expansion added 336,000 sq. ft. to Lambeau Field’s previous size of 1.7 million sq. ft. The project featured approximately 7,000 new seats, all theater-style chairs with backs, with many providing a stunning aerial view of the historic stadium. Roughly 5,400 of the 7,000 seats are considered general seating, with the other 1,600 in the premium category as club seats or terrace suites, as well as sponsor and partner areas.

All phases of the Lambeau Field Development project should be wrapped up in mid-2015.