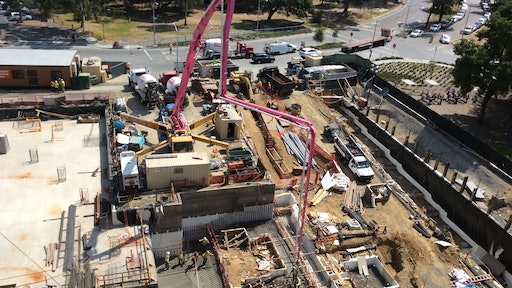 Placing more than 7,700 cubic yards of concrete including footings, slabs, walls and decks for eight stories of the expansion of the Lucile Packard Children’s Hospital Stanford.

The $1 billion expansion of Lucile Packard Children’s Hospital Stanford (LPCH) in Palo Alto, Calif., will add more than 500,000 square feet to the existing hospital facility and will include advanced technologies, more private patient hospital rooms, an environmentally sensitive design and expanded clinics. Jos. J. Albanese, Inc. (JJ Albanese) was chosen to complete the structural concrete for the new facility. The company is using two Putzmeister America, Inc. pumps for the project, including its new 56Z-Meter truck-mounted concrete boom pump, which features a boom that was painted pink in honor of breast cancer awareness.

The project’s general contractor, DPR Construction, selected JJ Albanese for the concrete work, which includes footings, slabs, walls and decks for two levels below ground and six levels above ground.

Since fall 2014, JJ Albanese has been using two of its Putzmeister pumps for the project, a new 38Z-5-Meter truck-mounted boom pump and its 56Z-Meter with pink boom. Together, the pumps will place more than 7,700 cubic yards of concrete at the hospital site.

Due to the fact the LPCH project is an expansion of the existing hospital that is still up and running while under construction, the crew faced multiple logistical challenges. The workers were not allowed to block off any streets and had to stage trucks a block away from the site.

“Placing concrete in a high-traffic area is always difficult,” said Dugan. “Adding in the regulations surrounding a working hospital makes our job even more challenging.”

In addition to the space around the site being limited, real estate on the construction site itself also was in short supply.

“Early on in the project we had lots of space to use as pumping platforms,” explained Dugan. “But, as the project has gone up, we have lost most of that space and have been confined to pump from a couple of small areas. The smaller footprint of the 56Z-Meter fits in these locations, while still allowing us good reach to get the concrete where it needs to go.”

The 56Z-Meter’s compact design offers a reduced footprint of 18 feet 8 inches front and 27 feet 3 inches rear spreads, yet it still has a vertical reach of 180 feet 10 inches and a horizontal reach of 163 feet 10 inches. JJ Albanese’s crew found the Z-Fold design of the 56Z especially helpful for this project.

“The Z-Fold has allowed us to reach inside the building, as needed,” said Dugan. “For example, we had a pour that required the system to run through the building envelope. With a typical boom, we would have had to place the tip at the exterior of the building and run a hose all the way through. With the Z-Fold, our operator was able to unfold the boom inside the building and get much closer to the pour. This cuts down on time and allows the pour to go more smoothly.”

The design of this particular project required a range of 11 different mixes with both normal and lightweight concrete of varying strengths — from a self-consolidating mix to 4,000 to 8,000 psi mixes.

“The 56Z-Meter has easily handled the variety of mixes,” said Dugan. “That’s a testament not only to quality equipment, but also to our operator. He knows how to handle the pump, as well as the concrete.”

The pour schedule has been aggressive and varied. The crew has poured at all hours of the day, and at night. They have had pours every day of the week and even multiple pours in one day. The Putzmeister pumps have been consistent and have kept them on schedule.

Upon its 2017 debut, the LPCH expansion will add 150 patient rooms, office space and 3.5 acres of healing gardens and green space. The state-of-the-art facility’s adaptable design will accommodate cutting-edge protocols and equipment as they develop, offer patient rooms with windows overlooking the gardens, and feature public spaces with large windows and access to decks and patios.