On October 29, 2012 Hurricane Sandy battered the Jersey Shore area in New Jersey. Susan and Walter Smith’s 1953 bungalow was located in one of the hardest hit areas and it took them three weeks just to get back to their house to see the damage. 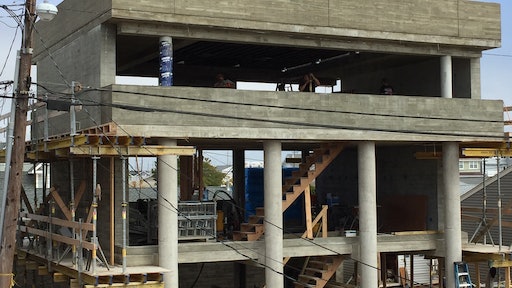 The top floor of the house is where the master bedroom is located. Three steel containers were lifted into position to form the bedroom walls. The doors at either end can be opened to view the ocean and allow breezes to flow through.

On October 29, 2012 Hurricane Sandy battered the Jersey Shore area in New Jersey, bringing in four-foot tidal surges that dislodged many homes from their foundations. Homes slid into the bay, floated onto streets, and most in the area filled with water. Susan and Walter Smith’s 1953 bungalow was located in one of the hardest hit areas and it took them three weeks just to get back to their house to see the damage. Walter said the front door was swollen shut, the contents were destroyed, there was structural foundation damage, and the electrical and mechanical systems were beyond fixing—their house, and his mother’s house next door were completely destroyed.

In the months that followed the hurricane the government changed the base flood elevation, meaning that new homes had to be built to new guidelines. Walter and Susan owned an architectural firm called Education Lab Architects, Stamford, Connecticut, and he says it was a good time to be an architect because everyone in the area who wanted to rebuild had to hire an architect to start the process.

The first question the Smith's asked themselves was “what was the right thing to do?” They loved the beaches and sunrises in the Jersey Shore area and wanted to keep living there. But to continue there meant building a new home that could to be able to withstand future weather events. So they decided to build a concrete house.

Architectural concrete
As an architect Walter has always liked concrete as a building material so this construction also provided the opportunity to play with ideas; creating any shapes that could be formed, designing surface textures that included diamond polishing, board-formed imprinting, and sanded finishes. For example, wall-tie holes are normally filled in afterwards with concrete patches but the Smiths created acrylic “light spikes” that fit into the holes, allowing one to see light patterns on the walls—glowing points of light from the outside light during daylight hours and outside glowing patterns from inside light at night.

The decision to have “board-form” wall surfaces—textured wood grained boards placed inside the wall forms as formliners to create wood patterned walls—influenced many decisions about construction methods. At some locations they wanted the board-formed look on both sides of walls.

Wanting concrete to be visible on both sides of walls drove the decision to use the Thermomass wall insulating system which locates ridged foam insulation in the center of walls so that reinforced concrete remains exposed on both sides. For the construction of both walls and floors rough electrical and plumbing were placed inside the concrete for the same reason.

Building sustainable
Building sustainable structures is an important concept today. Buildings that are resistant to destruction caused by fire, flooding, wind, and seismic activity can last a very long time and are more sustainable. Considerable energy is consumed in the production of concrete compared to other building materials but this initial energy becomes minimal when structures have long life spans, compared to materials with lower initial energy requirements that don’t hold up as well. This home, set in a sensitive area, is sustainable.

Also important is energy efficiency and the Smith's also wanted to build a home that was energy efficient. They achieved this by using concrete, because it has thermal mass, air can’t “leak” through it, and by including high R-value insulation in the walls and decks. Also, by including a radiant floor heating system—easy to do with concrete—heat will be more uniform throughout the house.

Construction
Construction in an environmentally challenging area is more difficult and often more expensive. Finding contractors experienced with building concrete housing was difficult too. The Smith's found Claudio Ripoll, owner of Compass Path HC, Point Pleasant, New Jersey, to manage the construction. Ripoll says he owned a concrete construction company for thirty-two years and liked the challenge of this project. His son Ryan owns JRR Masonry and performed all the concrete work.

Here are some of the challenges faced in the construction of the house.

The first floor (deck) of the house is nine-feet above ground elevation and is supported by eight one and a half-foot diameter concrete columns supported by the grade beams which rest on the pilings. The insulated, epoxy coated rebar highly reinforced deck, is a primary structural component that ties columns together and gives the house rigidity.

Forming systems. Doka USA, which supplies forming systems for commercial and some residential construction, supplied the forms needed for this project: columns, wall-form panels, and deck forms. Dan Kent, a technical sales manager for Doka, says they looked at the plans for the house and provided Ripoll with form layout drawings. The wall form panels had plywood faces so that workers could nail picket fence boards to them—after trying out many kinds of wood the team determined that fence boards provided the best board-form texture.

Doka rented the forms for the project by the month

Concrete. There were several requirements for the concrete mixes used. Columns and decks required 5,000 psi strength, walls required 4,000 psi, and due to proximity of the ocean 5,000 psi air-entrained concrete was decided upon for exterior slabs. Mixes were designed to be pump-able too as nearly all concrete was pumped, Ripoll says 32-feet was the highest they pumped. Cole Fischer, territory manager for Clayton Concrete, Lakewood, New Jersey, says they designed 3/8 inch aggregate mixes that could flow around congested reinforcement, small tight spaces, and that could easily fill the board-form textures. Ripoll used a combination of stationary form-mounted vibrators and internal stick vibrators to consolidate the fresh concrete.

Clayton Concrete is one of the few ready-mix producers in the U.S. that produces its own admixtures and several were used for this job. They included:

A bit unusual for residential construction, concrete mix quality was monitored at the batch facility and on site for air entrainment, water content, and slump design criteria. Cylinders were taken by Clayton Concrete at the site and tested for strength at seven and 30 days to confirm proper strengths

Features of the home
The home has three floors; two are concrete and the top floor includes three 20 feet long steel high-cube shipping containers placed side-by-side over an open part of the floor. The interior steel walls were removed to create a large master bedroom. The steel doors at either end can be opened to allow the ocean breeze to blow through and for the view. An open 650 square foot concrete fenced terrace surrounds the bedroom.

Four concrete beams connect the columns on the first level of the house. Part of this floor is living space and part is a balcony overlooking the back yard. Cast-in-place planters are included in the rear perimeter wall that defines the property.

All the floors in the building are diamond polished concrete floors. This lends to the sustainable nature of the home, allows better heat transfer for the floor radiant heating system, and provides an easily maintained concrete look.

The Smith's are pursuing a LEED Platinum qualification for the house. A hydronic geothermal heating/cooling and domestic hot water system will extract energy from water circulated through loops of deep ground pipes. Energy requirements will also be minimized by taking advantage of the thermal mass of the concrete—it’s ability to store energy—and the center panel insulating system.

At a time when many people in the U.S. dream of owning huge homes with many more rooms than they need made with wood and drywall, it’s refreshing to hear about homes that are built for the ages, homes that can keep its occupants safe from natural disasters, homes that consume minimum amounts of energy, and homes that embrace creative ideas. The Smith's wanted something that looked clean and modern, a house full of creative ideas. From the beginning they said they liked the light, natural simplicity of concrete. Their new home wins on all counts.

The Smith House at a glance