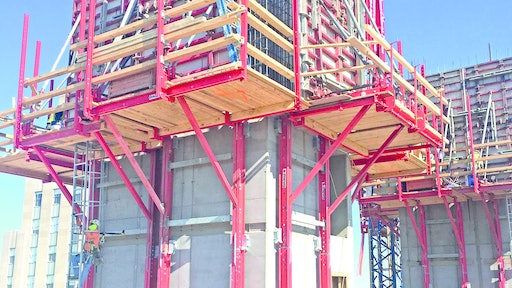 Each MGC unit remains attached to the structure even during lifting thanks to its two guiding profiles. The wall formwork is placed on and attached to the platform. It can be retracted for rebar work and for the climbing process. The MGC unit and the wall formwork are lifted as one single unit. The platforms can be equipped with standard frailings and also with a mesh. Ladders and safety cages ensure safe access to the platforms.
MEVA Formworks

Ground broke on the new One City Center, also known as the “Durham City Center” in Durham, North Carolina in February 2016. Located in the heart of downtown, steps away from the theater district, this 350,000-plus square foot, 27 story building will feature 130,000 square feet of retail and office space, two levels of parking, and 21 residential levels complete with a rooftop pool. When completed, it will be the tallest building in Durham.

One City Center is built on the site of the old Woolworths building and is made entirely of cast-in-place concrete. Confined construction space is always a challenge in urban high-rise construction – and MEVA provided a complete solution for the contractor from the basement to the roof.

The first challenge that contractor Lithko faced was there were other buildings located very close to the construction site, limiting access for large equipment such as cranes to be on site or move – making one-sided concrete pours and a versatile wall formwork system a necessity to pour the basement/underground parking levels and the structural columns. The job required 75’ long and 25’ high single-sided wall pours on the lower levels, and MevaLite wall formwork in combination with STB 450 support frames provided the total solution.

MevaLite wall formwork for work without a crane

At only 7 to 10 lbs. per square foot (depending on hardware), the MevaLite hand-set clamp system was designed especially for concrete works where assembly and stripping are done without a crane. The two-chamber aluminum hollow profile allows for panels to be handled by hand with as little as one worker, while still achieving a sturdy pressure rating of up to 1,350 psf.

STB 450 frames can be used for pours up to 16’ and extensions are placed in 5’ increments from the top, allowing the base unit to stay intact for pours up to 38’. The frames are only 7-10.5’ wide at the base, making the STB 450 support frames the best choice for the confines of the One City Center jobsite.

According to Lithko Project Manager Andy Lindsey, “The selection and use of MEVA Formwork for the Durham City Center project was based on the flexibility of the single-sided wall formwork utilizing either MevaLite or Imperial to pour the 25’ tall single- sided walls around the entire lower level parking. Based on the confines of the jobsite, the MevaLite product line was the best option for structural columns up the entire building.”

The building floor slabs were completed using a combination of the MevaDec slab formwork and MEP shoring. For the first six levels of construction MevaDec was used; chosen by the contractor both for its ease of use and for economy. With no fixed grid, MevaDec can switch direction to easily adapt to any slab layout and reduce filler areas. MevaDec does not require a crane and can be easily set by as little as two or three workers. This system combination includes a drop head that lowers the panel by 7.5” to allow for early stripping and cycling – saving Lithko time, labor, and material. In addition, MevaDec comes standard with the alkus all-plastic facing that delivers an even concrete surface and, unlike plywood, lasts as long as the panel frame, saving additional money and natural resources.

At the seventh level of construction, a transfer slab to help support and evenly distribute the weight of the remaining 21 stories needed to be constructed. The slab contained 1,800 cubic yards and 450,000 lbs. of reinforcing steel over 20,000 square feet with 5’ drop beams. MEP shoring was used to carry the heavy weight of this undertaking.

On the safe side with the MEVA Guided Climbing system (MGC)

Andy Lindsey notes, “MEVA’s MGC along with Imperial formwork proved to not only be an efficient product when advancing the cores ahead of the decks in the tower levels, but also provided the safety factor that we consistently achieve on our job sites.”

Imperial wall formwork for the cores

Heavy-duty Imperial wall formwork was used in combination with the MGC system for the outside of the cores and the MEVA Flipper Beam inner shaft platforms. Heavy-duty Imperial with a pour rating of up to 2,025 psf aligns and securely connects panels with the MEVA clamp, and the multi-function profiles with welded-in DW nuts allow for easy attachment of all accessories with a standard flange screw, reducing consumables and easing logistics.

The new Imperial stripping corner inside the cores

Flipper Beams inside the cores

The MEVA Flipper Beam inner shaft platform is made with steel double C-channels that are custom-built and sized to job requirements. The platform is designed for a live load of 50 psf and to support the weight of formwork. The platform and inner shaft formwork including the stripping corners can be cycled together in a single pick; reducing work, saving time and enhancing safety.

Ultimately, Lithko was extremely satisfied with MEVA’s comprehensive answer to the requirements of One City Center’s construction, and they appreciated the “outside the box” thinking that MEVA presented to give them the best opportunity for success. They also greatly appreciated MEVA’s staff and their complete willingness to go above and beyond business as usual to ensure that they were successful in all matters on this job.

“Utilization of sales representative Matt Woodlief during the planning phase, as well as his dedicated weekly visits to the jobsite continues to ensure optimal use of our on-site MEVA products and he in turn helps identify materials that can be returned after their scheduled use to avoid unnecessary costs,” Lindsey says.

Designed to perform at higher levels, the TITAN XL shoring system is created from lightweight aluminum but can carry heavy loads and decks up to 24’ 7” (7.5 m) with the TITAN HV Drophead.
Titan Formwork Systems LLC
September 28, 2017

The patented Beam Bracket was developed for use with the TITAN HV Shoring System.
Titan Formwork Systems LLC
September 28, 2017

Four contractors were able to take advantage of reusable forms on their varied paving projects.
June 7, 2017

Trimble Corporation decided to build onto their Tekla software to provide concrete contractors with easy-to-use software that plans for and manages all aspects of the forming and concrete placement process.
Joe Nasvik
March 14, 2017