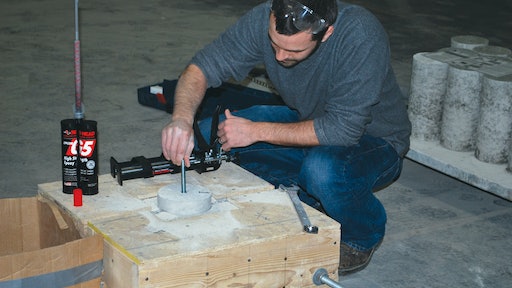 In the summer of 2006, a portion of the concrete ceiling of the Central Artery / Tunnel Project in Boston, Mass., also known unofficially as the "Big Dig," collapsed, killing a motorist and injuring another. The National Transportation Safety Board (NTSB) released its accident report soon after and made recommendations to several parties, including the American Concrete Institute. The recommendation to ACI was to use its "building codes, forums, educational materials, and publications to inform design and construction agencies of the potential for gradual deformation in anchor adhesives under sustained tensile-load applications."

"As part of the process of adopting the design procedures into the ACI 318 Building Code, it became clear to the ACI 318 Code Committee members that a certification program was imperative for successful installation of these anchors under certain conditions," explained Neal Anderson, CRSI Vice President of Engineering. "This connection type should be thought of as being similar to a structural weld, in that an adhesive anchorage is usually a key load carrying connection in a structure. As such, proper training and certification is crucial for its proper installation."

As part of the overall response to the recommendations of the NTSB, ACI has partnered with the Concrete Reinforcing Steel Institute (CRSI) to develop a certification program for Adhesive Anchor Installers. Additionally, Adhesive Anchor Installer Certification is a new requirement in ACI 318-11, Building Code Requirements for Structural Concrete, for anchorages in sustained tension loading conditions and installation orientations from horizontal to vertically upward (overhead). ACI 318-11 was recently released.

The certification program for adhesive anchors was fast-tracked with the aid of a certification development consultant, which worked with ACI Committee 601A - Adhesive Anchor Installer. ACI and CRSI assembled a group of Subject Matter Experts (SMEs) familiar with adhesive anchors, who identified the criteria candidates must meet for certification as ACI/CRSI Adhesive Anchor Installers. Candidates are required to be able to read, comprehend and execute instructions to properly install adhesive anchors, which are typically provided by adhesive anchor manufacturers. In addition, candidates must possess the knowledge to properly assess ambient conditions and the condition of the concrete; be familiar with materials, equipment and tools for installing adhesive anchors; and determine when it is appropriate to proceed with an installation or when additional guidance from a supervisor/foreman/project engineer is needed.

"There are many different variables to consider when installing adhesive anchors," said John W. Nehasil, Managing Director of Certification Programs at ACI. "From understanding jobsite conditions and manufacturers' instructions to recognizing time limits of the adhesive and proper selection and assembly of equipment, installing adhesive anchors properly involves awareness of the variables and skill in executing instructions. The ACI/CRSI Adhesive Anchor Installer Certification program is designed to verify that candidates possess these qualities."

To satisfy the new ACI 318-11 certification requirements, the following components of the ACI / CRSI certification program were developed by ACI Committee 601-A and its main oversight body, ACI CPC - Certification Program Committee:

The performance examination required creation of a generic MPII, representing the combined content of typical MPIIs from the various anchor manufacturers. In working with the Concrete Anchor Manufacturers Association (CAMA), a generic set of installation instructions was developed for use the performance portion of the certification program.

At the present time, the ACI/CRSI Adhesive Anchor Installer Certification program is going to market in specific geographical areas. Typically, ACI Certification programs are sponsored and conducted by Local Sponsoring Groups (LSGs), which include ACI chapters and other concrete-related businesses and associations around the world. To date, more than 30 LSGs have signed on to prepare and eventually conduct this certification program. Presently, the following groups have undergone the LSG orientation class and are currently positioned to offer the Adhesive Anchor Installer Certification program: ACI Illinois Chapter, ACI Eastern Pennsylvania & Delaware Chapter, and the ACI San Diego International Chapter. Other LSGs are in the process of being oriented into the program mechanics. The phase-in period is expected to be commensurate with the adoption of ACI 318-11 into revised editions of local building codes and/or incorporation of the requirements into project construction documents by licensed design professionals.

Interested parties may receive additional information on the Adhesive Anchor Installer Certification program by visiting www.ACICertification.com or by calling 248-848-3800. A directory of ACI Local Sponsoring Groups that conduct certification testing can be found by visiting the following website: http://www.concrete.org/CERTIFICATION/CERT_SPON.HTM.

CustomTech, a division of Custom Building Products - A QUIKRETE Company
December 18, 2020
Follow Us