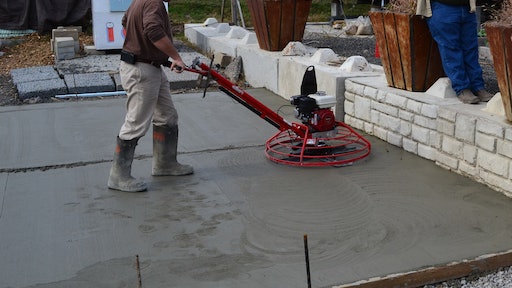 Lythic and MTSU will hold public Day1 trowel aid tests as the 2013 World of Concrete and are looking for contractor volunteers.

"A product that increases contractor productivity without affecting concrete quality is a game changer," says Lythic President David Loe, "and it is worth testing scientifically."

Day1 is applied to the slab in small quantities during troweling, and allows the finisher to close the slab more easily without needing to add water to the surface. Day1 inhibits drying due to heat, wind, or other adverse conditions, and does not weaken the concrete. The current test series may prove that, in fact, Day1 actually strengthens the surface.

The research is being conducted by staff and students of the MTSU's Concrete Industry Management Program. It is a first step toward being able to quantify the effectiveness of troweling aids. "Power troweling aids have yet to be defined by ASTM or ACI," explains Loe. "There is currently no quantitative test method to assess a product's claim to effectiveness during power troweling, making this test something of a trail-blazing effort." The first phase of testing proved to be a validation for Lythic's Day1.

"The research team placed a large slab, and divided it into separate work areas," Loe elaborates. "An experienced concrete contractor finished the surface using a walk-behind power trowel, working under three different conditions." One protocol required finishing without any troweling aid or additional water. The second condition allowed water to be added whenever the finisher wanted it during power-troweling. The third condition allowed Day1 to be added, but not water.

Researchers monitored the power trowel's engine RPM and blade setting, and the operator's comments describing resistance. The most significant measure was the ability to finish the slab properly. To evaluate the effect of the troweling aid on concrete's performance, researchers will also examine cores and conduct durability tests after the slab has cured the required 28 days.

Contractors commonly spray water onto wet concrete during finishing (sometimes called "blessing the slab") to draw up the "cream" that helps close up the surface and create a smooth finish. They may also use water to try to "buy time" if the surface is setting too quickly. However, adding water changes the chemical balance at the surface, weakening it and causing dusting and other problems.

Based on eco-friendly colloidal silica, Day1 is a liquid that is sprayed in small quantities onto the concrete during finishing. Day1 chemically reacts with the concrete to close the pore structure, which slows evaporation. It also lubricates troweling: when Day1 was sprayed on during the MTSU test, the power-trowel could be heard speeding up. Day1 reduces operator fatigue, and wear-and-tear on the equipment.

In prior field tests, Day1 was subjectively observed to extend finishing time anywhere from 15 up to 45 minutes. In conditions of wind, low humidity, or heat, that can make the difference between finishing successfully and "losing the slab." Contractors field-testing it said it strengthens the surface, eliminates dusting, and helps prevent checking and crazing. They described Day1 as, "like having an extra finisher on the jobsite."

In the MTSU test, all areas were power-troweled four times. The concrete with no troweling aid or additional water was finished first, but even so, it set prematurely and could not be finished properly. The surface tore, burned and blistered.

Where water was added, the surface was able to be finished, but burned and had a few blisters.

The concrete with Day1 was finished last, yet it came out the best, and the finisher believed he could even have worked on it longer if he had needed to. He commented that there was very little resistance, and the concrete was still workable. He was also able to use the power trowel with a lower pitch. All holes and low spots filled easily. He noted that there was no tearing of the fine aggregates, so the slab was easier to get on earlier and stay later without issues. The finisher believed he could have troweled the Day1 sections only three times instead of four, with the same results. He also felt he could have waited longer before final finish if he wished, but that was unnecessary.

The MTSU test demonstrated that Day1 reduces the friction between power trowel blade and the fresh concrete mix. Researchers monitoring the power-trowel engine's RPM's recorded faster rotation at lower engine speeds on the areas with the power trowel aid.

"This is compelling evidence that Day1 reduces resistance during troweling, and most important, gives a concrete finisher more troweling time, even under adverse conditions where he might otherwise 'lose' the slab," states Loe. "It is the first time that the effectiveness of a troweling aid has been demonstrated under controlled conditions, and I believe that's an important step for the industry."

Based on this initial effort, researchers are working on criteria that may lead to ASTM-like procedure that will enable contractors to assess a power-troweling aid's effectiveness. The procedure will not only include job site productivity measurements, but quality tests on the hardened concrete surface.

MTSU researchers have scheduled additional contractor-focused tests to be done publicly at the World of Concrete in February, 2013. Contractors will be asked to participate by finishing sections of freshly placed concrete in the Gold Lot of the Las Vegas Convention Center. "We want to monitor the reaction of at least 20 experienced concrete finishers, to develop our model test procedure for power trowel aids," says Dr. Heather Brown, MTSU's lead researcher.

Contractors are invited to sign up to participate in this effort. To reserve a testing spot, email powertrowleingaid@hanleywood.com. There are a limited number of openings available.

Loe also explains that Day1 is more than a troweling aid. Part of the family of Lythic colloidal-silica based concrete treatments, its use during finishing has been proven to result in a better slab. Third-party laboratory tests with Day1 have shown that it meets the water-retention requirements of a liquid membrane-forming curing compound (per ASTM C156 Standard Test Method for Water Loss (from a Mortar Specimen) Through Liquid Membrane-Forming Curing Compounds for Concrete. "It gives the performance of a membrane forming curing compound, even though there is no membrane, film or residue left over to remove," Loe points out. "Day1 becomes a permanent part of the slab that strengthens the surface, and closes the surface sufficiently that the concrete becomes water repellant." Day1 has also been third-party tested to mitigate potential for ASR popouts.