A Ready-Mix Concrete plant in the Midwestern United States has resolved material build-up issues in three storage silos where accumulation had slowed production and increased internal pressures, eventually damaging the vessel walls and forcing a shutdown. 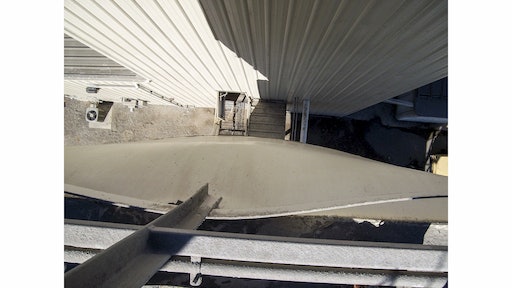 The severity of the material build-up became apparent to system operators when they noticed the walls of the silos starting to bulge outward from over-pressurization.

A Ready-Mix Concrete plant in the Midwestern United States has resolved material build-up issues in three storage silos where accumulation had slowed production and increased internal pressures, eventually damaging the vessel walls and forcing a shutdown. By enlisting the services of a professional silo-cleaning crew from Martin Engineering (Neponset, IL), the Commercial Acres RMC facility owned by Stark Excavating was able to have all three silos safely emptied and ready for repair in just ten working hours, without confined space entry.

“Over time, material dust in the three pneumatically-loaded silos gradually built up, first on walls and ridges and eventually clinging to all the interior surfaces,” explained Concrete Production Manager Jeff Jackson. “As a result, the air flow became constricted, raising the pressure within the silos and exerting greater force on the structure, connections and piping.”

The compacted build-up continued to collect particles, effectively shrinking the internal space as the pneumatic blower forced more material through the silos. The severity of the problem became apparent to system operators when they noticed the walls of the silos actually starting to bulge outward. During a shutdown and inspection, the staff could observe interior damage and decided that over-pressurization had compromised the structural integrity of the three storage vessels.

The need for repairs was clear and immediate, but the material build-up presented a serious obstacle. Remembering a recent article on silo cleaning authored by Martin Engineering that he had seen in a trade publication, Jackson contacted the company about the problem. Already familiar with Martin from using its conveyor belt cleaners and other components, he briefly explained the problem and the urgency of a resolution. Stark received a phone response the same day, and a Martin Engineering Field Supervisor scheduled a site visit for Saturday, during which he visually assessed the situation.

Whipped into shape
A two-man crew arrived on Monday morning to begin work. It was determined that the best approach was to employ the Martin Heavy Duty Whip, one of several technologies that make up the company’s Silo Solutions product line.

The Martin Heavy Duty Whip is a portable, remote-controlled tool that can be lowered into storage containers through a manhole opening. Powered by compressed air, the patented motor can use a variety of different flails and cutting edges to knock down accumulated material without damaging storage vessels. Abrasion-resistant steel chain is best suited for most applications, with non-sparking brass chain for combustible materials. Urethane flails can also be employed to protect lined vessels that could be susceptible to damage from metal tools.

Martin’s top-access cleaning technology eliminates the need to send a man inside a storage vessel and risk potential injury. The equipment is set up outside the silo, and it’s portable enough to maneuver around various bin sizes and shapes. The modular boom of the Whip extends up to 28 feet (8.5 meters) and can clean vessels up to 60 feet across (18 meters) from a central opening of just 18 inches (450 mm) in diameter. Air hose is protected with double wire braid, and the pneumatic motor delivers powerful cleaning action from the rotating head to remove buildup.

“Part of the success of the Whip is its straightforward, air-driven design,” observed Martin Engineering Silo Supervisor Gregg Pickering. “Competing systems that run on hydraulics tend to be heavy and cumbersome. They also present the possibility of a fluid leak, which could damage otherwise-salvageable material,” he said. “The pneumatic whip needs just 100 CFM at 90 psi, which can usually be supplied from a plant’s existing compressed air system. If compressed air isn’t available, a portable compressor can be brought to the site.”

Problem solved
The technicians secured the equipment over an access hatch at the top of each vessel at Commercial Acres. Though all Martin silo cleaning crews are OSHA and MSHA certified for confined space entry, they instead used remote control from outside the bin to safely guide the cleaning head. The two-man crew lowered the whip through an opening in the blockage, starting at the bottom and undercutting the material as they worked their way up. In most cases, the technique allows material to be recaptured and returned to the material stream, and Stark was able to salvage the entire 40 tons of cementitious product removed from the silos.

The entire process required just a one-day outage for the service. The silo restoration will include removing all internal horizontal supports, pulling all sidewalls back to their original flat position, then replacing the horizontal bracing and adding further dimensional support.

Exit feedback from Stark management was a clear indication of the company’s satisfaction with Martin Silo Services, which helped the facility quickly resolve a difficult issue and prepare for the required repairs as soon as possible. The report showed work was completed in a safe and timely manner, precisely on the predicted schedule.