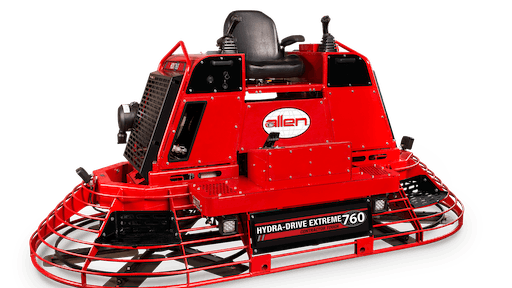 Allen a manufacturer of site prep and concrete finishing equipment, announces the debut of their new HDX760 Riding Trowel. The HDX760 is a state-of-the-art, hydraulically controlled ride-on power trowel that incorporates “Intelli-Power” to ensure peak performance, component safety and extended life. The built-in “Intelli-Power” system controls both the hydraulics and the engine operation. With “Intelli-Power” the 74 hp T4F Hatz diesel engine and the Bosch-Rexroth hydraulic components actually talk to each other to ensure maximum performance and safety at all times. This results not only in performance unequaled by competitors and safety protection for these very critical engine and hydraulic components, but also much longer operating life expectancy.

The “Itelli-Power” system is a combination of the Bosch-Rexroth hydraulic control unit (HCU) and the Hatz engine control unit (ECU). The HCU communicates with all of the pumps, motors, and valves to ensure maximum performance and safety. It also monitors the hydraulic filter to warn when the filter is clogged, and monitors the hydraulic temperatures to prevent component damage. The ECU works with the HCU to maintain maximum efficiency and precise rotor speed. It is able to sense the engine load and adjust the rpms to prevent the engine from bogging down, and all the while keeping effective rotor speeds on the concrete.

Technology is changing our options when it comes to deciding whether to repair or replace damaged, cracked concrete.
Rod Dickens
May 18, 2012
Follow Us