Since the first generation of Conquest 100 GPR was unveiled in 2001, Conquest100 has been helping contractors locate embedded objects in concrete. 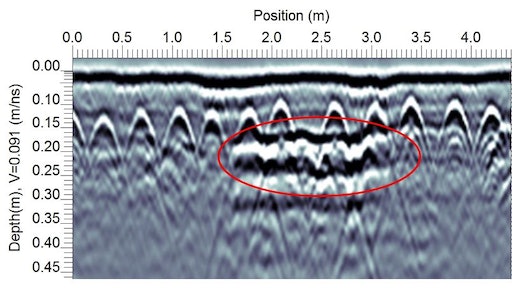 Figure 1: GPR line on slab-on-grade concrete floor reveals a void. The strong contrast between the concrete and air-filled void produces a strong reflection at the bottom of the slab.
Sensors & Software Inc.

Since the first generation of Conquest 100 GPR was unveiled in 2001, Conquest100 has been helping contractors locate embedded objects in concrete. In most cases, professionals are looking for rebar, conduits and post-tension cables to avoid them when cutting or coring concrete. In other scenarios, locating the position, amount and cover depth of rebar is essential for structural analysis. But there are other applications for Conquest 100. The examples below show how Conquest100 is used to locate voids under a concrete slab, corrosion of rebar and to aid in forensic investigations.

GPR waves reflect off changes in the dielectric properties of materials, the strength of the reflection being determined by the difference in these properties. When scanning concrete, GPR waves reflect whenever they encounter embedded objects, such as a metal rebar, plastic conduit or even the bottom of a slab. In a slab-ongrade situation, GPR can also be used to locate voids that sometimes form beneath the concrete. Voids under concrete produce a strong reflection, due to the large contrast between the properties of the concrete and the air or water filled void underneath. Knowing the location of voids is essential, so that they can be injected with grout before they become too big and either the concrete cracks or collapses in that area.

In this example, an engineering company was called into a large factory to investigate locations where the floor was cracking. They decided to use GPR to scan the problem areas. Several line scans were run initially to gain an understanding of how the floor was constructed (Figure 1).

The concrete had rebar, which are shown as hyperbolas near the top of the image. The interesting part was the strong area of reflection observed below the rebar, between horizontal positions 1.5m and 3.0m. Following the line scan, two large Conquest100 grids were collected, each measuring 2.4m x 2.4m, to obtain the areal extent of the voids. The grids were subsequently combined in EKKO_Project to create an area covering 2.4m x 4.8m. The depth slices generated confirmed what was seen in the line scan by revealing some anomalies at approximately the 15cm depth mark (Figure 2). These anomalies are shown in red and correspond to areas of higher reflection strength.

These anomalous areas were then drilled and verified to be voids. They were injected with grout to stabilize the slab.

Finding deteriorated concrete relies on the fact that GPR waves are attenuated and scattered by an area of concrete that is deteriorated. For example, intact steel rebar reflects more energy than corroded rebar. Users are trained to look for areas that return a weaker signal as an indicator of deterioration. A deteriorated zone can be caused by water infiltration (even if the corrosion process has not started) or rebar corrosion itself. Most infrastructure deterioration assessments are done on bridge decks; many GPR transects are collected and rebar reflection amplitudes are analyzed. Using Conquest100, Line Scans up to 50 meters (150 feet) in length can be collected, and the user can look for anomalous areas in the data. In this example, Conquest®100 was used to collect a 20’ line on a section of a concrete bridge deck, with no asphalt overlay (Figure 3).

The rebar reflections between the horizontal position of 8’ and 15’ show a weaker response compared to the surrounding area. It is important to note that one cannot definitively say that those rebars are corroded. Rather, there is an anomalous area that could be caused by water ingress, a repaired area, or corrosion. Either way, it warrants further investigation.

Based on the methodology and processing outlined in ASTM D6087 – Standard Test Method for Evaluating Asphalt-Covered Concrete Bridge Decks Using Ground Penetrating Radar, combining the rebar responses from many lines collected on a bridge deck generates a map showing areas of deterioration (Figure 4).

Every so often, Conquest 100 is used for a sensational application! In Colombia, it was believed the drug lord, Pablo Escobar, had hidden millions of dollars throughout his various properties.

Two former CIA case officers are now attempting to locate Pablo’s hidden millions. This exciting project was the subject of a documentary series entitled “Finding Escobar’s Millions”, which aired on the Discovery Channel in the US. The investigators enlisted the services of a Calgary-based geophysical consulting company to provide hightech tools to aid in the search. One of the tools used was Sensors & Software’s Conquest PCD Enhanced GPR system. At various times, the Conquest 100 was used to image suspect areas to determine if there could be a hidden treasure. The Conquest 100 successfully identified the locations of safes, clearly delineating box-shaped areas for further investigation (Figure 5). In one episode, a 2’x8’ grid was collected, and a noticeable rectangular structure was observed; the investigators were very excited to see what was contained inside this suspect structure. To find out what they discovered, and see how Conquest 100 was used, tune into the Discovery Channel for full episodes.

In the above cases, a Conquest 100 GPR has been employed to locate features or objects that would otherwise be indiscoverable. These examples show the applications for Conquest 100 are well beyond simply detecting rebar and conduits. The simplicity and ease-fouse of the Conquest 100 system allow for the quick adoption of GPR technology in varied applications.

Sensors & Software is a manufacturer of Ground Penetrating Radar equipment, delivering subsurface imaging solutions to a variety of customers and industries worldwide. For more information about our products and applications, please visit www.sensoft.ca.