MAPEI recently renewed its relationship with the Solomon R. Guggenheim Foundation through a contribution to the retrospective Alberto Burri: The Trauma of Painting. 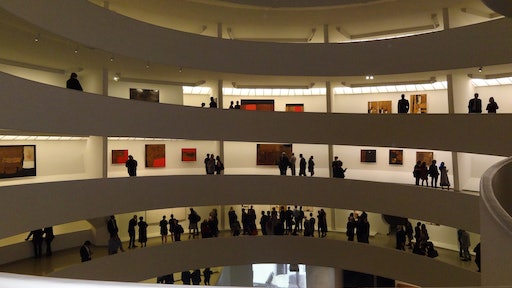 Burri, who became famous for the particular technique of collage and assemblage that he adopted in the realization of his works, used Vinavil polyvinyl acetate (PVA) as an adhesive (as shown in a large painting located in the station of Santa Maria Novella in Florence), as well as a glossy surface finish. For this reason, MAPEI Group and its subsidiary Vinavil USA chose to support the Guggenheim in its exhibition of Burri’s works. This is the most comprehensive Burri exhibition in the United States in nearly 40 years.

“We are very proud to have had a role in the conservation and display of Alberto Burri’s artwork,” said Hemant Shah, Director of Vinavil USA. “We greatly admire the work of the Guggenheim’s guest curator, Emily Braun, in bringing together Burri’s works from the many generous people and organizations who loaned their paintings for the exhibit.” Vinavil representatives attended the sponsors’ dinner and preview on October 7 and hosted guests at the gala reception for the grand opening on October 8.

The project once again strengthens the link between the MAPEI Group and the Guggenheim Foundation that has developed over time – both through the role that the company played in the restoration of two important Guggenheim museums (New York and Venice) and through the support of cultural activities, confirming MAPEI’s great commitment to art and culture. “The opportunity to be a part of the restoration of the building in New York as well as to support an exhibition that represents Italy’s artistic heritage in the modernist period plays to both our strengths,” said Luigi Di Geso, President and CEO of MAPEI Americas. “Alberto Burri’s use of Vinavil products as an integral part of his paintings deepens the bond between the artist, the museum and MAPEI.”

The relationship was initiated in 2008 with the restoration of the Solomon R. Guggenheim Museum in New York. The Frank Lloyd Wright-designed building, whose exterior had been subject to degradation from atmospheric agents, presented many cracks. The concrete surface was restored through the use of MAPEI products, which took into account the need to maintain a certain elasticity of the building surface while preventing the formation of new cracks.

In 2008 Mapei joined the Intrapresæ Collezione Guggenheim of the Peggy Guggenheim Collection in Venice. This premier and renowned Italian program in support of a private museum involves the most important national and international companies. Sponsors include companies that share a passion for art and believe in investing in support of culture, as reflected by their attention to cultural projects and social responsibility. “This is a valuable and culturally rich initiative,” commented Dr. Giorgio Squinzi, CEO of the MAPEI Group.

In 2009, MAPEI was involved in the restoration of Palazzo Venier de Leoni, which houses the Peggy Guggenheim Collection in Venice. MAPEI provided products free of charge for the renovation of the facades overlooking the Grand Canal and the Rio Torreselle, where the entrance to the museum is located.

In 2012, MAPEI also sponsored the exhibition Cycling, Cubo-Futurism and the Fourth Dimension: Jean Metzinger's “At the Cycle-Race Track”, organized by the Peggy Guggenheim Collection to pay tribute to the winner of the 1912 Paris-Roubaix cycling race – a race to which MAPEI is particularly connected.

In 2014, the company contributed as technical sponsor of the exhibition Themes and Variations: The Empire of Light, a curatorial formula devised in 2002 by Luca Massimo Barbero for the art works and the spaces of the Peggy Guggenheim; the exhibition was held from February 1 to April 14 at the Palazzo Venier de Leoni. Later that year, MAPEI contributed to the renovation of the Museum Café, providing products for painting the walls of the dining facility.

MAPEI has always supported the conservation of the world’s artistic heritage. The company has contributed its products and technology so that the great places of Italian and international culture are restored. In addition, MAPEI contributes to the spread of artistic culture that has always been part of the company’s corporate philosophy.

Cintec first started work on the west block in 1994 when Cintec reinforcement anchors were installed in the south west tower by Public Works based at Plouffe Park Ottawa. Since then, the West Block has been fully restored and modernized.
Cintec America
March 12, 2019

Designed to fill and repair saw-cut contraction and construction joints in industrial concrete floors in settings such as distribution centers, warehouses and manufacturing facilities.
Metzger/McGuire
January 30, 2019

Resurfacer to the Rescue