Scientists have found the mix of volcanic ash, lime, seawater and lumps of volcanic rock interact to create new minerals which reinforced the concrete over time 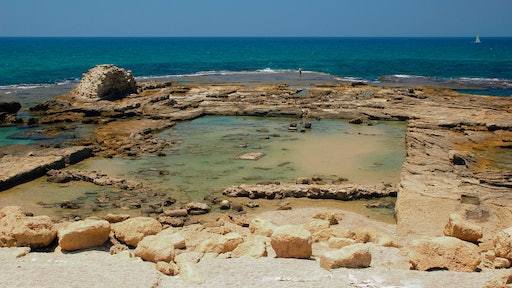 Caesarea is the earliest known example to have used underwater Roman concrete technology on such a large scale.
James Cocks (CC BY-SA 3.0)

Researchers believe they have uncovered the secrets to what made Roman concrete survive thousands of years. In fact, according to reports from the Guardian, the ancient material actually became stronger over time. Scientists have found the mix of volcanic ash, lime, seawater and lumps of volcanic rock interact to create new minerals which reinforced the concrete over time.

According to Geologists Marie Jackson who co-authored a study on these recent findings, scientists used electron microscopes and other cutting edge tools and technologies to zoom into the concrete, "map the minerals present, the succession of the crystals that occur, and their crystallographic properties."

Researchers realized the unexpected materials found in the ancient concrete weren't added but instead a result of a chemical reaction that created them in place. When components in the mix dissolved, interacted and changed, the new materials were left to crystallize in the gaps over the centuries.