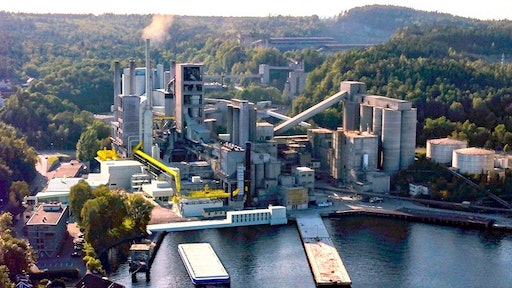 Brevik could become the world’s first large-scale carbon capture plant of the cement industry, with 400,000 tonnes of CO2 captured annually and transported for permanent storage.
HeidelbergCement

HeidelbergCement's Norcem plant in Brevik, Norway, has had its investment approved by the Norwegian parliament for a full-scale carbon capture facility. The carbon capture and storage (CCS) project looks to capture 400,000 tons of carbon dioxide per year, including permanent storage - marking it the "first industrial-scale CCS project at a cement production plant in the world."

The company looks to begin construction of the facility as soon as possible with the goal of starting the collection process in three years' time (by 2024) - a 50% cut of emissions. This follows the earlier announcement of the HeidelbergCement receiving an A rating on the CDP Climate Change A List, the second year in a row for the company.

The company produced a video walking you through the vision.

“We are delighted about the final approval of the Norwegian parliament for our breakthrough CCS project in Norway,” says Dr Dominik von Achten, Chairman of the Managing Board of HeidelbergCement. ”To meet national and international climate targets, CO2 separation is an important cornerstone. Our CCS project in Brevik will pave the way for our industry and other sectors.”

Giv Brantenberg, General Manager HeidelbergCement Northern Europe and Chairman of the Board of Norcem says: “HeidelbergCement highly appreciates the successful cooperation with the Norwegian authorities. The Brevik CCS project clearly shows the importance of industry and public sector to find common solutions in the fight against climate change.”

The Norwegian government had shortlisted Brevik for an industrial-scale CO2 capture trial at the beginning of 2018. In September 2019, a memorandum of understanding on the capture and storage of CO2 was signed by HeidelbergCement and the state-owned Norwegian energy Group Equinor. The project funding is largely supported by the Norwegian government as part of the Norwegian full-scale ‘Longship’ climate investment project that comprises capture, transport and storage of CO₂. HeidelbergCement has committed itself to reduce its specific net CO2 emissions per tonne of cementitious material by 30% compared to 1990 by 2025. This figure had previously only been targeted for 2030. To achieve this, the company has defined concrete CO2 reduction measures for all plants worldwide. HeidelbergCement aims to offer carbon-neutral concrete by 2050 at the latest.