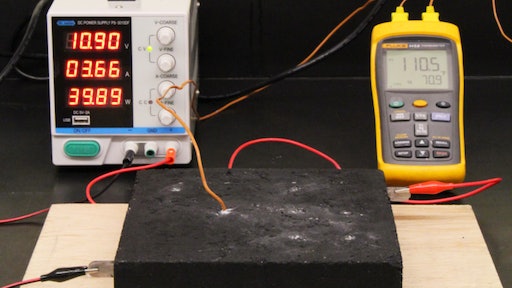 By running current through this mortar sample made with nanocarbon-doped cement, Chanut and Soliman were able to warm it to 115 F (see thermometer display on the right).
Andrew Logan / MIT News

MIT News is reporting that a partnership between the MIT Concrete Sustainability Hub and the French National Center for Scientific Research (CNRS) has resulted in the development of cement with electron conductivity. The research goal was to create a more sustainable concrete and find new uses for the material. Electron conductivity, created by adding nanocarbon black at 4% volume to mixtures, allows cement and concrete to be used in new applications.

A voltage as low as 5 volts increased the surface temperature of their samples (roughly 5 cm3 in size) up to 100 degrees Fahrenheit. 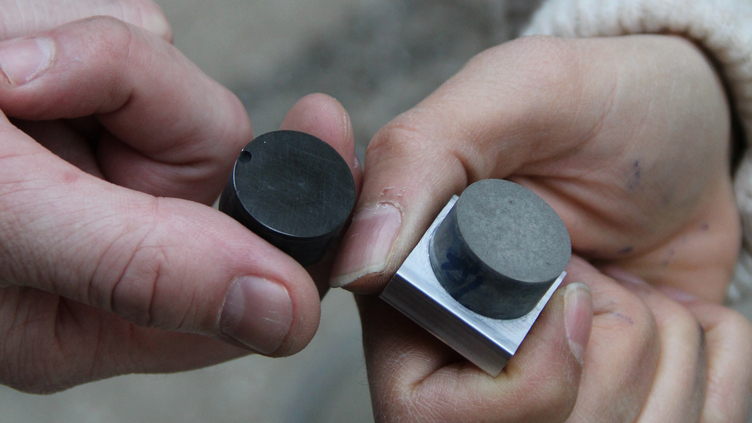 New Uses for Cement and Concrete

“This technology could be ideal for radiant indoor floor heating,” says Nicolas Chanut, a co-author on the related research paper and a postdoc at MIT CSHub. “Usually, indoor radiant heating is done by circulating heated water in pipes that run below the floor. But this system can be challenging to construct and maintain. When the cement itself becomes a heating element, however, the heating system becomes simpler to install and more reliable. Additionally, the cement offers more homogenous heat distribution due to the very good dispersion of the nanoparticles in the material.”

Not only could the self-heating concrete be used in radiant indoor floor heating, it could be used in concrete pavements, which are vulnerable to damage from de-icing salts.

“In North America, we see lots of snow. To remove this snow from our roads requires the use of de-icing salts, which can damage the concrete, and contaminate groundwater,” notes Soliman. The heavy-duty trucks used to salt roads are also both heavy emitters and expensive to run.

According to the press release:

By enabling radiant heating in pavements, nanocarbon cement could be used to de-ice pavements without road salt, potentially saving millions of dollars in repair and operations costs while remedying safety and environmental concerns. In certain applications where maintaining exceptional pavement conditions is paramount — such as airport runways — this technology could prove particularly advantageous. 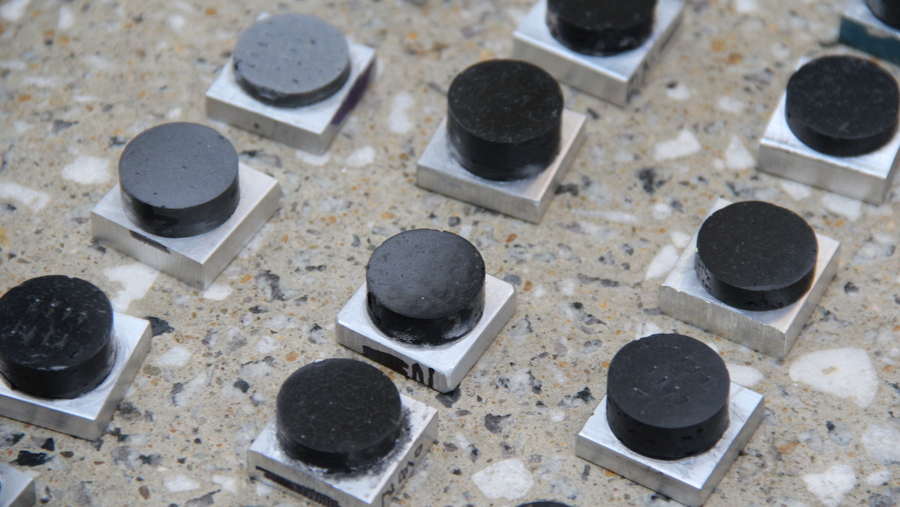 Researchers tested the mechanical properties of their samples by using scratch tests. The results of the testing can be seen on the surfaces of the samples.Andrew Logan / MIT News

Achieving multifunctionality posed a variety of technical challenges. For instance, without a way to align the nanoparticles into a functioning circuit — known as the volumetric wiring — within the cement, their conductivity would be impossible to exploit. To ensure an ideal volumetric wiring, researchers investigated a property known as tortuosity.

“Tortuosity is a concept we introduced by analogy from the field of diffusion,” says Franz-Josef Ulm, a leader and co-author on the paper, a professor in the MIT Department of Civil and Environmental Engineering, and the faculty advisor at CSHub. “In the past, it has described how ions flow. In this work, we use it to describe the flow of electrons through the volumetric wire.”

Ulm explains tortuosity with the example of a car traveling between two points in a city. While the distance between those two points as the crow flies might be 2 miles, the actual distance driven could be greater due to the circuity of the streets.

The same is true for the electrons traveling through cement. The path they must take within the sample is always longer than the length of the sample itself. The degree to which that path is longer is the tortuosity.

Achieving the optimal tortuosity means balancing the quantity and dispersion of carbon. If the carbon is too heavily dispersed, the volumetric wiring will become sparse, leading to high tortuosity. Similarly, without enough carbon in the sample, the tortuosity will be too great to form a direct, efficient wiring with high conductivity.

Even adding large amounts of carbon could prove counterproductive. At a certain point conductivity will cease to improve and, in theory, would only increase costs if implemented at scale. As a result of these intricacies, they sought to optimize their mixes.

“We found that by fine-tuning the volume of carbon we can reach a tortuosity value of 2,” says Ulm. “This means the path the electrons take is only twice the length of the sample.”

Quantifying such properties was vital to Ulm and his colleagues. The goal of their recent paper was not just to prove that multifunctional cement was possible, but that it was also viable for mass production.

“The key point is that in order for an engineer to pick up things, they need a quantitative model,” explains Ulm. “Before you mix materials together, you want to be able to expect certain repeatable properties. That’s exactly what this paper outlines; it separates what is due to boundary conditions — [extraneous] environmental conditions — from really what is due to the fundamental mechanisms within the material.”

By isolating and quantifying these mechanisms, Soliman, Chanut, and Ulm hope to provide engineers with exactly what they need to implement multifunctional cement on a broader scale. The path they’ve charted is a promising one — and, thanks to their work, shouldn’t prove too tortuous.

The research was supported through the Concrete Sustainability Hub by the Portland Cement Association and the Ready Mixed Concrete Research and Education Foundation.