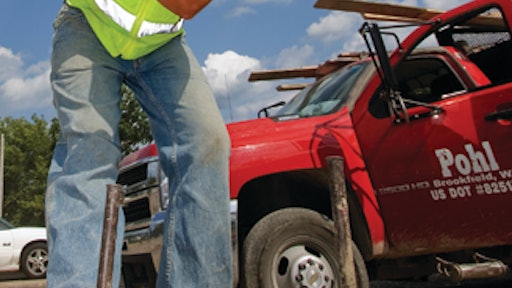 The Women in Concrete Alliance (WICA) — a networking organization for women in the concrete industry — has announced the winner of their second Woman of Distinction award.

Kilah Engelke, apprenticeship coordinator for Milwaukee OPCMIA Local 599, was voted the winner of the award for her dedication to her craft and her commitment to her crew. She has been a concrete finisher with the Operative Plasterers' and Cement Masons' International Association for the past 11 years. "Winning this award is truly an honor for me, as it is proof that hard work and determination does not go unrecognized," said Engelke.

Prior to completing her apprenticeship as a finisher, Engelke also spent three years as a laborer on a slipform concrete paving crew, which is where she began her career in concrete.

"For well over a decade, I have literally shed blood, sweat, and even sometimes tears in my ongoing quest to gain and maintain the respect of my crew and to be successful in this nontraditional position," said Engelke. "Part of the beauty of the construction industry is that a little heart goes a long way, and I am so thankful that I have had the chance to prove myself and what's in my heart through my passion for concrete."

In her nomination, it was noted that, as a woman in a predominantly male industry, Engelke exemplifies what it means to work and succeed in construction and that quality is proven by her day-to-day commitment to her crew and to her trade. She is highly respected by the people she works with and for, as she has worked very hard to be a valuable and important part of her crew.

In October 2011, Engelke was hired as the first ever apprenticeship coordinator for the Milwaukee OPCMIA Local 599. Her passion for concrete and for her job was recognized as a needed catalyst for the future success of the growing and respected program.

"I look forward to continuing to share my love for my work through my position as apprenticeship coordinator in Milwaukee," said Engelke. "I am truly excited for the challenge I have ahead of me now to uphold the title of Woman of Distinction in Concrete 2012, and to continue to prove that women can succeed in the world of concrete."

Last year's winner was Rosa Olivia Becerra, owner/president of Cortamex, a diamond blade supplier in Tijuana, Mexico. Becerra was present at the Women in Concrete luncheon to greet women with questions on doing business in Mexico.

According to Kari Moosmann, co-founder of WICA, the Award was created to celebrate women in the industry.

"It was so encouraging to see how involved the women were with choosing the recipient of the award," said Moosmann. "This award really means a lot to the women who voted and the nominees. I believe it will help reinforce that women are a valued resource in the concrete construction industry."

"Kilah Engelke embodies the true meaning of this award and WICA – forging the way so other women will have opportunities and sharing the experiences to make a better marketplace for us all," said Kayler. "The Woman of Distinction award gives us a chance to celebrate heroes such as Engelke."

To submit a nomination for next year's Woman of Distinction award, visit the News/Events page at www.womeninconcrete.org. Voting will occur at the 2013 Women in Concrete Luncheon.