NRMCA Honors Tom Harris for His Work in Operations, Environment and Safety Activities

Beginning in the 1980s, Harris was an integral part of the invention and introduction of extended axle mixer trucks 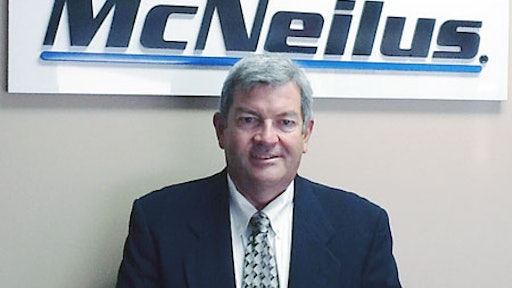 The Operations, Environmental & Safety Committee (OES) of the National Ready Mixed Concrete Association (NRMCA) has named Tom Harris, director of materials at McNeilus Truck and Manufacturing, Inc., its 2013 Joseph E. Carpenter Award recipient. The award is named in honor of Joseph E. Carpenter of Rinker Materials, West Palm Beach, FL, who was instrumental in the formation and early operation of the NRMCA Committee on Maintenance. The award was instituted in 1988 and is presented annually to persons who have demonstrated outstanding lifetime contribution to the ready mixed concrete industry in the fields of operations, environmental and safety.

Harris (shown at right and in attached file) was honored for his longtime commitment to the OES Committee and the ready mixed concrete industry. He has been one of the industry's foremost authorities on concrete mixer trucks from 1979 to the present. Beginning in the 1980s he was an integral part of the invention and introduction of extended axle mixer trucks. In the 1990s he helped invent the Sliding Mixer System (SMS), a trailer mixer which became highly popular. Then in the early 2000s Harris was a leader bringing the concept of composite drums to the industry. He was also an early advocate for the advancement of CNG power in the ready mixed concrete industry.

Harris has served in many capacities and roles within NRMCA and the Truck Mixer Manufacturers Bureau (TMMB). More than a decade ago he was involved with Middle Tennessee State University when it started the Concrete Industry Management Program. He is a longtime member of the OES Committee and has been one of the leading supporters of the NRMCA Driver of the Year and National Mixer Driver Championship programs.

The award will be presented to Harris in March in San Antonio, TX, during the 2013 NRMCA Annual Convention.