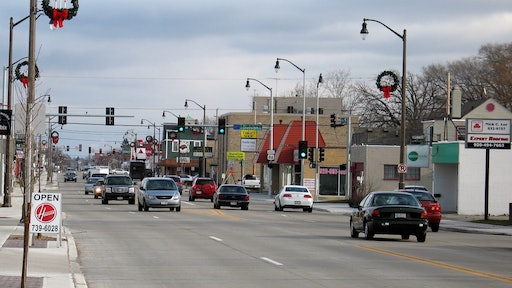 The American Concrete Pavement Association (ACPA) Annual Awards for Excellence in Concrete Pavement are designed to honor quality concrete pavements constructed in the United States and Canada each year. The 2012 winner for Municipal Streets and Intersections greater than 30,000 square yards was the Wisconsin Avenue project in Appleton, Wis.

Owner: The City of Appleton, Wis.

Wisconsin Avenue is a primary east/west urban arterial that carries more than 17,000 vehicles per day through a commercial area in Appleton. The corridor has 28 intersections and more than 140 driveway openings. Unfortunately, it also had a crash rate that was 2.5 times higher than the statewide average.

A $5.7 million dollar construction project took aim at the accident rate, but also accomplished much more for this roadway and the businesses and people it serves.

Formal planning began in 2005. The Wisconsin DOT, City of Appleton and OMNNI Associates met monthly for more than two years with the Wisconsin Avenue Design Committee. Comprised of local business owners in the project area, the committee provided the design team input on roadway design, streetscaping and construction staging.

The meetings resulted in overwhelming support for a project that would improve the look and the functionality of the corridor. The design expanded the roadway to a consistent, four-lane cross section with left turn lane additions and intersection geometric improvements throughout the corridor.

On-street parking was generally eliminated; however, indent parking was designed along a three-block area. The project incorporated a mid-block pedestrian hybrid beacon (HAWK), which was one of the first installations in Wisconsin.

Construction began in late March of 2011. A total of 150 working days were allotted to Vinton Construction to complete the project. Completing the multi-staged project in one construction season required higher than normal production rates and extra efforts that included working weekends and scheduling concurrent controlling operations, while meeting the requirement to maintain local vehicular and pedestrian access to the businesses within the construction zone. To keep the project on schedule, the contractors generally worked 12-hour days during the week and 10-hour days on Saturdays.

To meet the project schedule, the contractor had to start work on the project in the last week of March. An early March spring thaw greatly benefited construction start-up, but the project fell behind schedule when a storm blanketed Appleton with 8 inches of heavy snow in mid-April. Vinton paved the first section of mainline concrete pavement on May 4, just two days behind the original schedule.

The contractor developed a detailed project construction schedule and provided weekly schedule updates that were posted to a project website. Every morning the project engineer posted a daily reminder of work areas and traffic impacts. The website provided a constant flow of information, including a Twitter feed to alert followers when new information was posted.

Creative signs in interesting shapes, and with interesting designs, will catch people’s eyes and help you build brand awareness that will lead to increased job opportunities.
StickerYou
Jul 26th, 2021

MAX TwinTier rebar tying tools have a patented technology that dispenses the precise amount of wire needed to tie a rebar cross section. There is no wire wasted, which leads to lowered production cost.
Jul 1st, 2021

Air quality is not only important for construction workers’ comfort but also for their health. Propane-powered construction equipment can provide a clean, low-emissions operation at the jobsite.
Propane Education & Research Council (PERC)
Jul 2nd, 2021

Discover ways to reduce your environmental footprint and save money.
Jul 1st, 2021
Follow Us