Concrete Grooving Gaining Accceptance as a Method to Preserve Pavement 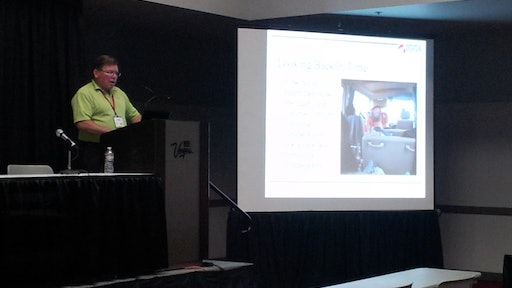 John Roberts, executive director of the IGGA says diamond saw cut patterns can be a means of road rehabilitation that can save municipalities and taxpayers money by extending a pavements useful life.

John Roberts, executive director of the International Grooving and Grinding Association (IGGA) spoke at World of Concrete on Tuesday about the importance of pavement preservation in the years to come.

Roberts spoke of diamond saw cut patterns as a means of road rehabilitation that can save municipalities and taxpayers money by extending a pavements useful life. "It allows for the continued upgrading of our nation's roads despite the weak economic climate," says Roberts.

"NGCS is designed to provide a consistent and predictable surface that is known for having the quietest ride of any concrete surface and provides improved skid resistance," says Roberts.

In California, NGCS has been used on six full scale projects throughout the state. These sections were all existing concrete pavements that averaged over 30 years old. The sections were conventionally diamond ground to improve ride quality in areas where a greater level of noise abatement was desired.

Caltrans has since developed a Quiet Pavement Program (QPP) based on the confidence that six projects provided and now has developed specifications that can be used throughout the state.

The Minnesota Department of Transportation has also tested five segments of NGCS.