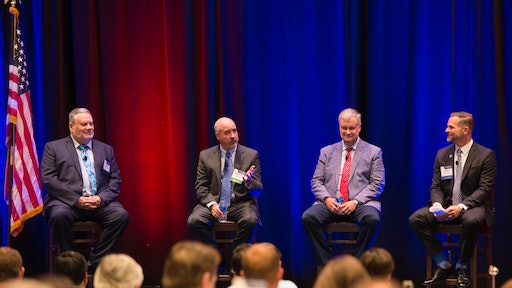 The Texas Aggregate & Concrete Association (TACA) welcomed more than 360 attendees to its 65th annual meeting June 12-14, at the Gaylord Hotel in Grapevine, Texas.

The discussion opened around the topic of transportation/infrastructure, in which NSSGA’s Johnson noted that the upcoming presidential and legislative elections would have a profound effect on the industry.

“If we end up after the 2020 cycle with an all-Democrat line up (presidency, Senate and House),” says Johnson, “we would most likely have a $2 trillion infrastructure bill passed within 90 days. However, it would also present a bit of a paradox because the regulatory landscape would also change dramatically, creating a situation in which we would have to be wary of unreasonable regulations and rules based upon unsound science that would make it more difficult to meet the increased demand for our products.”

PCA’s Ireland notes that is one of the reasons the industry associations are engaging in closer collaboration.

"Whatever happens in the upcoming elections, we will be far more effective in achieving America’s infrastructure needs if we pool our resources," he says, furthering explaining that the PCA is sharing back-office support and other assets with NRMCA, with both associations moving into the same building as the NSSGA headquarters in Washington, DC.

“Together,” says Ireland, “we are a stronger force.”

NRMCA’s Philipps called for allocating more industry resources for promoting the advantages of concrete vertical construction (low- to mid-rise buildings, mainly in the three- to seven-story range). In Texas, for example, Philipps says NRMCA is assigning more resources to vertical construction. He touted the benefits of NRMCA’s Build with Strength program, which advocates for the use of concrete, a material that is durable, affordable and energy-efficient, in addition to having aesthetic properties for both vertical and horizontal construction.

All panelists referred to the superior construction attributes of concrete, including its sustainability and durability in ever more demanding environments, and to the innovative work being done by MIT’s Concrete Sustainability Hub. In fact, Jeremy Gregory, PhD, executive director of the Hub, told TACA members, “Concrete is a low-impact material and the most used building material in the world. It is key to solving many of our infrastructure challenges.”

At the roundtable, Perkins concluded by saying, “We are excited about the growing collaboration among national trade associations to meet the challenges of providing the U.S. with the infrastructure it needs to grow and thrive. That has a profound impact on what we do at the state level. We realize that working together, rather than individually, helps us to achieve a longer-term and more sustainable impact.”