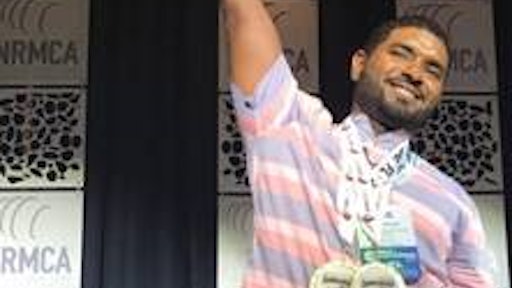 Ready mixed concrete mixer truck driver Luis Martinez from Maschmeyer Concrete of Orlando, FL, earned top honors at the 2019 National Ready Mixed Concrete Association’s (NRMCA) National Mixer Driver Championship. The event was held in October at the Gaylord Palms Resort and Convention Center just outside Orlando in conjunction with NRMCA’s ConcreteWorks 2019. Martinez also earned the champion’s check of $5,000. He has been driving for Maschmeyer Concrete for five years and was the runner-up in the 2017 Florida Concrete & Products Association State Safety & Skills Competition.

This year’s contest “was the largest group of drivers to ever compete” in the 14 years the event has been held, said NRMCA Executive Vice President of Operations and Compliance Gary Mullings. Some 96 drivers, which included state rodeo champions as well as NRMCA Producer member company champions from around the nation, competed to be crowned the “Best of the Best.” Martinez earned champion based on a cumulative score derived from competitions that included a driving challenge course, visual vehicle inspection, reaction-time test, delivery ticket station and 2-hour written examination. Awards were presented for the top five finishers. The Truck Mixer Manufacturers Bureau (TMMB) was the premier sponsor of the event.

Also honored at the driver awards banquet were drivers who distinguished themselves at various stages of the competition.

The popular “Bowling Station” returned to the competition for the seventh year, and seven drivers scored a nine:

Drivers also again competed in the “Chute Hoops” station. An amazing 74 drivers successfully made a basket with a basketball rolling down a moving concrete chute. Finally, taking the top spot on the Driving Challenge Course by outscoring all others was the eventual champion, Luis Martinez from Maschmeyer Concrete.