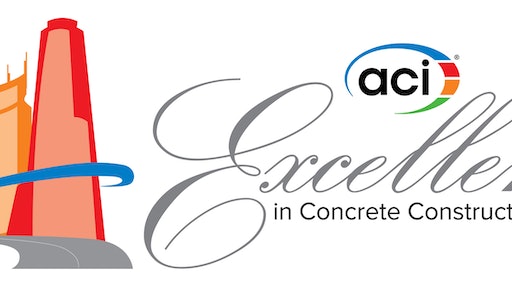 The American Concrete Institute (ACI) announced the winners of the 2019 Excellence in Concrete Construction Awards, who were honored at a Gala event during the Institute’s Concrete Convention & Exposition, Oct. 21, 2019, in Cincinnati, Ohio.

Also known as Ithra, the Arabic word for “enrichment,” the King Abdulaziz Center for World Culture is an 914,930 ft. building surrounded by a 2,368,000 ft Knowledge Park that creates a space to inspire the imagination. Features of the structure include post-tensioned slabs spanning 52 ft, sloped concrete walls and ramps, and twisted and inclined reinforced concrete columns with decorative concrete finish. The building is 295 ft tall and is supported on a 10 ft thick raft foundation. Stability is provided through a reinforced concrete core acting as a propped cantilever. The columns supporting the elevated slabs are inclined and result in horizontal thrust forces at the head and base of each column lift. The post-tensioned slabs act as structural diaphragms to carry these forces back to the core. Construction was completed in the fall of 2017.

The ACI Excellence in Concrete Construction Awards were created to honor the visions of the most creative projects in the concrete industry, while providing a platform to recognize concrete innovation, technology, and excellence across the globe.  To be eligible for participation in the Excellence Awards, projects needed to be winners at a local ACI Chapter level and submitted by that Chapter or chosen by one of ACI’s International Partners.

An independent panel of esteemed industry professionals judged projects and selected winners based on architectural and engineering merit, creativity, innovative construction techniques or solutions, innovative use of materials, ingenuity, sustainability, resilience and functionality.

Additional winning projects were selected from among several possible categories, and included: