Hilti North America saw an 8.6% increase in 2019 compared to the previous year 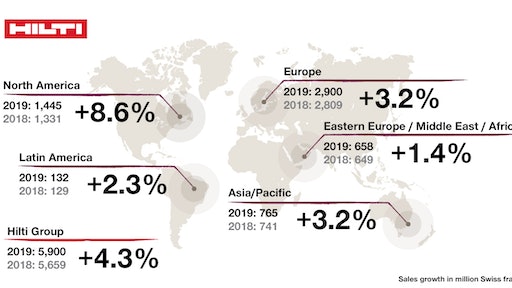 The Hilti Group grew sales by 4.3% in the 2019 business year to 5.9 billion Swiss francs (CHF). In local currencies, growth was 6.3% against the previous year.

“2019 was another successful year for us with exclusively organic growth,” said Christoph Loos, Hilti CEO. “The economic environment has become more volatile while global construction growth has noticeably slowed. Additionally, currencies largely displayed depreciation tendencies against the Swiss franc. Against this background we’re satisfied with our growth level and are pleased that we gained additional market share.”

Martina added, “Major factors in our growth are the focus on new products, services and software which bring added-value to the industry, and our 3,800 team members who are engaging daily with professional customers.”

Hilti achieved an increase of 6.9% in local currencies in the Europe business region, despite Brexit uncertainties and a substantial downturn of the construction economy in Scandinavia. North America continued to develop positively, advancing 7.3%.

Significant growth was also achieved in Latin America (+8.5%), where the recovery in Brazil made a considerable contribution. In the Asia/Pacific region, the growth level of 4.3% was slowed by the difficult environments in both Hong Kong and South Korea.