Shaped by Concrete campaign will feature stories exploring how these construction materials shape the world around us to make our communities, cities and country better. 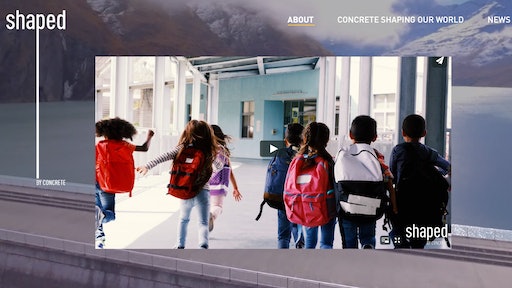 The Portland Cement Association (PCA) is launching Shaped by Concrete, a new educational campaign to increase awareness of the sustainability, resiliency and durability of concrete made with cement. The campaign will feature stories based on these themes, exploring how these construction materials shape the world around us to make our communities, cities and country better.

With impacts from climate change, growing populations and accelerating urbanization creating demand for safe, affordable housing, there has never been a more important time to explain how and why concrete became — and continues to be — the material of choice for virtually every type of construction through its positive impacts on society.

“As we prepare for the challenges future generations face, concrete will be even more critical to building a sustainable world for tomorrow,” said Mike Ireland, president and CEO of the Portland Cement Association. “Concrete is the most durable, resilient, available and affordable material in the built environment, supporting sustainable economic, social and environmental development priorities, and the Shaped by Concrete campaign is how we’ll tell that story to stakeholders and partners.”

Shaped by Concrete will focus on key themes often overlooked and underrepresented in conversations and media coverage of cement and concrete, including their ability to meet sustainable development goals, decrease costs from natural disasters, and assist with key societal challenges, such as our nation’s housing crisis.

Concrete, made with the key ingredient cement, is the most widely used man-made material in existence. It is second only to water as the most-consumed resource on Earth. Once mixed, it can be molded into nearly any shape or use. As a sustainable building material, concrete provides energy efficiency, lower life-cycle costs and resilience following natural and man-made disasters.

However, because of its unmatched characteristics as a building material and the ability to readily use it, concrete is used in a significantly larger portion of construction — nearly all buildings — than other materials. Not satisfied with this already relatively lower impact, America’s cement manufacturers have undertaken significant efforts to aggressively address its impact on climate change.

Cement producers have a strong culture of innovation that has led to a 35% reduction in the amount of energy used to produce a metric ton of cement over the last 47 years. Company-driven improvements have also led to the increased use of alternative fuels. Alternative fuels, such as industrial byproducts that otherwise would end up in landfills, now represent more than 15% of total cement plant energy consumption in the U.S.

Further, exposed concrete (such as roads, buildings, runways, sidewalks, etc.) continually absorbs carbon from the atmosphere and captures it forever, known as carbonation, offsetting emissions from its initial creation. Cement and concrete enable emissions reductions in other industries too. Concrete is an excellent insulator, keeping buildings warmer in the winter and cooler in the summer, thereby reducing building emissions. When used as a pavement, concrete has a much longer lifespan than other materials, requiring less maintenance and ensuring smooth, stiff roads, which improve vehicle fuel efficiency.

“The industry has made major progress toward making concrete more sustainable, and it continues to push the boundaries of energy efficiency and emissions reductions through new research, technology and innovations,” said Jeremy Gregory, executive director, Concrete Sustainability Hub at the Massachusetts Institute of Technology. “Concrete will play a critical role in further decarbonization of the built environment, and I’m excited to see the stories of those advancements from ‘Shaped by Concrete’.”

Creating a resilient and prosperous nation

Concrete structures play a critical role in making communities stronger and safer. Of all construction materials for buildings and other infrastructure, concrete is by far the most disaster-resilient. Concrete improves durability of structures because it doesn't burn, rust or rot, and is resistant to natural disasters including fire, wind, water and vibrations. This is especially important in the face of increasing numbers of catastrophic weather events, where safe shelter during and after disasters can mean the difference between life and death.

That increased durability also provides economic benefits, especially in disaster-prone areas: every $1 spent on resilient building and construction can save $6 in recovery costs according to a recent study by the National Institute of Building Sciences. Considering that in 2017, the 16 largest weather events each caused over $1 billion in damage, savings from resilient concrete construction can quickly scale up.

Just as concrete plays a key role in the revitalization of the nation's infrastructure, so too does the industry serve as a driver of economic growth and building block of the construction industry. Cement and concrete manufacturing directly or indirectly employs approximately 600,000 people in the U.S., and the collective industries contribute approximately $100 billion to our economy. Ultimately, durable, reliable infrastructure enables a productive, prosperous society and is a critical part of meeting civilization's needs.

“From national security concerns to durability and safety in the face of natural and man-made disasters to enabling economic growth, cement and concrete make our communities more resilient,” said Tom Beck, PCA Chairman and President of Continental Cement. “‘Shaped by Concrete’ will help our industry show these important benefits and ensure cement and concrete continue to keep our nation safe, secure and prosperous.”

Cement and concrete have been foundations in advancing society from the earliest of civilizations dating back to iconic structures that are nearly 2,000 years old, such as the Pantheon and Colosseum in Rome.

Today, our country’s most significant investments in infrastructure, transportation, culture and development were built with cement and concrete. Infrastructure projects like the Hoover Dam and the Los Angeles aqueduct helped shape the Western United States. World-class museums, such as the Guggenheim in New York are as stunning on the outside as the master works are on the inside. And our country’s transportation system, from the Metro system in our nation’s capital to the many airports that connect our world, show how cement and concrete are part of our lives every day.

“We are excited to share bold, compelling stories of how we can make the world a better place, shaped by concrete,” said Ireland.

Form-A-Tube allows contractors to instantly construct forms for shoring up pilings with cement. The system builds forms of any size on site, making it easy to use even in remote locations.
Form-A-Tube
January 5, 2021
Follow Us