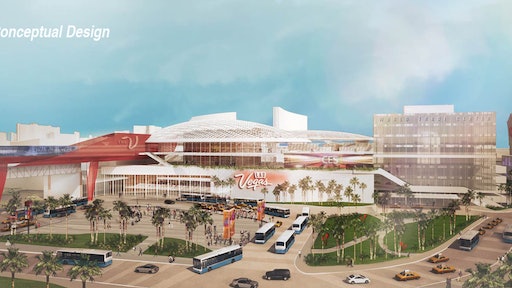 The new Global Business District is an overarching vision for the Convention Center and its surrounding area to create an international business destination.

The Convention Center offers more than two million square feet of exhibit and meeting space, 16 exhibit halls separable by movable walls and 144 meeting rooms. The Convention Center also currently features two restaurants, 16 permanent concession stands, two Starbucks cafes and portable snack bars. But all that will be changing in the future. The 54-year-old Convention Center will be undergoing a major renovation – the first major expansion of the building in more than a decade. In fact, it already has seen some renovations and improvements since CONEXPO-CON/AGG 2011.

In February 2013, the Las Vegas Convention and Visitors Authority (LVCVA) revealed its plans for the new Las Vegas Global Business District. The new Global Business District is an overarching vision for the Convention Center and its surrounding area to create an international business destination. The project is designed to be completed in phases over the next several years. The first phase will include programming and design, the development of overall budget, improvements to the current Convention Center space and land acquisitions.

This future Global Business District looks to address three key findings from previous research and focus groups. The first area of focus is renovating the Convention Center and creating a convention district campus.

The third area of focus is to create a centralized transportation hub that improves connectivity in the resort corridor and improves the customer experience.

While major renovations haven’t gotten started at the Convention Center, CONEXPO-CON/AGG attendees may notice some small differences and enhancements that have been made since the 2011 show.

Over the last few years, the Convention Center received $20 million in improvements to the building as part of an effort to enhance the customer experience. A few cosmetic changes have been made including fresh paint on both the Convention Center façade and the interior as well as more than one million square feet of new red carpet installed inside the Convention Center. Upgraded lighting in the Central and North Halls now delivers up to 20 percent more light with 42 percent less energy use.

The Green Parking Lot has also been expanded by eight acres to the lot near Desert Inn Road and Swenson. The Convention Center is also working on designs for two more parking lots for more convenience and access.

If you like to get your Starbucks in the morning before the show floor opens but hate waiting in a long line, the Starbucks inside the Convention Center now has an expanded store which features a double sided counter allowing for customer service on both sides.

If you’re an American Express OPEN card member – or would like to apply - stop into the new OPEN Business Lounge inside the main entrance. The 3,400-square-foot lounge offers refreshments, free WiFi, computer and printer access, and seating for meetings or a place to relax.

While still in the planning stages, major renovations are planned for the Convention Center in the future. These renovation plans include: