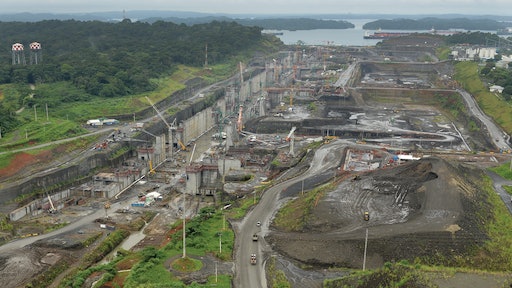 The Panama Canal Expansion Project was started in 2007 and includes for key construction sections. Overall project completion was 72% at the beginning of 2014.

The Panama Canal celebrates 100 years in 2014. Approximately 48 miles long, the canal serves as a passageway for ships traveling between the Atlantic and Pacific oceans. Construction of the original Panama Canal took about 10 years. According to the Panama Canal Authority, an average of 35 to 40 vessels transit through the waterway on a daily basis with an average of 14,000 vessels using the Canal every year. The Canal serves more than 144 maritime routes connecting 160 countries and reaching some 1,700 ports. It became clear that the Canal needed to be expanded to accommodate all the traffic flowing through it.

The Panama Canal Expansion project began in September 2007 at a total cost of $5.2 billion. While completion was originally planned for 2014, it is anticipated that the expansion will be finished in 2015. The expansion project has helped create more than 30,000 direct jobs.

The expansion project is designed to double the Canal’s capacity by creating a third lane of transit for vessels.

Post-Panamax locks. The new third set of lock complexes on both the Pacific and Atlantic sides for Post-Panamax vessels will include three chambers per complex, water-saving basins, a lateral filling and emptying system, and rolling gates.

The construction of a third set of locks – one complex on the Atlantic and one complex on the Pacific side – is probably the most complete project under the Expansion Program. The new locks have a cost of $3.2 billion, which is 60 percent of the program’s total budget. The third set of locks will be 30 percent larger than the current locks and can fit three empire state buildings lengthwise in its chambers, according to the Panama Canal Authority.

The contract for this project was awarded in 2009 to the consortium Grupo Unidos por el Canal, which is formed by companies from Spain, Italy, Belgium and Panama. The project started in August of 2009.

Each of the two lock complexes will features three chambers, nine water-saving basins, a lateral filling and emptying system and eight rolling gates. The valves controlling the water flow are being built in South Korea and shipped to the project. The first shipment of valves arrived in Panama in December 2012 while the second shipment arrived in January 2013, according to the Panama Canal Authority. The 16 rolling gates used to separate the chambers are being built in Italy, and the first four were shipped in August 2013.

The water-saving basins will allow the new locks to use 7 percent less water than the existing two locks as well as reuse 60 percent of the water required for each transit. According to the Panama Canal Authority, with the lateral filling system, each lock chamber will be able to fill in 10 minutes when the water-saving basins are not in use and 17 minutes when they are in use.

A project as big as the Panama Canal expansion means there is a multitude of contractors and subcontractors involved. With an international project like this one, the contractors on the job span the globe. Two of the design subcontractors are United States-based companies, including civil engineering company Tetra Tech headquartered in Pasadena, Calif.

Tetra Tech is one of three contractors involved in the design joint venture. The company has been involved with the project since the start and is still part of the on-going work. According to Dan Russell, project manager for Tetra Tech, the company’s Panama Canal responsibilities include both preliminary and final design and construction services for every permanent facility on the project except for some buildings. Elements Tetra Tech is responsible for include:

As of mid-December 2013, approximately 80 percent of the design work had been completed, Russel says. At the peak of the company’s work, about 35 Tetra Tech employees were involved in the project. Tetra Tech currenlty has about 15 full-time employees dedicated to the Panama Canal project with two of those employees based in Panama. To keep things running smoothly, one employee in Panama focuses on reviewing shop drawings while the other serves as a coordinator with the rest of the Tetra Tech team, the project owner, the main contractor and the design office. Russell worked as the coordinator for Tetra Tech for three years.

An international project of this magnitude presents a lot of challenges. One of the most obvious challenges is communication between contractors of different countries speaking different languages. Russell says the official language of the project is English, which helps ease some communication barriers. However, since many of the Panamanian workers speak Spanish, Russell says Tetra Tech had to bring in a few Spanish speaking employees to help translate.

What makes this project atypical of many international projects is that the codes used were mainly U.S.-based codes, Russell says. However, the codes and design criteria requirements were very strict meaning that all contractors and subcontractors have to be at the same standard and level of design quality and documentation. Software provided the main solution to this challenge. Russell says the design joint venture is using Globalscape, an internal storage system that allows all information to be shared on servers between the three contractors in the joint venture. Aconex data management software, a cloud-based system, is also helping the joint venture store and share all documents, which can then be downloaded from anywhere in the world.

“The Panama Canal is one of the engineering wonders of the world,” Russell says. For Russell and Tetra Tech, being involved in this project has been a special experience. “Even with challenges you want to be able to say you designed part of it.”

During phase one, Constructora Urbana (CUSA) of Panama worked on the initial phase of dry excavation which started in September 2007. The initial excavation required digging a 4.1-mile channel to connect the Pacific end of the Canal’s new locks to the current shipway. The contractor employed a variety of Cat equipment for the job including:

While CUSA was working on phase one, CILSA-Minera Maria, a construction company from Mexico, began the second phase of dry excavation. CILSA’s portion of the project included removing about 265 million cubic feet of earth from a 1.5-mile stretch as well as cleaning 360 acres of land and relocating 3.4 miles of road. The contractor was also responsible for preparing sites for the relocation of six electric transmission towers and line. CILSA also employed multiple types of Cat equipment for the job including:

Cat earthmoving equipment is also currently in use on the Pacific and Atlantic locks. A rough estimate from Caterpillar says there are approximately 199 pieces of Cat equipment in use on the locks phase.

The reinforced concrete lock chambers are under high scrutiny from the Panama Canal Authority (ACP). The ACP wanted a design life of 100 years, which is a challenge in an area like Panama that is seismically active. According to Wacker Neuson, approximately 300 Wacker IRFU 45 and IRFU 57 internal vibrators with 26-foot hoses were being used in early 2013 to ensure the concrete is free of any entrapped air and allow it to flow into corners and around rebar for an even pour. In addition to the IRFU vibratos, Wacker BS50-4s rammers, PT6LT pumps and CT36-5A trowels are also on the construction site for use on an as-needed basis.

Putzmeister equipment has been working onsite for the Panama Canal’s third set of locks since 2010. The equipment is placing the 1,400-foot-long by 108-foot-wide by 60-foot-deep floor and walls of the Canal in addition to constructing onsite batch plants and worker living quarters. The jobsite requires equipment that can place both gravel and concrete as well as stand up to the unstable terrain.

Six Telebelt TB 130 telescopic belt conveyors placed the gravel and concrete for the batching and crushing plant’s foundation. The telebelts did not need to be permanently mounted to the ground and could be moved if changing terrain conditions required. Plus, the telebelts were able place multiple types of material in the same day.

As for work on the third set of locks, four Thom-Katt TK 40 shotcrete machines are being used to stabilize excavation work while four truck-mounted boom pumps are pouring the walls – two on each side of the project.

The boom pumps are placing a Mass Aggregate concrete for the foundation of the locks which includes aggregate sizes from 1.5 to 3 inches. For any part of the locks that comes into contact with water, the equipment is placing a Marine concrete mix that is formulated to guarantee at least a 100-year life span with low permeability to ensure imbedded rebar does not corrode from contact with water.

According to Putzmeister, the equipment is working 24 hours a day placing a monthly target average of 110,000 cubic yards of concrete at each side of the project.

Putmeister equipment on the job:

Terex equipment has also been working on the Panama Canal expansion since the project began. Terex’s TR60 rigid trucks are being used to transport excavated material while its RT cranes are being used to move and position steel and concrete structures. Terex RL400 light towers can also be found in different areas of the jobsite to help light the way.

On the software side, Autodesk BIM software products have been a main part of the design process. Design contractors, including U.S.-based MWH Global and Tetra Tech employed a variety of software applications for the project including:

The Revit software is being used for the detailed designs of the new lock structures, buildings, control towers and supporting utilities. The Revit software also helps the team update geotechnical information so structural designs of the lock structures can be modified quickly. According to Dan Russell, project manager for Tetra Tech, Revit was the company’s main solution for Building Information Modeling (BIM) requirements. The software is being used to help the contractors look at possible interferences in the designs. While Revit is often used in building, Russell says this is one of the first times the 3D modeling software is being used on an infrastructure project.

Customers looking for an entry-level excavator with Komatsu durability and reliability can preview the new PC130-11 at the Komatsu booth (N-10825) at CONEXPO-CON/AGG 2020.
Komatsu America Corp.
March 13, 2020

The DX300LL-5 road builder is scheduled to be available in North America in May 2020 and Doosan plans to launch a road builder version of its larger DX380LL-5 log loader at that time.
Doosan Infracore North America LLC
March 12, 2020