Give Criminals their 15 Minutes of Infamy

Secure the jobsite with cameras to reduce vandalism and theft. 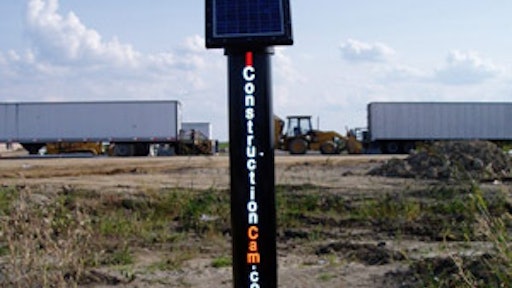 Theft on construction sites is an ongoing problem that racks up expenses in the billions of dollars. This probably comes as no surprise and is not news. Because of this, walking away from the jobsite most likely causes an uneasy feeling of having to leave hundreds of thousands - probably closer to millions - of dollars unmanned in an open and accessible area. By utilizing new technologies that monitor the construction site and reduce access to the valuable resources, leaving the site is becoming a bit more reassuring.

Cameras are emerging as a valuable tool for remotely viewing the jobsite and tracking the progress of production. Though as technology has advanced, so have the applications of these devices. Instead of being used as a monitoring tool, cameras are being implemented to deter and reduce theft.

One emerging security solution comes from ConstructionCam.com of Crown Point, Indiana. The jobsite video monitoring, archiving, time-lapse videos, and security company offers self-contained trailers that hold a 30-foot mast with a camera mounted on it. The cameras are full-motion and "live" vs. a still image or single angle camera. The user is able to pan/tilt/zoom the camera and see what is going on "live" in contrast to scanning around a still recorded picture.

The camera itself acts as a deterrent and monitoring solution, but an added element of security is also equipped within the trailers. "We integrated a technology into the trailers that creates an invisible fence around the designated area," says Mark Carroll, founder and CEO of ConstructionCam.com.

Four towers create the invisible fence, that when crossed, activate the cameras to capture video of the area where the fence was broken. The towers are solar- or wind-powered and include a backup battery for all day or night use. In all, the towers are wireless which negates the need for trenching communication and power lines.

"Once this happens the camera will be called up on the screen and the situation will be assessed by our staff," explains Carroll. "Sometimes it's a deer. However, if it requires contacting local authorities we take that action, the owner is notified and everything is recorded." The images are then immediately stored on a ConstructionCam.com server which allows the ConstructionCam.com team and the jobsite owner to view the images online via the provided custom website.

Carroll explains a common application of this security system that is utilized by contractors. "What these companies will do is set up a bone yard, and at the end of the day, they pull all of the equipment on jobsite into the fenced-in area created by the trailers."

Despite the secured perimeter, the equipment can still be accessed by service technicians and other employees that need to get beyond the fence. They are given a garage door-type opener and clicking the button will disengage the alarm system allowing them to drive through. Once they are on the other side of the beam it automatically engages itself. When they are ready to leave they simply repeat the same process.

The four towers essentially send a signal between one another to create the invisible fence. Carroll explains this process is reminiscent to Hollywood movies in which areas are secured with lasers. But unlike Hollywood the signal is invisible and cannot be seen by spraying an aerosol can over the area. In addition, the signal is cris-crossing so it is undetectable as to where it is. "Tampering with a tower or moving one so it looses communication with the other towers is also considered an alarm and handled appropriately," adds Carroll.

This type of security measure differs from traditional crime/theft prevention as is it a proactive system. "Our idea is why even let them on the jobsite?" asks Carroll. "We want to stop them before they get on jobsite. Instead of protecting a specific piece of equipment or material, protect the whole jobsite."

But what does it Cost?
A common practice of contractors is to factor in a contingency in the budget that accounts for vandalism, breaking of windows or other parts and other expenses related to unauthorized access to equipment. "I say all the time there is a cost for doing something and there is a cost for not doing something," says Carroll. "The system is going to cost you money, but you get a variety of benefits from it and you're protecting the jobsite. If you don't do anything then you're taking money that you would have spent to protect the jobsite and you're throwing it out in the wind for the thieves." And that's what they're banking on.

More Motion Sensor Security
Another solution activated by motion that is intended to act as a crime-deterrent camera system is the FlashCam. "The FlashCam is a self-contained, solar powered, high-resolution still camera," says Steve Hillsman, President of Q-Star Technologies. "The camera is triggered by a long-ranged motion sensor. When it is set off, it triggers an event that causes the flash to go off and image to be taken."

An audio voice/warning, recordable by the user, is also announced prior to the image being taken. "Typically what happens is that if someone is up to no good, the loud voice paired with a bright flash turns them around and they move on," says Hillsman.

The solar-powered FlashCam is mounted on a pole or other tall object and pointed in the area of desired monitoring. Once an image has been taken it is stored on a standard SD card in the camera or users have the option of using 802.11 wireless access to view and download the images. With its strengths and limitations, the FlashCam is primarily a deterrent tool but can also be used effectively for site perimeter monitoring. An ideal application of this product would be to help alleviate the problems of equipment theft, vandalism and graffiti. The system can also be effective in reducing liabilities associated with unauthorized site access containing dangerous equipment.

FlashCam has been used in applications where it has proven successful and could be implemented on construction sites. "One of the things we found is that the camera can be very effective at deterring copper theft," explains Hillsman. "I think a lot of field-intensive industries have a great deal of this theft and this camera is well suited for that application."

Portability of the camera may also be a draw to the construction industry. "Because of the quick attachment and transporting capabilities, it is easy to move to another site," explains Hillsman. "The nice thing is that it can go along with equipment."

Whether your goal is to restrict access to the jobsite or deter troublemakers from vandalizing your equipment, solutions exist that will boost you confidence that your equipment will be where and in the same condition you left it.

See the improvements first-hand in a video walkaround highlighting the new features that enhance the customers' overall experience
April 21, 2021
Latest