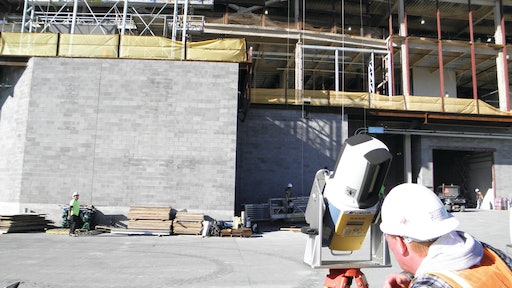 A tilt bracket allowed Schuff Steel to scan its steelwork from one level.

Install 11,000 tons of structural steel where the official building survey dictates and creating a 162-foot wall that resembles the body of a guitar on the new Music City Center in Nashville.

Schuff Steel Atlantic is erecting structural steel that will form the interior backbone of what is arguably the Music City Center's most distinctive architectural feature: a 162-foot wall at the north end of the main structure that rises out of the main roof and resembles the body of a guitar from a bird's-eye view. The metal panel wall will enclose the grand ballroom on the ninth floor.

The contractor is using high-speed precision scanning technology to lay out the structural steel for the radial shape of the guitar wall.

Schuff Project Superintendent John Fugera notes that the design tolerance is 1/4 of an inch and 3/8 of an inch around glass. A failure to adhere to the tolerances would cause an undesirable snowball effect, Fugera points out. Work from contractors installing glass, cut stone and metal panels would also be off. ""We drive the bus - if we're wrong, then everybody else is going to have issues down the road."

In March 2011, Schuff began laying out and erecting the steel framework for the guitar wall on the north side of the building. The contractor worked in a clockwise direction from the north side, ensuring that every quarter-inch of the steel beams was positioned precisely in the as-built surveys it had contracted to provide. Schuff used a total station for this task on the straight wall section it started on. "It wasn't until we got into the curvature section that we figured that the scanner would give us a lot more accuracy," Fugera says of Topcon Positioning Systems GLS-1000 and GLS-1500 laser scanners. Given the design of the radius walls, determining the X, Y and Z dimensional locations of every quarter-inch of the steel beams using conventional surveying equipment would have been too costly, according to Fugera. Schuff rented the scanners from Earl Dudley, Inc., a surveying and geospatial equipment dealer with five locations in the Southern United States.

This process would have been especially cumbersome on the east side of the Music City Center where the guitar wall on features eight radius variations and five pitch variations at the roof.

Fugera estimated that it would take at least two weeks to shoot the estimated two million points required to as-built survey Schuff's steelwork on the long east side of the guitar wall, which has an estimated 4,000 to 5,000 connections to the main steel structure. He estimated it would likely take three or four more weeks to determine where Schuff's steelwork was located relative to the main steel structure. The laser scanner allowed surveying from ground level, whereas the total station would have been operated on an aerial lift at various levels.

Chris Clay, RLS, Schuff's licensed surveyor on the project, operated the total station on the project. "Shooting two million points - I don't know that you could get it in two weeks," he said. "Even if you stayed out here 24/7, you'd run out of battery on your total station." Clay agreed with Fugera that laser scanning was the only realistic way to develop an as-built survey of the steelwork.

In late fall 2011, Schuff was erecting steel near the southeast corner of the facility and continuing to work its way around in a clockwise direction. Clay set up the GLS-1500 outside of the guitar wall at ground level. He identified several magnetic targets that had been placed on several steel beams forming a large horizontal rectangle on the eighth level. The target locations were surveyed with a total station and tied to the grid formed by control points based on the official building survey and a three-dimensional BIM model of the entire building. He measured the center of the targets from building control points using a total station and scanned the targets. The GLS-1500 resectioned in order to establish the position of the instrument relative to each target. By doing this, Clay tied the target locations to both the building model and the official survey grid.

Clay added that a specially designed tilt bracket boosted productivity and safety by allowing scanning from one level. He tilted the scanner at a 45-degree upward angle and entered the project number into the GLS-1500 keypad, including his initials in the event that Fugera had questions about the locations of any points in the cloud later. Since this scanning sequence covered the eighth level on the south side of the building, Clay named the first scan 8S-1 and the targets T1, T2, etc. Clay scanned the targets from left to right and then bottom to top.

First, Clay dialed the top of the GLS-1500 turret head to the left using jog wheels located on either side of the turret head. He used the instrument's sighting columnator to aim the GLS-1500 toward the upper right corner of a steel frame for a parapet located just above a block wall to his left. After waiting several seconds for the instrument to calibrate, he scanned the first target. Next, he swung the turret head to his right toward a target located on a vertical steel beam on a flat wall just below the guitar wall. "We'll scan all of the targets first, then we'll set up a scanning area and all of the points will be inside of that area," he said.

Clay used a total of seven targets for his control; it is recommended that at least four targets be scanned. After all the targets were scanned, Clay set the scan area by turning the turret head to an arbitrary point at the top left and an arbitrary point at the bottom right of the area he wanted scanned. He input the desired point density on the keypad. The point cloud was defined by these arbitrary points. These points were slightly outside of the control targets so that previous and future scans of nearby areas could be blended together. Clay then confirmed the area to be scanned and the scan commenced.

Putting the Data to Work

After Clay finished the scanning sequence, raw point cloud data were copied from the data card in the GLS-1500 and sent to Adam Arrington, PE, vice president at Earl Dudley. Arrington received the point cloud data, scanned images, and a file containing control point data and imported them into Topcon ScanMaster software. He registered the data together in ScanMaster, essentially performing quality assurance/quality control on the data, and stripped the file down into Schuff's steelwork and surrounding structures that Fugera needed to view in order to ensure correct relative positioning.

Taking a PCG file provided by Arrington, Fugera imported the point cloud and dimensional data into AutoCAD using kubit software. The kubit software allows Fugera to compare the point cloud coordinates with the AutoCAD building model that is based on the official survey. ScanMaster Viewer allows him to view images of Schuff's steelwork from where the scanner was located and point coordinates. Along with the ScanMaster and AutoCAD files, Fugera viewed Schuff's steelwork against the entire building structure on a Tekla Structures file developed by Schuff's drafting department.

"Once I get a scan, I primarily use ScanMaster to make sure that I've got everything I need, and if I don't then I direct [Clay] to do another scan in a different area to catch what he's missed," Fugera said.

The modeling process allowed Schuff to make immediate incremental corrections to its steelwork when necessary. "Using the point cloud actually locates [the steelwork] exactly where it is compared to where it should be, using base control that we establish throughout the building and through the 3D model showing where it's been designed to be," Fugera points out. "The scan and the point cloud give me an exact picture of where everything is. I'll go through and start pulling dimensions; if I can see that any points are off of my model, I start writing down what's got to move, how far and which way. The point cloud and the scan give me the whole face of the building and let me know exactly where everything is."

The 1.2 million-square-foot Music City Center in Nashville will have plenty of design features and spaces for visitors to talk about when it is scheduled to open in February 2013:

It will also feature several sustainable features that put the new convention center on track to achieve Leadership in Energy and Environmental Design (LEED) Silver certification from the U.S. Green Building Council:

In March 2010, Topcon unveiled the GLS-1500, which collects points at a rate of 30,000 points per second - 10 times that of the GLS-1000 - and a range of 150 meters. Topcon Precise Scan Technology is designed to allow high-accuracy measurements over a wide range of distances. Lens array optics technology maintains distance accuracy from 1 to 150 meters and additional ranging past 330 meters is possible.