How to Get 3D Machine Grade Technology Without Breaking the Bank

K D Equipment Corp. proves smaller contractors can profit with the step up to 3D grade control for earthmoving machines 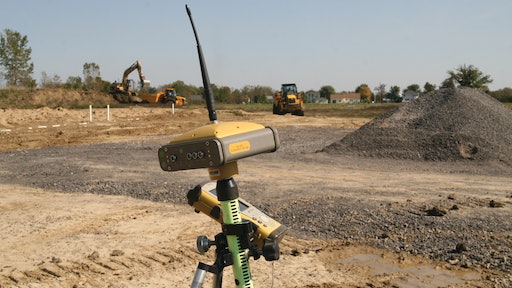 Once set up, the 3D system saves time on the job by eliminating staking and re-staking and saves on material costs by allowing accuracte cuts.

No doubt about it, full-blown 3D automated grade control systems for earthmoving machines are often outside of the budget of many contractors. But there are affordable ways to work your way up to 3D grade control technologies while staying within budget.

No one can dispute the time and cost savings associated with 3D grade control systems. Large contractors understand the value with projects that can run into several million dollars and have rapidly adopted the technology. “There are fewer and fewer of them that are not equipped with some form of GPS,” says Frank Rivett, K D Equipment Corp., Clarence Center, NY.

But the decision on how to approach the technology can be more challenging for a smaller contractor. Consider a dozer fitted with an automated 3D grade control system. “To equip a dozer, the boxcar number they are throwing around now is about $70,000 per machine,” notes Rivett. Then you need a rover and base station to send the necessary signals to the dozer, which adds $30,000 plus to the total. “If you do $1 million in sales, and this machine with base and rover is going to cost you $100,000, that is 10% of sales.” That’s difficult for many to justify. But that doesn’t mean it’s not possible to position your company for future growth by investing in 3D technology.

K D Equipment Corp. performs all types of work from additions right up to subdivisions. This includes a lot of new home excavation, underground utility infrastructure and final grading. It currently has 14 pieces of mobile equipment.

Despite the company’s size, Rivett understood the benefits of 3D technology and looked for the right opportunity to make the leap. In 2008, he used CONEXPO-CON/AGG as an opportunity to conduct research. He also relied on advice from larger contractors with whom he developed a relationship while selling equipment. When a large subdivision project presented an opportunity, Rivett purchased a Topcon HiPer Lite base and FC 200 field controller.

That initial $35,000 investment has paid off. Not having to wait for surveyors and reduced staking and material costs by cutting grades accurately have yielded substantial time, material and cost savings. “We don’t have any regrets looking in the rearview mirror,” Rivet states. “It has been well worth the investment.”

A base station and a rover can be a very good first step. “This is an excellent place to start because you are not getting thrown into GPS technology totally ignorant of what it will or will not do,” says Rivett. “The base and rover is a great place to start so you understand a lot more of its capabilities. It gives you that bigger picture.” People often associate this technology with finish grading. It is much more. “There is a lot more work before you get to the finish grading.” GPS technology can help with many different aspects of the project.

But uncertainty of the technology can cause contractors to resist adoption. It is natural to question any new technology until you understand how it works. “The first time it can scare the hell out of you quite honestly,” says Rivett. “You are assuming all the responsibility that the centerline of the road, sewer, etc., is in the right spot.” He admits that on the first job, every measurement was checked by conventional techniques just to make sure. You need to build confidence that you are correctly operating the system.

These are sophisticated systems that sometimes require technical support. Rivett realized that his company didn’t have the resources internally so it needed to rely on the system supplier for outside support.

Local support was a key consideration. “I needed a dealer who could give me backup with what I call the ‘geeky’ people,” says Rivett. “If there is a glitch with this thing, I don’t want to hear the guy is 150 miles away.”

For K D Equipment Corp., the solution came from Admar Supply, which was able to provide the services of Mike Conley, a positioning support specialist. This proved valuable on an important job.

“We had a job a couple of years ago on a golf course where we were putting in some sizeable ponds with some big excavations. There were aquatic benches and all kinds of detail,” Rivett explains. “About the fifth or sixth day into the job, the system had a glitch.” Mike was 50 miles away and was able to drive to the site and correct the problem. “He got me up and running that night.” The project was completed successfully due to the 3D system. “We saved all kinds of money.”

While support is vital to success, it’s important to note this technology does require some technical knowledge. “If you listen to the GPS system suppliers, they will exaggerate to a certain extent how simple this is,” cautions Rivett. “You better be a little bit computer savvy.”

Electronic model creation can seem intimidating when you are starting out. Large companies will often have in-house capabilities such as surveyors on staff who can develop electronic models. This is not true for many smaller contractors.

“For us, because we are small, we don’t have a full-time surveyor,” says Rivett. “We don’t have IT people on our payroll just waiting to build the next model.”

But there is no shortage of companies willing to develop electronic models. They range from engineering companies and surveyors to GPS system providers.

Rivett prefers to use surveyors vs. engineers as a source of electronic models. “In our experience, the engineers who have designed this thing really don’t comprehend what we want to see,” says Rivett. “They have all kinds of information, but it is too much; we have to decipher it and kick out those line items. Whereas, the surveyors have a much better feel for what we need to really build the project. The trick is having a model that has the right information so you are not overwhelmed or overloaded with stuff that you don’t need and that you would never use.

“Once they build the model, I use the same surveyors to come out on the site with us and set up the control points, so we are on the same page,” he adds. “If there is a glitch, I just call that surveying company and we can work through it.”

The next step for K D Equipment Corp. is machine automation. The base and rover investment has already been made and the company understands how the technology can be applied. “We learned with the base and rover what the capabilities are,” says Rivett. “We have rented some GPS- equipped dozers from some of my fellow contractors, so we got into some cuts and fills and fine grading. We could use one of their units and run it off of our base unit. It is pretty amazing what they can do.”

As to future investments in GPS, they will be made as larger projects begin to resurface. The challenge for K D Equipment Corp now is to decide if the first GPS machine control system should be on a dozer or an excavator.

May 26, 2014
Latest in Construction Technology