How a Drone Can Make Your Asphalt Plant More Profitable 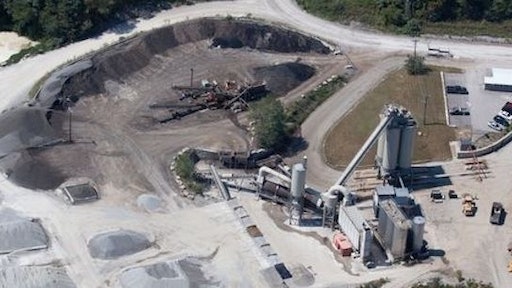 Using drones to monitor and manage stockpiles, Lousiville Paving saves up to $1,000 per quarter per plant location.

Unmanned aerial systems (UAS) or drones seem to be dominating many conversations in the construction industry. The asphalt industry has taken these drones from a marketing tool and turned them in to a real way to increase profits in their plant operations.

John Dougherty, owner of Louisville Paving and Construction based in Louisville, KY, says the use of drones has revolutionized the way they do business and they continue to find new uses for them every day.

“Being a pilot, I like anything to do with flying so when I noticed drones at World of Asphalt three years ago, I immediately recognized the speed that they could bring to many labor intensive tasks,” Dougherty says.

One of the first things that Dougherty thought the drones could help him with was stockpile management.

Think about how you currently manage your stockpiles. If you’re like most plant owners, you have a worker physically go to each stock pile with a GPS rover, climb up and down the piles marking points and tracking the data. That captured data is downloaded and checked before loading into a take-off program that converts the volumes into tons. Not only is this exhausting for your worker, it can take them up to four days per plant to complete.

Dougherty estimates the old process would cost his company $1,080 in labor  to complete per plant. That’s at a rate of $45/hour for 24 total hours.

Compare that to using a drone and Dougherty is saving himself almost $1,000 per quarter, per plant. Here’s how:

Dougherty estimates this process takes him about 20 minutes and once a good flight plan is established, it can be reused for future flights so this step is eliminated.

“Once onsite, there is a pre-flight checklist that I go through ever time, just making sure that all the components are in good working order and the conditions are right to fly,” Dougherty says. “The preflight checklist, GPS acquisition and calibration takes about 15 minutes. Flight time varies depending on location and area needed to cover, we can fly all our Middleton Plant in one flight that lasts about 10 minutes.”

During flight, the drone’s camera is busy taking a series of overlapping images with GPS coordinates. GPS coordinates on the images are being converted into 2D and 3D maps that are used to create a point cloud that forms a visual 3D model. Once on the ground, the data the drone has collected is processed into a program called PIX4D Mapper. From those images and data, Dougherty can produce output analytic data such as volumes and contours of the materials on the property. That data can be stored in his existing take-off program and the flight plan reused.

Dougherty says stock pile management using drones has a labor cost of $90 to complete per plant. That’s for 2 hours at $45/hour. That's almost a $1,000 saved with this use alone.

“Before we used drones, we didn’t really have a process for plant and quarry stockpile management and there were times we might be down waiting on materials,” Dougherty says. “Now, we monitor both our stockpiles and our quarries to anticipate supply problems to allow us to make job mix formula (JMF) adjustments as needed before we need to interrupt our crews.

“And since we can more easily monitor our stockpiles, we do it more frequently now was well,” Dougherty continues. “This allows us to forecast potential deficiencies in products, enabling us to plan accordingly.”

Dougherty says to work with your vendor to be sure you’re not only getting the drone to best complete the work you want, but also the software.

“An internet search can find almost anything you need, but you need to talk to the vendor and be satisfied it will do what you want it to do,” he says.

While you may think that no one knows your asphalt plant like a maintenance team in the trenches every day, you should consider that drones can help your team do the same inspections, not only safer, but also more efficiently, saving both time and money.

Drones can easily fly up to areas on the plant that are difficult to reach, keeping your crew safe on the ground. Dougherty says drones make it easier to monitor and document elevated ductwork, drag conveyors and bin tops for any issues. The images taken can be inspected by plant personnel and potential problems can be more easily caugh before they cause any real issues.

“If we can catch plant problems before they result in a breakdown, that leads to huge cost saving implications,” Dougherty says.

Plan to use your drone as part of the daily walk around, especially on portable plants to make sure everything is up and running before the guys on the jobsite can even think about being delayed by a plant breakdown.

Drones are also great for helping your company plan out projects.

With the same 3D mapping that Louisville Paving uses for stockpile management, Dougherty also uses his drones to map topography of jobsites before crews even get onsite. He says this can help with the bid process if they suspect a quantity bust on a job.

“We overlay the typo we take with the drone on to the plan design and generate our own quantities,” Dougherty says. This can help them accurately bid jobs and turn them down if the profit won’t be there based on their quantities.

“We also fly all site jobs after they are cleared to check elevations so we can verify quantities before we even get out there,” Dougherty adds. “Many existing elevations on plans coming from the engineer are generated before the site is cleared which impacts the accuracy of the results. Obviously, knowing the actual elevations is beneficial.”

In addition to mapping the typography of a jobsite in order to manage quantities, drones can inspect jobsites for silt control, security and progress. This helps with project information dissemination as drones can let any member of the project team know the project status after a quick 15 minute flight. Drones can generate as-built models that can be sent to project managers to identify any delays or budget overages.

This also adds to increased safety as drones are able to quickly identify hazards even on large jobsites.

Originally, Dougherty was just thinking he’d use his drone for stock pile management but now, “we’re still finding uses for it,” he says.

Drones can cost anywhere from $1,000 to $30,000 depending on what capabilities you desire. The more you want the drone to do, the more the unit and the software will cost.

Some contractors simply want drones for taking aerial shots of completed work for marketing. Before drones, about the only way to get these shots was to hire a pilot who could take shots from their aircraft. At a minimum cost of $600 per flight, purchasing a low-cost drone would be worth the investment.

“Aerial photography and videography of jobsites make for great marketing tools wheter online, print or when pitching jobs in person,” Dougherty adds. “And it’s great PR with clients as everyone is fascinated with drones.”

While anyone can purchase a drone, contractors are most likely operating their drones for commercial use and need to insure they are covered before they can operate their drone legally.

The Federal Aviation Administration (FAA) currently authorizes the use of UAS/Drones for commercial or business purposes on a case-by-case basis. You may not fly your UAS/Drone for commercial purpose without a Section 333 Exemption. Dougherty recommends becoming a member of the Unmanned Aerial Vehicle Systems Association (UAVSA) for help this this.

UAVSA’s multiple Part 333 Exemption Services program is designed to assist all UAVSA members in understanding, participating in, applying for and receiving a 333 Exemption for the authorized flight of drones in the National Air Space (NAS).

Since the process involved in applying and filing for a 333 Exemption can be complicated and laborious, UAVSA provides to its members a 333 application service assistance program to help them get the hard work done efficiently and affordably.

In addition to the Section 333 exemption, there are three other specific items the FAA lists as “main requirements” you will need to operate unmanned aircraft in a business capacity:

As of Dec. 21, 2015, FAA’s final interim rule (FIR) was in full effect, requiring anyone in possession of a drone to register it—at a cost of only $5.

You will also need to ensure your drone is properly insured which most insurance companies have readily gotten onboard with based on the increasing popularity of drones. UAVSA can also assist contractors with this, visit http://www.uavsa.org/ for more information.

GSSI will make 100+ virtual and in-person classes will be held in 2021.
Geophysical Survey Systems (GSSI)
May 17, 2021
Technology & Services

Managing Water Risk and Damage Costs on the Construction Jobsite

A water leak left unattended can delay a building project for weeks or months and cost millions in damages and rework. In this Q&A, learn how specialized technology can help you effectively mitigate these risks.
May 17, 2021
Construction Technology