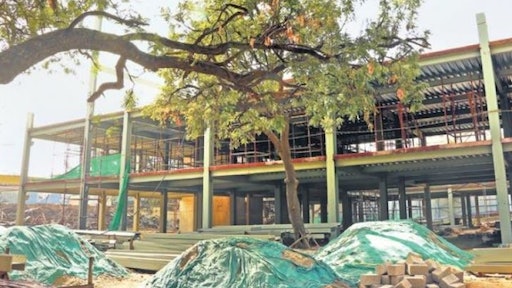 An news outlet in India has reported that the city of New Delhi is using advanced construction technology to reduce pollution on the jobsite.

The New Indian Express reported that the New Delhi Central Public Works Department has adopted a non-polluting, dry construction technology to build two major office blocks. The city has identified construction site dust as one of the city's greatest pollutants.

Two office buildings, one at 49,000 sf and the other at 44,000 sf, will be the first in the city to be built using the new non-polluting dry construction technology. Work began in August and is expected to be complete in March.

The dry construction technology reportedly uses less water and involves light gauge steel frames. The foundation consists of reinforced cement concrete with a crystalline admixture and zinc cathodic protection system to reduce the porous nature of concrete and corrosion, increasing its durability. Components are pre-constructed and no welding is required at the construction site.

The steel frames are covered with cement fiber boards along the external walls. On the interior, cement fiber boards are used with gypsum boards and rock wool is used for thermal insulation. No water is required for concrete curing or cement plaster work. Dust is not generated during the construction process, says VK Jaiswal, director general of the city public works department.

Dry construction technology forms about 80% of the work. Energy and water efficiency besides other environment-friendly practices have been adopted to make the buildings green.