Boston Dynamics has released version 2.1 of its autonomous robot, Spot. 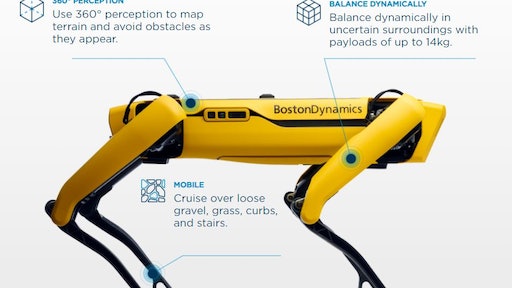 Version 2.1 of the robot Spot was recently released.
Boston Dynamics

In Spot’s first year on the market, Boston Dynamics reports it has seen diverse teams in an array of industries put the robot to use. During this time, the company worked closely with hundreds of Spot users to understand their application development workflow: how they attach sensors, analyze data, and integrate the robot into their existing systems. Common obstacles were identified and mapped out an easier path to implementation.

Spot Release 2.1 acts on those insights and makes it easy to attach sensors, collect and save data and integrate that data into existing systems. With 2.1, there are several features that make Spot immediately useful out of the box for autonomous data collection missions. These can be used by operations teams to repeatedly collect vital data in dangerous or remote sites.

Attaching new image sensors, like off-the-shelf spherical or thermal cameras, is now as simple as editing an example script and installing its docker container onto the Spot CORE compute payload. The new image sources show up on Spot’s tablet controller, and users can trigger captures in both teloperation and the easy-to-use Autowalk autonomy system. Spot can now be used to collect training images for computer vision models, to visualize data and model output live on the tablet controller, and to capture data from custom non-visual sensors like gas detectors or laser scanners.

Spot now has the ability to attach metadata to images, associating them with the robot’s location, user-defined labels, or custom values such as GPS coordinates from an attached payload. This enables users to put their data in context, for example: combining site photos from multiple missions into a single view, sorting images by asset-ID, or collecting datasets for computer vision model training.

The data collection workflow has been significantly streamlined. Users can capture data manually and autonomously in Autowalk and download it to the tablet’s SD card for easy off-robot use. Common actions and callbacks can be configured on the tablet for quick use during operation. We’ve also made numerous under-the-hood improvements to Spot’s industry-leading locomotion and autonomy, further enabling operators to focus on the job and not the robot.