A research team at Mississippi State University is developing a deicer for lightweight aircraft, including drones. The technology could allow drones to fly during icy conditions. 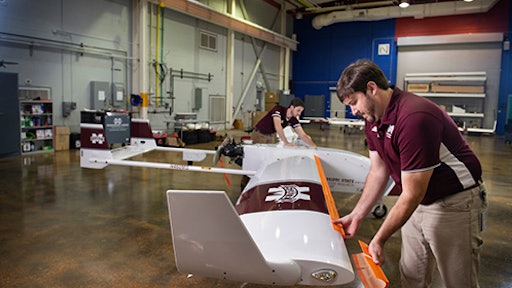 Mississippi State engineers in the university’s Raspet Flight Research Laboratory are working on research that could make unmanned aircraft systems (UAS), including drones, operational by the U.S. government as well as civilian aviation in icy conditions.

MSU is leading an icing system development and technology team in what the U.S. Department of Defense (DOD) hopes will result in lightweight anti-icing systems, leading to certification for UAS to operate in forecasted icing conditions. The DOD recently awarded $5 million for this effort, which also includes the university’s aerospace engineering department and several industry partners.

The entire team is evaluating the use of a new carbon-nanotube coating, part of an intelligently-controlled ice protection system. One aspect of the flight testing includes 3-D printed ice shapes designed by Raspet to mimic frozen formations affixed to the wings. Results from those tests help inform the development of the ice protection system.

“Our innovative approach allows us to replicate the most severe in-flight icing conditions without traveling to cold and remote areas,” says Tom Brooks, Raspet interim director. “This allows us to conduct nearly unlimited test flights at a much lower cost and generate the data we need to develop effective, low-cost and retrofittable anti-icing system solutions for use on today’s sophisticated unmanned aircraft.”

“As ice builds on the wings, a process scientists refer to as ice accretion negatively impacts the aerodynamics of the wing,” Brooks says. “Raspet’s application of these 3D-printed shapes to aircraft wings enables our researchers to validate the computer modeling used to predict changes in lift and controllability caused by the ice.”

Today’s traditional ice-countering technologies used on commercial and private airplanes, such as antifreeze pumps to spray the wings or inflatable bladders expanded on wing sections to dislodge ice, are too heavy and energy intensive to work on UAS. The newly-developed coating for UAS has extremely high heat conductivity, allowing it to transfer warmth from small heat strips on the wings’ leading edges to counter ice formation.

If proven successful, the ice protection system, which is retrofittable to existing aircraft and easy to install, would also be of interest in the civilian aviation industry, Brooks explained.

“Because it’s easy and inexpensive to install on existing aircraft, this lightweight anti-icing system has tremendous potential for use in general aviation,” he said.

Other Raspet partners include Ohio’s private, nonprofit Battelle Memorial Institute, Kansas’ Ultra Electronics subsidiary ICE Inc., and Pennsylvania’s Navmar Applied Science Corp. Home to a fleet of the largest and most capable unmanned aircraft in academic use, Raspet has landed some $50 million in federal research and testing contracts since 2017 and remains a world leader in composite materials research.