Flexiv has closed on more than $100 million in a Series B funding round with major investors. 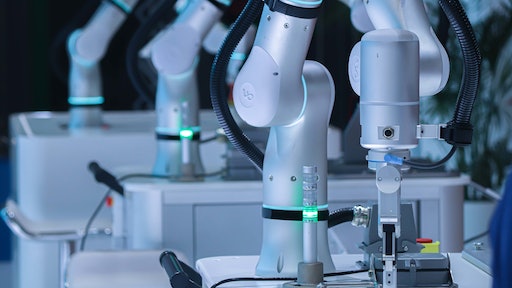 Flexiv, which develops and produces robotics for industry, has announced new funding.
Flexiv

General-purpose robotics company Flexiv Ltd. has closed an more than $100 million in a Series B funding round with major investors including Meituan, Meta Capital, New Hope Group, Longwood, YF Capital, Gaorong Capital, GSR Ventures and Plug and Play, marking the largest single-round fundraising ever in the field of general-purpose robotics, according to the company.

“The strategic funding from leading companies and funds in various industries will mainly be used for mass production and marketing, new market development, and cutting-edge R&D. We will continue focusing on automation transformation of the manufacturing industry while exploring new applications in a broader range of industries including services, agriculture, logistics, medical care, and so on. With business opportunities from new investors that cover almost every industry, we will be able to develop and refine our products and robot AI in a diversity of real application scenarios, which greatly benefits our development of the most advanced general intelligence and robotics technology,” says Shiquan Wang, co-founder and CEO of Flexiv.

Flexiv Ltd. is a robotics company that develops robotics and AI technologies and applies them across all industries. Four years after its founding, Flexiv has completed its core hardware and software products development with more than 100 technical patents submitted and has validated its primary business model, now becomes ready for further business expansion.

In 2019, Flexiv completed its series A+ with accumulated funding of $22 million. In April 2019, Flexiv officially launched its first product, the world's first adaptive robot Rizon. In 2020, Rizon received global recognition for its design and product value by winning both the iF Design Award and German Innovation Award. The company has manufactured over 100 adaptive robots and developed a number of reliable and unique industrial applications after dedicating a tremendous amount of time and resources in product verification and iterative optimization in the fields.

“Flexiv developed adaptive robots with sophisticated force control system and cutting-edge AI technology that mimic human behavior, bringing the versatility and intelligence of robots to a whole new level. Notably, Flexiv has now achieved mass production and successfully validated its customer value and core business model. We believe that Flexiv’s products will bring unique value to a much broader range of application scenarios, and effectively accelerate the transformation and automation in different industries,” says Bin Yue, the founding partner of Gaorong Capital.

In addition, research results from Flexiv’s AI team have been published in academic journals such as Nature-machine intelligence and Engineering where the concept of general-purpose intelligent agent system has been defined for the first time and has broken world records of different benchmarks in multiple AI-related fields for 18 times, according to the company.

“I’m very pleased to see that Flexiv has paved a unique path of robotic hardware and software technologies to bring the capability of force control robots to real-world applications. The Rizon robot, which establishes an effective fusion of advanced force control and cutting-edge algorithms, represents a major milestone for future robotics development,” commented Oussama Khatib, Chair of IFRR and director of the Stanford Robotics Lab.

Managing Water Risk and Damage Costs on the Construction Jobsite

A water leak left unattended can delay a building project for weeks or months and cost millions in damages and rework. In this Q&A, learn how specialized technology can help you effectively mitigate these risks.
May 17, 2021
Construction Technology