More than three out of four construction professionals have experienced jobsite theft. 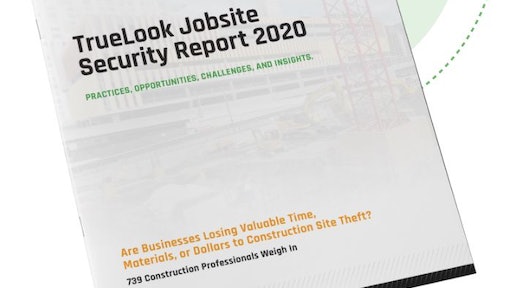 Winston-Salem-based construction camera provider TrueLook's 2020 Jobsite Security Report surveyed 739 construction professionals and security managers in Q1 of 2020 to assess their perceptions about jobsite security and the obstacles they face.

Analysis revealed that although construction professionals know that theft is rampant, many firms are slow to adopt the sophisticated surveillance and security solutions they need. Key findings of the report include:

TrueLook Product Manager, Jimmy Hodson, will be presenting further findings of this report during a webinar with Construction Executive on April 15, 2020.

“With theft being such a prevalent source of loss for our customers, we want to make sure we’re doing our part to make for more secure jobsites,” said Hodson. “Our experience, along with data from this report, suggests that the best way to secure jobsites is through a multi-layered approach including the use of construction cameras.”

Don't Be an Easy Target for Equipment Theft

Keyless alarm system for equipment with a 12- or 24-volt system is designed to eliminate physical keys and solve the issue of unauthorized use.
Ukey
December 28, 2020

5G implementation makes it possible to send an almost unlimited amount of visual data from the jobsite.
EarthCam Inc.
October 30, 2020