Going Global for the Panama Canal 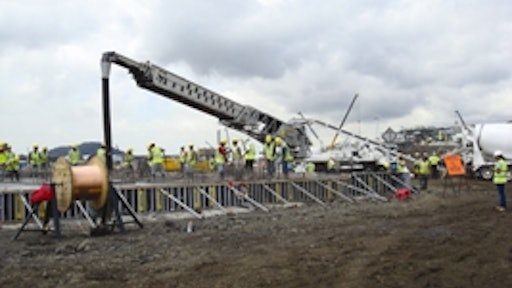 Putzmeister America, Inc. and its Special Applications Business group are providing their complete global systems approach, including their pumping and material placing equipment, to the historic Panama Canal Third Set of Locks project. The Third Set of Locks will create a new third lane of traffic along the Canal, doubling its capacity and allowing more traffic and longer, wider ships to pass through.

The Canal's History
It was first determined in the 1930s that the most effective and efficient way to increase the Canal's capacity was to construct a third set of locks with larger dimensions than those of the locks built in 1914. The United States initiated the construction of the Third Set of Locks in 1939 to allow the transit of commercial and war ships that exceeded the size of the existing locks. The expansion was halted in 1942 because of the outbreak of World War II.

Interest picked back up again and studies in recent years by the Panama Canal Authority, the owner/developer of the project, pointed to the same solution as was deemed in the 1930s, that a larger, third set of locks would be the most suitable, profitable and environmentally responsible way to increase Canal capacity and allow the Panamanian maritime route to continue to grow.

The Third Set of Locks
There are four objectives the ACP has put forth for this project, and they include: making long-term growing and sustainable contributions to the Panamanian society through the payments the Canal makes to the National Treasury; maintaining the Canal's competitiveness as well as the value of the Panama maritime route to the national economy; increasing the Canal's capacity in order to capture the growing demand with the appropriate level of service for each market segment; and increasing the Canal's productivity, safety and efficiency.

There are three main components of the project.

The design-build contract for the project was awarded to Consortium Grupo Unidos por el Canal, which is made up of four companies: Sacyr Vallehermoso S.A., Impregilo S.p.A., Jan De Nul n.v. and Constructora Urbana, S.A.

Construction started in late 2007 and the target date for completion is August 2014 - 100 years after the initial locks on the Canal were opened.

Global Resources
Bob Weiglein, Telebelt division manager for Putzmeister America, traveled to Milano, Italy, where he was introduced to Mr. Alberto Buffa of Impregilo S.p.A. by the president of Putzmeister Italy, Dr. Rober Abel, to discuss what material placing solutions Putzmeister's SAB unit could offer for the Third Set of Locks.

"SAB is a partnership between Putzmeister America, Inc., Allentown Shotcrete Technology, Inc., Esser Pipe Technology and Maxon Industries, Incorporated," says Weiglein. "This partnership offers a complete systems approach that offers all products to all projects around the world, to customers in tunneling and mining, dams and power generation, transportation, and marine and offshore industries."

In the meeting it was expressed that flexible, maneuverable and mobile material placing systems were key because of the job site's unstable terrain.

After the meeting in Italy, SAB and Agreconsa, Putzmeister's local dealer for 24/7 parts, service and support in Panama, worked together to determine what system solutions would be ideal for various components of the project.

"Agreconsa is a well-respected distributor in Panama and takes great pride in the sale and service of Putzmeister equipment," says Weiglein. "They are committed to Panama, it's economy, and work together with us to provide exactly what customers need."

There first was a need to place concrete and gravel for the project's batching and crushing plant's foundation. SAB and Agreconsa proposed using six Telebelt TB 130 telescopic belt conveyors for that portion of the project. GUPC accepted the proposal.

"The reason the Telebelts were the ideal equipment choice for this portion of the job was because they do not need to be permanently mounted to the ground or a super-structure," Weiglein comments. "In the event the equipment had to move due to changing terrain conditions the TB 130's quick setup and tear down provides that flexibility and mobility that GUPC expressed was a neccessity on the job site."

"Another benefit of the Telebelt is that multiple types of material can be placed with one piece of equipment, and in the same day," explains Peter Mamopulakos, owner of Agreconsa. "Since both concrete and gravel are being placed on the site this feature is an invaluable asset. The TBs are true multi-taskers."

The Telebelts arrived on site in August 2010.

Don Matthews, Putzmeister's field service technician for Telebelts, went out for the first two weeks the Telebelts were on site to help start up the equipment, train the local operators, and ensure the customer had everything they needed.

"We always send one of our field service technicians out on new start ups to ensure there is nothing in question for the customer and they feel comfortable operating their new piece of equipment," says Weiglein. "For this project, Don is on site once every quarter to check in with the customer."

"To-date we've placed about 26,160 cubic yards of concrete for this portion of the project, and the smooth, surge-free conveying of the material has helped to keep the project on schedule," notes Weiglein.

A Look Ahead
The Telebelts will also be instrumental in placing concrete for the water reutilization basins. This portion of the project begins this summer and the Telebelts will convey approximately 654,000 cubic yards of concrete.

In addition to the Telebelts, SAB and Agreconsa will be delivering a considerable amount of equipment, ranging from Thom-Katt trailer pumps to boom pumps for other portions of the project.

The Third Set of Locks By the Numbers*

*Approximate quantities for civil work on the conceptual design of the Third Set of Locks. Numbers are from March 2007 from the Panama Canal Authority (ACP).

Here are the top seven maintenance tips and tricks to keep the engines in your rental fleet in premium condition to improve your customer’s productivity on the jobsite.
Briggs & Stratton Corporation
April 9, 2021
Follow Us