Returning to Work on the Same Jobsite after 19 Years 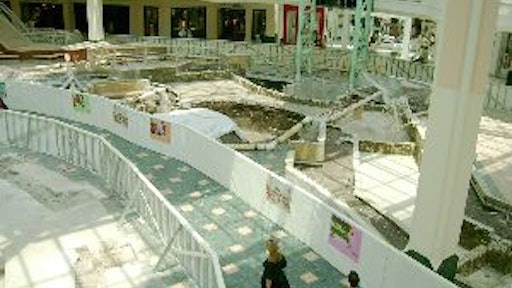 When the Palm Beach Florida area was growing into the north end of the county it became apparent that a new shopping venue was required. After all, these residents wouldn't want to travel all the way to the Island of Palm Beach to shop at Sak's Fifth Avenue or Nordstrom (and why should the Rich & Famous have to?).

Pepper-Southern General Contractors of Atlanta Georgia was hired by the owner (Forbes-Cohen Florida Properties) in 1988 to construct this new project 'The Gardens Mall' in Palm Beach Gardens, Florida. Pepper-Southern called in Griffin Dewatering to provide the proper methods and materials to be utilized when dewatering the proposed structures' footings. The proposed footings were designed to support both floor slabs & structural columns as well as the new glass enclosed central elevator and adjacent water features/fountains. This work was successfully concluded in 1999, and the mall opened with great success. Now 19 years later some of the shine is gone, the tile grout is stained, the elevator is old and it's time to give the mall a facelift.

Flash forward to 2007. Whiting-Turner General Contractors (Ft. Lauderdale Office) hires Griffin Dewatering of South Florida to provide a workable dewatering plan to facilitate the demolition of the old, construction of the new and maintain a "low profile" to accommodate everyday mall business.

Griffin's contract for services included dewatering of excavated areas where the new Grande Fountain, its control vault and the new elevator are to be constructed.

The problems that Griffin had to solve included:

The solutions that we provided were:

The result, another satisfied Griffin Client.

Dave Handy was the Project Engineer on this job and he can reached at: 954-969-8854 or dave.handy@griffindewatering.com for further information.