Flexible grade-indicating system helps small excavating business stand out, and save money, in a competitive climate 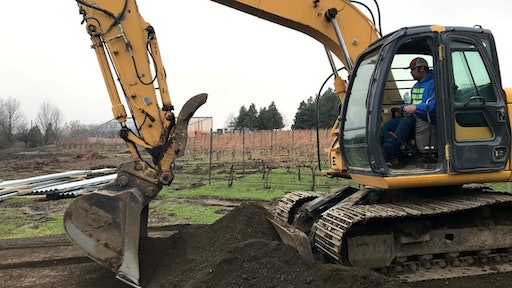 Levi Ferraro’s story reads like the famous legend of a successful contractor – a tale that is destined for a happy ending. It’s the real-life story of how he operates a thriving excavation business, how he overcomes challenges, and how it exists today as a family enterprise.

“Simple” is the byword that Ferraro embraces as he builds his company.

Ferraro started Ferraro Excavation at the age of 21. Now, at 34, he tells the story of how his business embraced new technology with energy and enthusiasm. For Ferraro, it’s simply about doing what he loves, and doing it well.

The city of Walla Walla, in the southeast corner of Washington State, is set in a fertile valley hemmed in to the east by the Blue Mountains. The climate is generally mild for most of the year, but occasional blasts of cold winter weather cannot be discounted.

On any given day in College Place, a Walla Walla suburb, you might see excavators, a big track skid steer loader, and a dump truck depart to various projects from Ferraro Excavation’s shop. The equipment might be headed out to grade a building pad, install a septic system, or construct a storm drainage facility. Ferraro’s customer base includes farmers, light industrial developers, and residential builders.

One simple technology solution helps keep his workforce to a minimum.

Competition is a major challenge in Walla Walla excavating. Serving the city’s population of 40,000, there are nine companies that offer essentially the same services as Ferraro. In this congested business environment, a contractor must stand out from the pack to be successful.

Ferraro lives by an uncomplicated competitive strategy: “Be the best and the most affordable in town.”

The biggest challenge Ferraro faces is finding and keeping competent labor. But he found a simple solution with numerous unexpected benefits.

Ferraro’s story about how he solved his labor shortage reads like the script of a Hallmark movie. Sitting around the dinner table one night, Ferraro was talking shop with his wife, Amber. Business discussions often take place over a meal because Amber helps keep the office organized, takes care of billing, and supports her husband with invested encouragement.

Ferraro boiled down his dilemma: “If I could find something to take one person's spot – eliminate one person and not have to worry about him showing up on time, being a good employee, not whining all the time – then I could have two or three guys running around being efficient.”

Ferraro recalls what happened next, "So on Facebook one night, my wife's scrolling through it, and she says ‘Hey! Come look at this. There's a machine running with no grade checker!’”

They spent the next few minutes web surfing to find out more information about what they had just seen. They finally found a link that said “iDig.” The link led them to a Youtube video, and from there they started looking deeper into the system.

"Man, these guys are doing all kinds of crazy stuff and there's nobody out there checking grade!,” Ferraro exclaimed.

Next step: finding a source

On a mission to find out where he could obtain the iDig system, Ferraro made a call to Aaron Hanson, territory manager, with Pape Machinery in Pasco, WA. Hanson had extended above-and-beyond service to Ferraro in prior years, and the two had a strong working relationship. The phone conversation revealed that yes, Hanson was aware of the iDig system. In fact, Pape Machinery was in the process of adding the system to their product line.

Coincidentally, Pape Machinery was seeking someone to evaluate the new iDig system. A deal was struck and the system was installed on one of Ferraro’s machines. It was a perfect match.

Starting out with the new iDig on his excavator, Ferraro admits it took a little bit to figure out how to use it. But once he got through the initial learning curve, he was impressed by the performance.

iDig is a grade checking system that enables the operator to see the bucket of his machine in relation to grade on a graphic display in the cab. The system consists of four sensors, mounting plates, an LED display, and a control unit. There are no cables to connect – system components communicate wirelessly by radio. iDig sensors are powered by solar-charged batteries, eliminating the need to plug into a 120V AC outlet for charging.

Ferraro tells a story of several friends who do the same type of work that he does. They are all using high-end, name-brand laser systems on their excavators. They visited Ferraro’s shop to check out the iDig system. One person made the comment “Hey, this is really simple.” Ferraro responded “That’s why we like it. We clip the sensors in, we set our grade on the screen, and we go – and we’re spot on.”

Recently, Ferraro Excavation completed a 14-ft.-deep dry well system. An excavation this deep requires constant vigilance to avoid over-excavating the hole, and the subgrade must be cut precisely to conform to design grade.

Ferraro explained how easy it is to do these jobs with iDig: “You can literally set the bucket on the hub, look at the grade stake, and see what your cut is. Then from there, swing over and start digging.”

Safety is a major benefit of excavating with iDig. “We set the whole dry well system without anyone ever having to go in the hole,” Ferraro said. “They don’t even have to walk by the edge of the hole. It was totally a very safe environment.”

On septic systems installation, Ferraro claims cutting his time investment by as much as a day and half. When digging foundations, he now sends only one man and one machine. This frees up two men to work on other projects.

One system for three machines

Here’s a typical problem many excavation contractors face. Ferraro owns three excavators: a Caterpillar 304, a Kobelco 70SR, and a John Deere 135C. Each machine will need a grade checking system at one time or another to work most efficiently, but none needs the system all the time. The iDig system provides a simple solution.

Quick-connect cradles for iDig components reduce the amount of setup time. Once the system is installed and calibrated on a particular model machine, the configuration is saved in the system’s memory for future use. One iDig system can be deployed on any number of excavators. Swaps can be made quickly and do not require technical personnel.

“We snap it out of whatever machine we’re using that day,” Ferraro says. “The only issue we’ve ever had is when two guys go separate ways and need it. So we’ll probably get another system here pretty quick.”

iDig offers a system option that displays the orientation of the grading blade attached to some mini-excavators. Ferraro has a keen interest in this. He recently constructed a building pad using an iDig-equipped excavator along with his skid steer to grade the finished surface. With this system option, he would be able to do this type of job with just an excavator.

Levi Ferraro found the sweet spot for his excavating business with iDig. Would he have found it without a business-savvy wife’s scanning Facebook? Whatever the reason for his discovery, Ferraro Excavation is reaping the benefits: “Our productivity has gone up tremendously, I would say almost doubled. It’s really simple. It works really good,” says Ferraro.

For more information about the iDig System, visit www.inteqdistributors.com, and at iDig's CONEXPO booth No. BL446