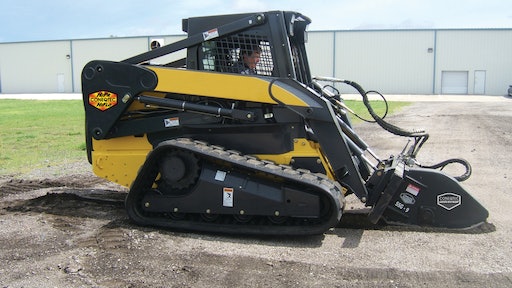 The slot cutter model SSG12 cuts a 12-inch deep by 1 1/2-wide cut. It can be mounted on carriers such as a skid steer or compact track loader.

The process at that time was to cut a rather large slot through the pavement that was around 6 or 8 inches wide and at a depth of 3 or 4 feet. This initial cut was done by a standard self-contained, dedicated rock wheel based on a trencher frame (utility tractor). The portion of the project that utilized Coneqtec-Universal's equipment employed asphalt mills to cut an 18-inch wide by 2-inch deep cut centered on the deep rock wheel cut. The purpose of this cut was to provide a T-fashioned repair after the cable was laid and the trench was then backfilled.

Because the trench cut extended below the actual asphalt surface into the road base, it was necessary to support the repair by greatly increasing the repair surface and using the existing road surface. This 'T' cut not only distributed the traffic load, but provided a better seal against moisture intrusion into the repair and then the trench. Moisture is one of the biggest enemies of asphalt and one of the most frequent sources of failure in a repair. The rough surface and edges of an asphalt-milled surface also provided a mechanical locking component to the repair.

Since then, microtrenching has emerged and has gained popularity with the recent advent of fiber to the premises (FTTP) installations. It is in use now in most parts of the world, with major projects in Europe, Australia and, most recently, with the Google project in the U.S.

Originally, microtrenching involved a process where a narrow, 1- to 1 ½-inch trench is cut in a street to a depth of only 2 inches, with the base course of asphalt utilized to support the cut. Because it cuts through only the top or wear course of the road, no T cut is required. Once the trench is made, a conduit is laid in the cut and the repair is made over the conduit with a special material. The process is quick and easy and, when completed, the fiber optics can be blown through the special conduit.

In many locations, a deeper cut is now being specified, since the shallow cut can be vulnerable during road surface repairs and other circumstances. In this case, the 1 ½-inch cut is made to a depth of 12 to 24 inches and extends into the base material under the road surface, where it is safe from damage. This process is still in an early development stage and the process varies from project to project.

Some projects are utilizing a smooth diamond saw blade cut. Two parallel diamond saw cuts are made, and the center of the cut is later excavated. This style of cut is very slow and does not leave a corrugated surface to which the repair can bond. Other projects are utilizing a microtrenching rock wheel to make a straight-sided cut. This leaves the corrugated, rough surface for the patch material to bond to, but does not utilize the T cut to ensure the load transfer and moisture seal.

Other projects are now starting to use a smaller version of the process that was developed and proven several years ago with the AT&T project. This utilizes the narrow 1 ½-inch wide cut, but is followed by a 2-inch deep, 12- to 24-inch wide milling process that gives the repair the load sharing ability and provides for a permanent moisture-proof seal.

Coneqtec-Universal manufactures two attachments for skid steers that are currently being used in the microtrenching process. One is the slot cutter model SSG12, which cuts a 12-inch deep by 1 ½-wide cut; the other is the rock wheel model RS600, which cuts a 1 ½-inch wide trench up to 24 inches deep. Both of these attachments are available with either a crumber or a vacuum port to remove spoil from the cut.

In some cases, a vacuum truck is utilized to remove the spoil just prior to installing the conduit. In this process, the material remains in the cut and can be driven on until the crews arrive to install the conduit. Then the cut is vacuumed clear and the installation process is completed.

The company's 12- to 24-inch wide asphalt mills are also used to finish the T cut by making a 12- to 24-inch by 2-inch deep cut to complete the repair.

The value of these products is that the 1 ½-inch wide microtrench can be cut by the first skid-steer attachment and then exchanged with a second attachment on the same machine for milling to complete the T cut. This provides a simple, one-machine solution for the microtrenching FTTP process.