Lift, Rip and Tear Up the Pavement

While hammers may be popular, there are productive alternatives for removing pavement. 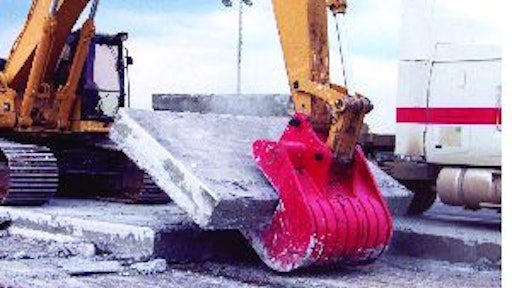 Breaking slabs of pavement with hydraulic hammers is not always the most effective solution. It takes time and effort, not to mention the cleanup process.

In some cases, attachments that can lift and remove complete sections of the slab make more sense. It saves time and often little or no cleanup is required. In addition, many of these attachments cost significantly less to operate than a hydraulic breaker.

An option for smaller jobs

Slab removal attachments are the most common alternative to a breaker. One example is the EDGE Slab Removal Bucket from CEAttachments. It is 21 in. high and 48 in. deep, with a working width of 24 in. Slabs up to 7.5 in. thick can be handled, and there are no moving parts. Three heavy-duty teeth with 1 1/2-in shanks are made of T-1 steel with replaceable points and rubberized flex pins. These teeth slide under the slab, lifting it up and leaving a clean area underneath.

"It's definitely an alternative to a hydraulic breaker," says Ron Peters, product manager, CEAttachments. The bucket is a simple, non-hydraulic-driven attachment that is compatible with a universal skid-steer quick attach. "The big advantage is the lower cost."

You do need to consider the weight of the slabs to be removed. "You need at least a 1,500-lb. machine," says Peters. The weight of the attachment itself is negligible. "It is 635 lbs., so it is not a super heavy attachment for a skid steer."

The slab bucket promises increased productivity on sidewalk applications. "You will get a lot more done in a very short time with the slab lifter bucket vs. a breaker," notes Peters. "It will last the contractor a long time and it is a lower cost attachment. The list price is $2,190." The three replaceable teeth on the bottom are the only wear parts.

One job that really benefitted from the EDGE Slab Removal Bucket was the Vietnam Veterans of America monument in Newburg, WI. This job required the removal of approximately 80 to 100 slabs of concrete sidewalk. Workers started by breaking up the sidewalk slabs into small pieces and loading it into a dump truck. This process proved slow as excess soil was removed and broken pieces of concrete were left behind.

The EDGE Slab Removal Bucket provided a more productive solution. It was designed for jobs like this, where slabs of sidewalk or other concrete needs to be removed, carried and loaded into a dump truck. The bucket was able to remove the sidewalk in a fraction of the time it would have taken to break it up, load it into buckets and haul it to a dump truck. Broken pieces of concrete were placed on top of the next full slab and lifted along with it. This saved time and kept the area around the removed slab clean and ready to be filled with soil, then seeded.

One application where the slab removal bucket may not work well is with broken concrete. "When you have smaller pieces of concrete, you are only going to fit so much and it would not make sense to use it," Peters explains. Skeleton buckets are better suited for handling broken concrete. "Anything 3 in. and larger will be held in the bucket." Dirt and stones that fall through the bottom can be used for fill.

Get a handle on larger slabs

"The Slab Crab is designed to effectively remove concrete with a purpose-built open-sided bucket," says Tracy Black, Kenco. Slabs slide into the bucket. When it is tilted back, the slabs are held into place for safe movement. A flat-bottom design allows the operator to avoid disturbing the sub-base.

Black notes, "The Slab Crab is ideal for bridge decks. Contractors typically precut their slabs down the beam centers. Once completed, the operator can drive the Slab Crab-equipped excavator over the bridge deck to start the removal process. Using the Slab Crab for bridge deck removal greatly reduces the amount of debris. Due to the design of the bucket, slabs can be stacked or loaded with little effort."

Many contractors report successful results using the Slab Crab. For instance, Oakgrove Construction Inc. is a general contractor specializing in heavy/highway construction with an emphasis on bridge replacement and reconstruction. Its base of operations includes the eight counties that comprise western New York. "The Slab Crab is safer and much less labor intensive than other methods of removing slabs," says Bob Spengler. "Debris isn't much of a factor, because the slabs can be removed intact."

Perrett Construction, Valentine, NE, also benefits from removing slabs intact. "We use the Slab Crab three to four times a year removing bridge decks," says Greg Perrett. "Many bridge removals are made over water or wetlands that can't have concrete dropped in them. We saw the decks and remove the concrete with the Slab Crab Bucket. Most of the time, we are able to give the slabs to a landowner. Previously, we demolished decks with a wrecking ball, cut the rebar with torches, hauled the rebar off to a scrap yard and then had concrete to dispose of. The Slab Crab greatly reduces labor and disposal costs."

Then there are the time savings. "At times, we use it every day," says Ernie Troiano Jr., E. Troiano & Sons, Wildwood, NJ. "It works great on sidewalks and driveways. Removing bridge decks is now a one-man job compared to a two- to three-man job."

G. Marchi & Son, Columbus, OH, cites dependability via a simple design. "Our Slab Crabs are used every day," says Mark A. Marchi. One reason is their construction. There are no bearings, nuts, bolts, screws or grease fittings - zero maintenance. "After removing over 100,000 sq. ft. of concrete, only the paint is scratched. We use the attachments mainly to remove sidewalk for wheelchair ramp construction."

Some contractors discover better methods using existing attachments in their fleets. One is Bobcat Bob, headquartered in Olympia, WA. This contractor performs a range of tasks with its compact equipment fleet. It digs swimming pools, performs landscape rock work, does a variety of demolition work -including inside buildings -digs utility trenches, etc.

"I probably have 24 different attachments," says Bob Aldous, owner. But one attachment in particular has proven very useful -a Bobcat ripper tooth. "I used to have a jackhammer and I just sold it last year because I never used it." Instead, the ripper tooth has become his preferred method of concrete and asphalt removal. "It can tear out 8- or 10-in. concrete. Sidewalks and driveways can be picked up in big chunks and thrown in the back of the truck."

Dividing up a large piece of asphalt is rather simple. "You poke that ripper through the asphalt in the parking lot and just track your machine backwards," explains Aldous. "It will cut a nice, big line if you are going to remove a lot of asphalt." The ripper is also used in demolition to pull down foundation walls, etc.

Bobcat Bob uses the ripper tooth to cut granite for its landscaping work, as well. Of course, these applications create a lot of wear. "You start doing concrete and rock and that is going to wear the attachment out. I do tons of granite. I usually go through two ripper tooth attachments a year," says Aldous. But for approximately $700 a piece, it makes a lot of sense for the contractor. In fact, it is his favorite attachment. "It stays right here on my truck."

There are applications that still require a hammer. "The various times that I need a hammer, I will go rent it," says Aldous.

According to Leading Edge Attachments, its customers have been using several of its ripper products -which fit any excavator or backhoe from 6,000 to 300,000 lbs. -for pavement removal. "We have reports that the Multi-Ripper mounted on an excavator is three to four times faster than hydraulic hammers for removing concrete," says Lee Horton. "This attachment does not require the use of hydraulics and is considerably less expensive as compared to a hammer."

But there are limitations. "The Multi-Ripper will not break up the concrete if it is in the form of a large loose piece. However, if the material is being removed from a road or a bridge and the operator is able to lift and roll the staggered shanks that are on the arc of the Multi-Ripper, then the concrete can be ripped into small football-sized chunks from the start," Lee indicates. "The Multi-Ripper is considerably easier on your machine compared to a hydraulic hammer, even though it produces about 8.5 times the force produced with a standard excavator bucket. The bucket has also been widely used for ripping piles of recycled asphalt and for ripping frozen asphalt for rapid utility repairs."

Then there is the Single Pointed Ripper Bucket, which has a single ripper in conjunction with a bucket-shaped heel in the back that allows you to pry slabs, curbing or sections of rebar. "The Vee shape allows for some scooping of rubble and cradling concrete boulders and sections of concrete or asphalt," says Lee.

There are other concrete removal options, as well. Justin Odegaard, attachments product manager, Bobcat, touts the advantages of a drop hammer. "The benefits are that it is quiet. There is very little vibration relative to a hydraulic breaker/hammer, and when you have large concrete, flatwork removal jobs (5 in. of concrete or thicker), it tremendously increases production over a hydraulic breaker," he explains.

Wheel saws can also prove useful for cutting out sections of concrete/asphalt.
"If you're cutting out a section in the middle, it provides a nice, clean edge, as well as a relief area to get your breaker started," says Odegaard.

So while the hydraulic hammer has its place, there are instances where it pays to explore other alternatives.