A Link-Belt long-reach excavator, Morooka rubber track carrier and Chicago Pnuematic hammer were used to tackle both the application and environmental requirements. 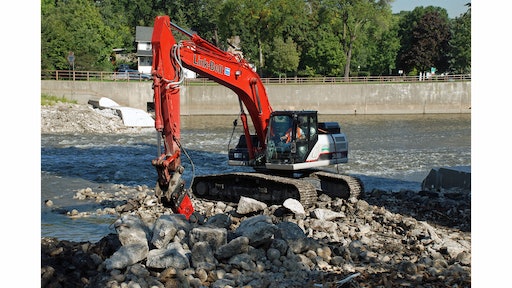 Dam removal presents its own unique set of challenges and the proper tools can make all the difference. So when the Army Corp. of Engineers awarded Illinois Constructors Corp. the contract to remove Hofmann Dam across the Des Plaines River near Riverside, IL, the company relied on specialized tools to successfully complete the project.

Elburn, IL-based Illinois Constructors Corp. has established a reputation for the successful building of roadway, railway and marine projects. “We are a small- to mid-size general contractor,” reports Jim Carson, project manager.

The company traces its roots in the Chicago area back to the mid-1920s. This general contractor has the ability to self-perform work with its own skilled union workforce and generally preforms structural and site demolition, excavation and concrete forming and placement. “Our company is predominately heavy civil construction – mainly bridges and structural work,” says Carson. The company also removes dams and rehabilitates shorelines.

The scope of the project awarded by the Army Corp. of Engineers involved much more than merely the dam removal. “The removal of the dam really wasn’t a large amount of work,” notes Carson. “There were quite a lot of other things that had to happen.”

Accomplishing this feat presented a unique challenge. “We had to install 75% of the toe stone prior to removal of the dam,” notes Carson. Much of this material was to be placed underwater, so you really could not see where it was being placed.

In order to place this stone you needed to gain access for the equipment. “So to start off the main challenge was to establish a location where we could put a road into the river.” The thickness of the required road also had to be calculated to support the weight of the equipment that would actually place the stone.

There was also a downstream portion of the project in Riverside. “It was a low point that was protected by walls on both sides,” recalls Carson. One or two times each year this area would flood the adjacent park. “It would not drain properly. The only way for the water to drain out would be for the water to evaporate. “We re-graded that whole pond and installed a culvert so when it does flood it will properly drain out the way it should.”

Illinois Constructors Corp rented a Link Belt 240 LX Long Front to place the toe stone. This is a 58,900-lb. excavator with a 26 ft. 3 in. arm length and a 48-ft. digging depth. It can handle buckets ranging from .82 to .95 cu. yds. The long-front machine made it possible to effectively reach into the river and place the stone.

To get the stone from the staging area to the Link Belt 240, Illinois Constructors Corp. rented a Morooka MST-2200 rubber track dump carrier with a hydrostatic transmission which able to navigate the river terrain. “Basically it was capable of handling 9,000 or 10,000 lbs. of stone,” notes Carson. “We used that machine to track back and forth in the water between where the long-boom machine was placed and the rock.”

The company’s Link Belt 300 would place rock in the Morooka from the stockpile. “The Morooka was moving the rock to the job location where the long-boom machine would place it,” says Carson. “That was basically the operation for about a month and a half, placing the toe stone in the river along the river embankments.”

Then the Army Corp. of Engineers gave Illinois Constructors Corp. the green light to begin removing the dam. The company was able to utilize its Link Belt 300 excavator with a 3,970-lb. Chicago Pneumatic RX25 hydraulic hammer for 20- to 33-ton carriers to actually remove the concrete dam. This specific hammer was carefully chosen for the task since there was a historic tower adjacent to the dam. “We had requirements in our contract to monitor vibrations and ensure the Army Corp. of Engineers that we would not damage that structure,” says Carson. “So we just couldn’t use the largest hammer that we could find to start breaking out the dam.” The hammer was sized to specifications provided by an engineer who performed a structural analysis.

Since this hammer was mainly to be used under water, a underwater attachment kit was necessary. This kit uses an air compressor to force water out of the hammer and prevent damage.

“It took about a month to remove the dam itself,” says Carson. While the majority of the dam was removed, plans called for leaving some of it in place. “We just utilized small hand chipping tools for the portions of the dam that were left in place.”

An access road also had to be built to the dam so the broken concrete could be hauled away. The decision on where to place the haul road was critical. “We were allowed to use some of the broken concrete from the dam to assist in our haul road,” says Carson. “But it was really a challenge to make sure we placed the haul road in a location where it was productive and we were able to remove the most amount of concrete per hour.”

Thanks to careful planning, the rubber tracked dumper and the long-reach excavator, Illinois Constructors Corp. was able to move and place the stone much faster than anticipated. This saved both time and money. “Those two machines really made this a successful project,” claims Carson.

Of course working in a waterway presented special environmental concerns. Two measures were taken to mitigate any environmental impact. The first was a turbidity curtain installed on the downstream side of where the rock material was being placed. “That was to avoid any sediment,” notes Carson.

Then the company replaced all of the hydraulic fluids with Conoco Ecoterra to minimize the consequences of a leak, which never occurred. Ecoterra Hydraulic Oil is a zinc-free antiwear hydraulic oil specifically developed for use in industrial and mobile equipment operating in environmentally sensitive areas. It is nontoxic to fish and aquatic species as determined by OECD Test Method 203 1-12, and is classified as inherently biodegradable by the OECD Test Method 301B. It passes the visual “no sheen” requirements of the U.S. EPA Static Sheen Test.

This oil is much more expensive than traditional hydraulic fluid. “It actually costs a significant amount of money to get the oil that was in the Link Belt 300 replaced with the EcoTerra,” says Carson.

But these efforts were rewarded with a successful project completion with minimal environmental impact.