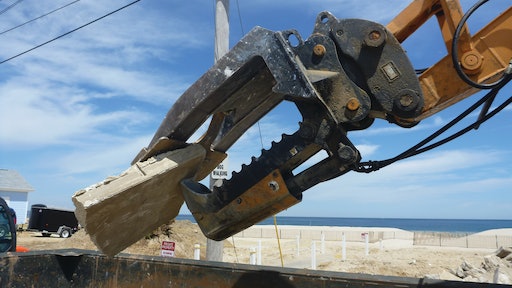 The Mega Beak allows OBPM Construction to precisely pick apart a house or concrete slab and crush the material into more manageable pieces for loading into dumpsters.

The storm left a swath of destruction across the length of the island, a narrow band of land approximately 15 miles long and from half a mile wide to as little as a couple hundred yards across. The island is a highly popular vacation spot, so the majority of the buildings destroyed were small summer homes — typically around 20’ x 28’ or 20’ x 36’ two-bedroom bungalows — many of which were built back in the 1950s. “It’s just row after row of these little cottages,” Costello notes.

In spite of the transient nature of most of the inhabitants, and the seemingly modest accommodations, the small communities across the island were sent reeling in the aftermath of the storm. “It’s heartbreaking,” says Costello. “People come here because they vacationed here when they were children, or their parents owned a house here and it was passed down from generation to generation. It’s a very tightly knit community for that reason. There are people who buy here who could literally buy anywhere they want, but they choose Ocean Beach because they have it in their blood, so to speak.”

Now those individuals are eager to clear the wreckage and rebuild.

OBPM Construction was originally founded as Ocean Beach Property Management. “When we first started the business, we did property management for homes that I owned. The business grew into a new construction and remodeling firm, so the property management was sort of a misnomer for us,” says Costello. “But people recognized our logo, because we had OBPM on all of our trucks, so we decided to rename the company.”

Today, OBPM Construction operates as a full-service remodeling firm and new home builder, self-performing all aspects of the design and construction of residential dwellings, including the demolition of existing structures. “We started doing our own demolition about two years ago,” says Costello.

This service, combined with the company’s presence and involvement in the local community, has enabled double-digit annual growth. Prior to Hurricane Sandy, OBPM was already doing about 10 to 15 houses per year using its 6-ton Kubota U55 excavator; a Kubota SVL75 compact track loader; and a recently acquired Vermeer S800TX tracked mini loader. But once the storm hit, it quickly became obvious more, and bigger, equipment would be needed. “Sandy hit in October and we already had 40 or 50 demos scheduled by the end of the year,” says Costello.

OBPM initially took delivery of a new Kubota KX080 from POWERCO Equipment, the local Kubota and Case dealer in Clinton, NJ. But it didn’t take long to realize the 9-ton excavator wasn’t the right machine for the job.

“I realized this is a bad situation out here. We were going to need to do more demolition. We probably needed to get into pile driving, as well,” says Costello. “So we sent the KX080 back and I bought a Case CX235C SR, which is a much larger machine. I figured we can do our demos a lot faster, and now we can put a pile driver on it and be able to bring that operation in house, as well.”

When OBPM first got into demolition, it used the U55 with a bucket and thumb attachment. “Even though the thumb was hydraulic, we found it really isn’t the ideal tool,” Costello states. A grapple or fixed thumb wasn’t an option either. “When you’re picking up concrete, for instance, when you roll the bucket away from the thumb, typically at about 90° you lose your load.”

Costello began to investigate other alternatives and came across the Exca-Beak from Daniel Mfg. It proved so successful that Costello ordered the larger Mega Beak for the 28-ton CX235C SR. Since acquiring the excavator in January, the Mega Beak is the only attachment the contractor has used on the machine.

“The Beak has been on the machine since day 1 and we use it exclusively for demolition,” says Costello. “It has a tremendous amount of crushing power, so we’re able to precisely pick the house apart and then crush it up. We’re getting a lot more volume into our dumpsters.”

Costello equates the operation of the Beak to how a person’s thumb and fingers stay together as the wrist is rotated. “I can have the boom and the stick pointing out horizontally, grab a piece of building component, lift it, curl it toward me, crowd it in, do whatever I want with it,” he states. “That’s where the Beak really shines — being able to have all that articulation and clamping capability through the full range of bucket motion. I’m able to grab a piece of roof, for instance, and just nibble away at it and expose what I need to expose.”

This allows for more effective deconstruction. All houses are prepped prior to demolition to remove recyclable or reusable materials. Then, as the demolition progresses, the attachment is used to selectively pick out segments that may allow for further reclamation.

“We’re able to maybe pick up a wall segment, and set it down on the ground so the guys can cut out some wire or pipe. We’ll swing over to another part of the demo while they are pulling apart that particular piece of wall section. Once they’re clear, we’ll pick up the section, put it back into the pile, crush it up a little more and pack the dumpsters,” says Costello.

The attachment has also proven effective for concrete removal. “Ninety percent of these houses are all on concrete slabs, so we use the Beak to pull up the slab,” Costello says. “We’ll either pick it up and load the dumpster or the truck or we’ll pull up the concrete, break it into smaller, manageable pieces with the Beak, and then bring the Kubota loader in with the rock bucket to let the sand sift through and load the dumpster.”

Given the backlog of work OBPM Construction has to accomplish over the next three to five years, the right tools are crucial to staying productive and on schedule. “We’re doing two houses a day now,” says Costello. “Without the Beak, I don’t think we would be able to keep up the pace.

“That’s the reason I invested in the equipment,” he continues. “I know that I would not have been able to keep up with the volume of work coming to us. I would have had to start turning work away, and that’s not how I’m wired.”

The investment is also enabling the company to perform more aspects of its projects. OBPM does sub out services such as electrical and plumbing, but most other services are kept in house. “Now we’re in control of the demolition, the foundation work, the piling work,” says Costello. “Our projects are going to move along faster, and we’re going to be able to take on more work because we’re not going to be relying on outside [contractors].

“We’re in control of the project,” he adds, “and hopefully, we’ll be able to do it quicker and more efficiently, and to a different standard than others who don’t have the resources and the structure that we have.”

Putting Rubber to the Road

The sandy shores of the Barrier Island present an ideal scenario for tracked machines. All of OBPM Construction’s equipment is equipped with rubber tracks, including the new Case CX235C SR excavator. “We bought bolt-on rubber shoes for that machine, too,” says OBPM’s Tom Costello.

OBPM is in an enviable position — all of its work is currently within a two-mile radius of its shop. “We have a state highway that goes right down the middle of our community. With the rubber shoes, we’re able to walk the machine across the highway without fear of damaging the road surface. We’re able to walk this machine most anywhere we want. In fact, I have yet to call a lowboy in to move it,” says Costello.

With the rubber shoes, the excavator can travel along the road without damaging the surface, and easily traverse the island’s soft, granular soils. “They’re expensive,” Costello acknowledges, “but they’re definitely going to pay for themselves.”