Artliner-BLS Clip-On Pads rack up over 10,000 hours while working on two different excavators 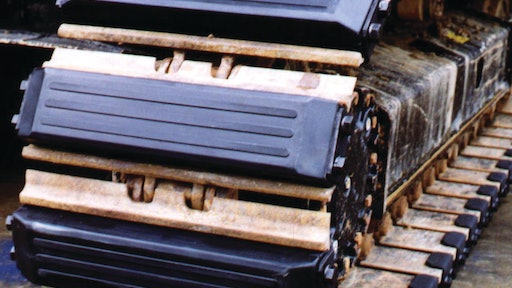 The Artliner-BLS Clip-On Pads used by Golden Triangle Construction delivered a combined 10,000 hours on a Kobelco SK120 and a Caterpillar 312 excavator.

At the AED Summit & Condex 2012, BLS Enterprises, Inc. will be exhibiting one of its rubber Artliner-BLS Clip-On Pads used by Golden Triangle Construction in Imperial, PA, for a combined 10,000 hours on Kobelco SK120 and Caterpillar 312 excavators.

Brad Abbott, Golden Triangle's equipment manager, bought a set of 600mm clip-on Artliner-BLS rubber track pads in March 2002 for his Kobelco SK120 to protect the asphalt and concrete work areas, and finally replaced the pads in July 2010. During those eight years, Abbott racked up over 10,000 hours of work using the pads on the two different machines. Also during that time, Abbott purchased eight more sets of the track pads for his other excavators.

What Track Loader Tread Pattern Should I Buy?

How to Install Over the Tire Tracks

Follow this step-by-step guide to ensure installation of your over the tire tracks is done correctly.
Summit Supply LLC
February 28, 2020

When Should You Replace a Rubber Track?

Continuous machinery usage can lead to a decline in your tracks which can lead to track failure.
Summit Supply LLC
February 25, 2020

Summit Supply's over the tire pad assemblies convert wheeled skid steers to rubber tracks creating two machines in one with more control and ease of use.
Summit Supply LLC
January 24, 2020

More open design allows machine to shed debris better, reduces vibration and allowed Bobcat to incorporate up to a 60% increase in fuel capacity on some models
February 3, 2016

The Maxim track's unique switch back system that enables the rear tracks to extend forward under the vehicle to nearly the rear of the front tracks taking weight off the front end
Mattracks
January 29, 2016

Bobcat Contest is Looking for the Toughest Working Tracks

How to Get Maximum Life from Rubber Tracks

Keeping skid steer tracks clean, maintaining their tension and inspecting them regularly can cut your operating costs significantly. Here's what you need to know
May 2, 2013
Attachments

Track module lays down 33 in. of traction and flotation for half-ton pickup trucks in soft underfoot conditions
Mattracks
April 10, 2013

Despite the popularity of compact track loaders, add-on skid-steer track systems show they still have a place on construction jobsites.
Rod Dickens
January 26, 2011

Here's a snapshot of available undercarriage and track options.
September 20, 2010
Follow Us