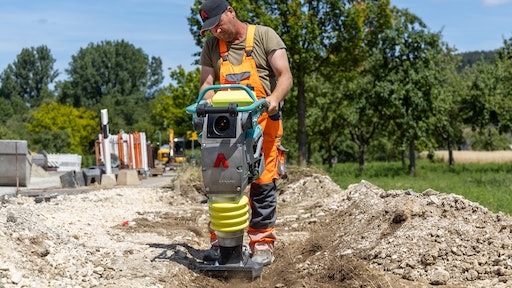 Soil compaction might not seem like the most exciting topic, but the proper completion of this step is essential. If soil compaction is not performed adequately, settlement of the soil could occur and result in unnecessary maintenance costs or structure failure. Almost all types of building sites and construction projects utilize mechanical compaction techniques, so it’s important to have the right equipment on hand to ensure this step is completed right the first time.

Different types of compaction equipment have been designed to suit various applications, but the end goal is the same: remove air voids from the soil with applied force to provide a solid foundation. For mechanical soil compaction—that is, compaction that accelerates the natural process of the soil settling and, in some cases, makes construction possible in marginal building sites—you have three main types of equipment to choose from.

To choose the right equipment for your job, you need to first understand something about soils and how they are compacted. Soil can be broken down into two main categories: granular and cohesive.

Granular soils are loosely bound, which means that moisture drains easily. They make an excellent base for building on and do not require impact or ramming compaction. Granular soils consist mainly of sand and gravel. The particles are coarse and large enough to see with the naked eye and can be molded, but will crumble easily.

These soils are best compacted with vibration energy, which reduces the frictional forces at the contact surfaces, allowing the particles to fall freely under their weight. At the same time, as the soil particles are vibrating, they become momentarily separated from each other, allowing them to turn and twist until they can find a position that limits their movement.

Cohesive soils are made up of silts and clays. The particles are very small and feel smooth when rubbed between your fingers. When wet, cohesive soils are sticky and can be molded or rolled into almost any shape. When dry, this soil type tends to be very hard and difficult to crumble.

Cohesive soils are best compacted by impact force. The impact force of a rammer or trench roller causes a shearing effect that squeezes out air voids and excess water between the particles.

All vibratory plates—not just reversibles—are suited to granular soils, such as sand or gravel. Cohesive clay or silt-type soils, on the other hand, are best compacted by a trench roller or rammer.

Once you know the type of soils you will be working in, you can determine which piece of equipment is best for conditions to ensure you’re getting compaction safely and efficiently. Vibratory plates on rammers and plate compactors are very maneuverable so they're ideal for confined areas. Rollers have the advantage in larger, open areas where there is plenty of room to move around.

Rammers deliver a high impact force making them an excellent choice for cohesive and semi-cohesive soils. Rammers get compaction force from a small gasoline or diesel engine powering a large piston set with two sets of springs. The rammer is inclined at a forward angle to allow forward travel as the machine jumps.

Vibratory plates are low amplitude and high frequency, designed to compact granular soils and asphalt. These machines are easy to maneuver in tight, confined areas such as trenches, along walls, and around pipes. A forward directional plate has one exciter shaft with an eccentric weight that generates the centrifugal force to move the plate forward, plus supply vibration to the ground. With a reversible plate, there are two exciter shafts, each with an eccentric weight. They are timed in such a fashion that you can turn the shafts in the opposite direction and the same force that carried the plate forward now carries it in reverse.

Because reversible plates have two shafts and thus two weights, they impart more energy into the ground than forward plates with only one shaft. In addition, they can compact thick lifts. Some of the larger reversible plates can successfully compact lifts of material up to 30 in. thick.

The name "trench roller" tends to pigeon-hole these units. Trench rollers vary in width, from 24 up to 34 in., depending on the manufacturer and can be found doing foundation work, working around curbs and walls, and doing site prep. While trench rollers work basically the same way as reversible plates, they usually have only one exciter shaft in the center of the machine. Unlike reversible plates, which use centrifugal force for propulsion, trench rollers usually have a separate drive system that can be mechanically or hydrostatically driven.

No matter what type of machine you use, compaction needs to be done the right way to ensure the success of your project. Therefore, the equipment needs to be operated properly to achieve the desired results.

When in use, vibratory compactors use a combination of dynamic and static loads that deliver a rapid succession of impacts to the underlying surface from where the vibrations, or pressure waves, are transmitted through the material to set the soil particles in motion. This virtually eliminates the internal friction and facilitates the rearrangement of the particles into positions that result in as low a void space and as high a density as possible. The increase in the number of contact points between the particles leads to high stability and strength.

Like many things, soil compaction is an area where you can get too much of a good thing. Soil can be over compacted, which can cause soil to break down and cause segregation in soil mixes. As a result, there could be weaknesses in the compaction layers of sub-bases.

During compaction of soil, the machine's energy is directed and consumed by the soil. Once the soil particles are densely packed, this energy will be reflected to the machine and the operator instead of being consumed in the soil. Consequently, the most practical and obvious sign of over compaction is the reaction of the machine being used. As a general guide, experts advise limiting passes over the material to three times for a rammer and four times for a plate.

Realizing this was an issue, equipment manufacturers have been developing technology to ensure compaction is being completed properly.

BOMAG has the optional ECONOMIZER compaction measurement technology available for plate compactors, trench compactors, and single drum rollers as well as double drum rollers. This type of technology aids the operator with the necessary “intelligence” to know when to stop rolling/compacting and makes the operation more controlled, more consistent, and more efficient in terms of wasting fewer passes, burning less fuel, and putting fewer hours on the equipment.

Handheld compaction equipment has seen improvements over the years in hand/arm vibration protection for the operator, reduced noise, and optional compaction meters that assist operator productivity. All of these options have been designed to help ensure proper and safe operation on the jobsite.