A Grove GMK5165-2 crane was used to remove the main statue from the façade of a cathedral damaged in February's earthquake in Chile. 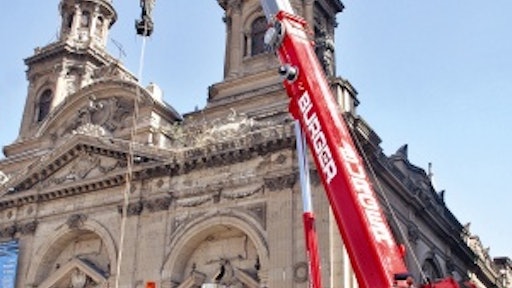 A Grove GMK5165-2 was used to remove the main statue from the façade of the Metropolitan Cathedral of Santiago, Chile, which was damaged in an earthquake in February this year. The bronze statue was at risk of falling.

Raul Burger, owner of Burger Gruas, a leading crane rental company in Chile, donated the labor and use of his Grove all-terrain crane for this project. "Chileans will feel the aftermath of the earthquake for quite some time," he said. "Repairing this great national monument is just one sign of recovery, and our company is honored to play a role."

Hundreds of onlookers watched as a fire truck hoisted a rigger in a man basket to the roof of the cathedral, where a worker carefully secured and rigged the statue for lifting. It was then lifted slowly down to the bed of nearby truck.

For the lift, the crane was configured with 54 m of boom, and the radius was 28 m. The outriggers were fully extended and used substantial cribbing because the crane was positioned over a subway tunnel. Maximum capacity for the crane in this configuration was between 9 t and 10 t, more than enough capacity for the statue that weighed between 3 t and 4 t.

Burger said that while the crane was oversized for the project, his company wanted to have complete confidence on the project. "This was such a high-profile project," he said. "We did not want to take any chances with our choice of crane, in either capacity or technology. And we are very happy with how the job went. The crane performed very smoothly."

The Grove GMK5165-2 has 13 counterweight configurations that allow both versatility and a maximum capacity of 165 USt. Outside the U.S., the crane is called the GMK5130-2 and has a maximum rated capacity of 130 t. The maximum main boom length is 60 m. The crane also has a bi-fold lattice swingaway jib that extends from 11 m to 18 m, allowing an overall maximum tip height of 81 m.

The Metropolitan Cathedral of Santiago became a National Monument of Chile in 1951. Its location dates from the city's original layout from 1541. Construction of the present church dates from 1745.

About The Manitowoc Company, Inc.

The Manitowoc Company, Inc. is a multi-industry, capital goods manufacturer with over 100 manufacturing and service facilities in 27 countries. It is recognized as one of the world's largest providers of lifting equipment for the global construction industry, including lattice-boom cranes, tower cranes, mobile telescopic cranes, and boom trucks. Manitowoc also is one of the world's leading innovators and manufacturers of commercial foodservice equipment serving the ice, beverage, refrigeration, food prep, and cooking needs of restaurants, convenience stores, hotels, healthcare, and institutional applications.