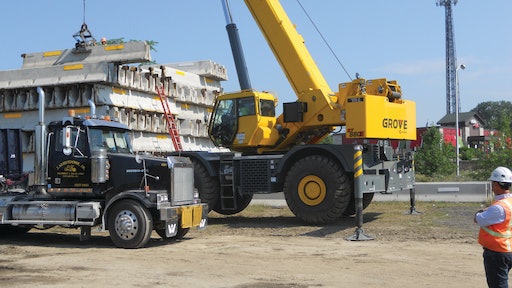 The Grove RT880E performed a variety of tasks including moving the highway’s barrier walls to set up lane structures and construction zones.

When A. Servidone Inc./B. Anthony Construction Corp.-JV (ASIBACC) was charged with overhauling an overpass and entrance ramp to Route 84 in Middletown, N.Y., the joint venture chose a Manitowoc 11000-1 crawler crane and a Grove RT880E rough-terrain crane to complete the project.

Due to the area’s large population and traffic demands, the joint venture needed to complete the job quickly. The combination of Grove and Manitowoc cranes was ideal, as it enabled a fast setup on the jobsite, as well as maneuverability on the rugged terrain.

The 80-ton capacity of the RT880E enabled ASIBACC to move in and set up for lifts without the need for additional counterweight. Taking advantage of the crane’s 128-foot boom, ASIBACC performed a variety of tasks, including moving the highway’s barrier walls to set up lane structures and construction zones.

The Manitowoc 11000-1, which has a 110-ton capacity and 200-foot lattice boom, was used for driving piles as well as placing large sheets of structural steel for ground retention so that pile driving could be performed. It also placed large, precast, arched-box culverts.

“We chose the Grove RT880E and the Manitowoc 11000-1 because of the versatility of these two machines,” said Tim Altman, a project engineer ASIBACC. “With so much action going on at all times and the tight time limitations, these two cranes allowed us to complete the operations in a timely, efficient manner.”