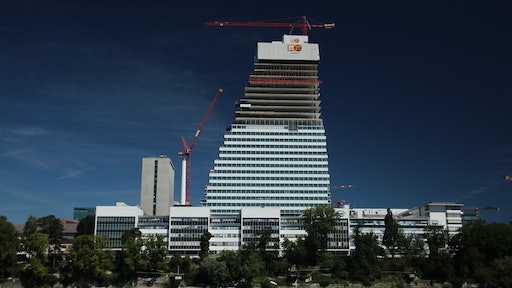 Currently under construction, Switzerland's Roche Building 1 will the the country's tallest building at 584 feet. General Contractor Marti AG is using WOLFF tower cranes, including the highest construction crane in Switzerland with a hook height of 669 feet, to raise the building skywards.

In addition to its impressive height, it was also the unique design of the Roche Building 1 with a tapering silhouette at the top, which required a sophisticated crane concept. To tackle these challenges, the WOLFFKRAN team closely cooperated with both the logistics specialists of the contractor and the architects of the building.

A WOLFF 7532.16 saddle jib crane with a 230-foot jib and maximum tip load capacity of 4 tons was set up at the rear of the building. With the building rising by one level every two weeks, the crane gradually climbed alongside the high-rise to its final tower height of 628 feet (hook height of 669 feet including portal base). In purely static terms, the crane would have done with just three ties to building. The special construction of the façade however called for more bracings.

Two WOLFF cranes were used on the side of the building that tapered upwards. At first, a WOLFF 6023.8 was employed. However, after a certain height, the distance to tie the saddle jib crane to building just became too big and it had to be replaced by a WOLFF 180 B with a 148-foot jib. Unlike a trolley jib crane, the compact luffing crane does not have to stand above the building, since it can easily slew past the sides of the building structure thanks to its movable jib which can be raised up- and downwards.

Besides the design of the building, the location of the building next to a very busy street, which could not be closed during the take-down of the WOLFF 7532.16, also challenged the construction team. A comprehensive safety concept had to be implemented, which went so far as having the service technicians secure tools and other working material to their persons and additional safety nets set up.

Now that the WOLFF cranes have gone, the last construction workers will soon be leaving the Roche Building 1 as well. The new offices of the pharmaceutical company F. Hoffmann-La Roche AG are scheduled to open this year and will provide space for around 2,000 employees.